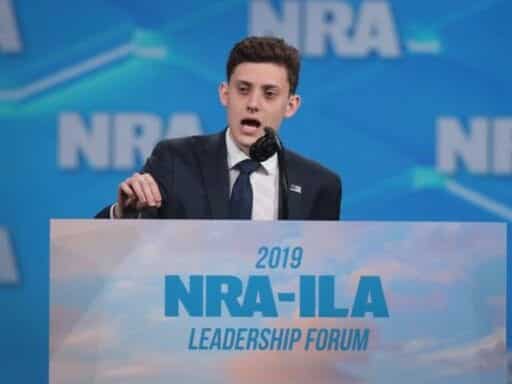 A teen conservative activist got in trouble for past racist comments. Then he lost his Harvard admission over it — and ignited a national controversy.

Typically, the status of one high school student’s application to Harvard is not national news. But when the high schooler in question is a prominent conservative activist who has met President Donald Trump, and when the outcome of his application directly touches on the raging culture war surrounding politics on college campuses, things are different — which is why Harvard’s decision to rescind admission to a young man named Kyle Kashuv got national attention Monday.

Kashuv is a recent graduate of Marjory Stoneman Douglas High School in Parkland, Florida. A survivor of the 2018 shooting at the school, he became famous for advocating against gun control after the attack. Kashuv became the high school outreach director for the conservative group Turning Point USA, and lobbied in favor of a federal “school safety” bill that attempts to address the school shooting problem without gun control. He currently has more than 300,000 followers on Twitter.

These extracurriculars, together with good grades and high SAT scores, earned Kashuv admission to Harvard earlier this year. But in late May, a series of offensive comments he made roughly two years ago — the repeated use of the n-word in private chats and Google Docs — came to light. Harvard initiated a formal review of Kashuv’s admission, and on Monday morning, Kashuv tweeted out a letter from the university formally rescinding his admission.

Kashuv’s Twitter thread, which included a blow-by-blow account of his futile efforts to restore his admission, went viral. By afternoon, his name was trending nationally on Twitter. It also set the conservative media aflame with allegations of liberal bias in academia and the dangerous power of social media mobs. Prominent right-wing pundit Ben Shapiro, for example, accused Harvard of setting up “an insane, cruel standard no one can possibly meet,” citing the incident as evidence that “our universities may be irrevocably broken.” He was far from alone in this sort of sentiment.

This isn’t just a matter of one student’s admission to a prestigious university, in other words. It’s a case that hits on some of the hottest of hot button issues — racism, political correctness, and campus free speech — and reveals why the right is far more concerned about “social media mobs” than the left is.

What Kashuv has actually said — and what he hasn’t

In the Google doc, a venue teens frequently use as an unmonitored digital chat platform, Kashuv typed a racial slur over and over again, even bragging that “im really good at typing ni**er ok like practice uhhhhhh makes perfect.” The text messages are arguably worse — he demeans a female classmate by saying she only “goes for ni**erjocks,” suggesting that she would prefer such black men sexually to a “pasty jew” (it’s not clear from the screenshots what the context for this is).

After the comments were reported by the Huffington Post in May, which claims to have acquired them from other Marjory Stoneman Douglas students, Kashuv distanced himself from the comments, arguing that the shooting changed his worldview:

A quick note on callous comments I made a few years ago in high school that are circulating. pic.twitter.com/E6Ki6XIhtc

Kashuv’s statement boils down to two points. First, the comments did not reflect any actual animus towards black people on his part; instead, he was merely “using callous and inflammatory language to be as extreme and shocking as possible.” Second, the comments happened before the Parkland shooting, which transformed the way he sees the world and made him “embarrassed by the petty, flippant kid represented in those screenshots.”

He also omitted an unequivocal apology, though he did include a more forthright one in an email to Harvard’s diversity office. “I am deeply sorry for my comments,” he wrote in that letter. “There is always more I can do to understand and learn about the struggle and pain of minority communities in America and worldwide.”

Almost immediately after the Huffington Post story, Harvard began an inquiry into Kashuv’s comments. Around the same time, a seemingly unlikely source began campaigning for Kashuv’s unadmission — a coalition of fringe right internet personalities like Laura Loomer and Mike Cernovich.

Given these sources, the campaign clearly didn’t arise out of good-faith concern over racism. Loomer, Cernovich, and others like them see Kashuv as a sellout too cozy with the Republican establishment, and saw this as an opportunity to hurt him. Loomer even started a Change.org petition to get Harvard to rescind his admission.

It’s not clear what role this campaign played, if any, in Harvard’s ultimate decision. None of the correspondence with Harvard that Kashuv published on his Twitter feed suggests that it did.

But we do know what the ultimate outcome was: William Fitzsimmons, Harvard’s Dean of Admissions, sent Kashuv a letter on June 3 saying that Harvard “takes seriously the quality of maturity and moral character,” and that “after careful consideration the [Admissions] Committee voted to rescind your admission to Harvard College.”

Kashuv tried to appeal the decision, but to no avail. So on Monday — June 17 — he went public with the news. And that’s when the firestorm began.

Why the left and right see the Kashuv situation so differently

There are two ways of looking at Kashuv’s public statements on the Harvard debacle.

A sympathetic read sees a young man who has matured in over the past two years or so. He clearly said some horrific things, but shouldn’t be judged for them today. A more critical view sees someone dodging responsibility by minimizing racist insults as “edgy” while refusing to grapple with what he actually wrote (particularly in the text message) or apologize for it except when threatened with losing something he wants.

The right has adopted the sympathetic read and the left the more critical one, for reasons deeply rooted in their ways of thinking about the world.

The conservative view of racism treats it as a personal failing, a set of explicitly held ideas and attitudes that reflect outright animus towards a group of people. You can get over your racism by repudiating it and embracing a “colorblind” view of the world, striving not to let race affect the way you speak and act.

In this view, the real threat aren’t the racist comments themselves — which can be overcome — but the impulse to punish people for them. If you penalize people for every past politically incorrect comment, the logic goes, then people will have no room to grow. You might even punish the innocent.

Liberals and leftists, meanwhile, see racism as a structural problem, reflected in both social institutions and deeply ingrained, arguably unshakable biases that can lead even people who firmly believe in ideals of equal treatment to act or speak in prejudiced ways. Addressing the consequences of racism requires work, effort, and vigilance.

When you approach the situation through that lens, Kashuv looks less like a kid who made youthful mistakes and more like a young man who’s trying to escape responsibility for his actions, and his attempt to minimize his comment by saying they were designed for shock value is part of the problem. “Ironic” racism is still real racism; the fact that the comments are roughly two years old isn’t a get-out-of-jail-free card.

But the ideological divide over Kashuv’s un-admission to Harvard isn’t only about the university’s decision. It’s also about how much, if any, sympathy Kashuv deserves, and whether his lack of admission to Harvard — a saga that will, in all likelihood, end with him attending another elite university — is truly a great injustice worthy of national attention.

“So many more people,” Slate’s Joel Anderson tweeted, “can relate to calling someone ‘ni**er” than being called “ni**er.’”

It’s hard to overstate how important it is that a university, and Harvard specifically, was at the center of all of this.

The reason this is such a big deal isn’t just that a young conservative activist said some offensive things and then faced real consequences for that speech: It’s that he was stripped of his admission to the most famous symbol of American higher education. This reflects the way in which universities have become one of the most important loci of our ongoing culture war.

The conservative view of higher education follows a maxim generally attributed to the late provocateur Andrew Breitbart: “Politics is downstream from culture.” By this, Breitbart meant that the balance of power in day-to-day politics is determined, in the long run, by the cultural ideas that shape the way people approach politics.

With liberal elites largely in charge of the country’s entertainment and universities, in the Breitbart and conservative view, that means they control the commanding heights in our society. Hollywood makes films with social justice messages, colleges teach left-wing ideas about race and religion, and even mega-brands like Gillette make ads about “toxic masculinity.” Conservatives may win elections, but they lose the youth — and thus the future of the country.

When you combine this with a (small and recently reversed) trend of conservative speakers on college campuses being shouted down and disinvited, you end up with a conservative preoccupation with what’s going on at America’s colleges: a conviction that repressive campus liberalism is a threat to the future of conservative ideas in America.

Conservatives are angry not only because one of their own has been attacked for alleged racism, but because he was denied access to Harvard — the training ground of America’s future elite. The Kashuv case, to them, demonstrates how hegemony on campus locks conservatives out of power in the long run; it’s proof, as Shapiro puts it, that “our colleges are irreparably broken; the inmates are in charge of the asylum.” (Liberals respond that the campus free-speech “crisis” is wildly overstated, and that conservatives have proposed “solutions” to it that actually pose their own threats to free expression on campus.)

But Kashuv’s case seems less like an example of liberal hegemony and more an example of the school enforcing a blanket rule about offensive social media use by prospective students. In 2017, Harvard rescinded 10 other students’ admissions after it found out they were participating in a Facebook group that involved swapping racist and anti-Semitic memes.

But the fact is that those 10 kids weren’t made into cause celebres like Kyle Kashuv. Their names weren’t trending on Twitter or defended at length in major conservative publications.

What makes the Kashuv case so volatile is the confluence of these factors: not just that he said some racist things in the past, but also that he’s a visible conservative with a national platform who’s being punished by a university.

Conservatives love to lambaste campus liberals for practicing “identity politics,” a poorly defined term that boils down to any kind of politics that takes concerns about identity-based oppression seriously. The Kyle Kashuv-Harvard saga is such a big deal because it taps into conservatives’ sense of their own victimhood — what conservative identity politics looks like in practice.

Correction: A previous version of this article included the wrong date for when 10 students’ admission offers were rescinded. It occurred in June 2017.

4 things everyone should know about the hurricane disaster in the Bahamas
Gutting fuel economy standards during a pandemic is peak Trump
Big Tech needs regulation, but DC must go to school before it goes to work
Watch: The Vox Book Club talks The Secret History’s class politics with Nicole Cliffe
Wisconsin has an election next week in the middle of a pandemic. It’s shaping up to be a debacle.
Trump officials are reportedly manipulating the CDC’s Covid-19 reports