The last debate was crucial for the New Hampshire primary results 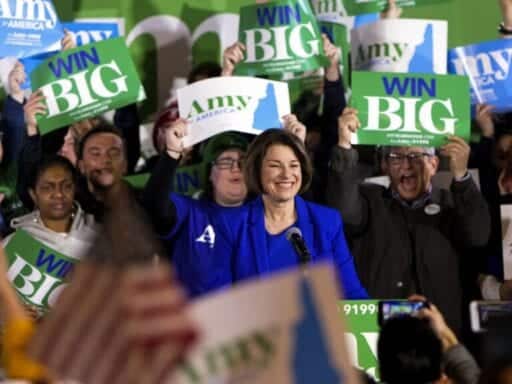 Share
Loading...
Sen. Amy Klobuchar celebrates with her supporters in Concord, New Hampshire, after a strong third-place finish in the state’s primary on February 11, 2020. | Barcroft Media via Getty Images

One big reason for that: last Friday’s debate.

But the past few days and the debate were simply better for Klobuchar and Buttigieg.

Half of #NHPrimary voters waited until the final days of the campaign to settle on a candidate, and last Friday night’s debate played a major role in helping many of them come to their decision, according to an @NBCNews exit poll. https://t.co/O69Tw3KTgv pic.twitter.com/G6w10uQJMV

These were a lot of voters. Half of New Hampshire Democratic primary voters said they waited until the last few days to decide, and 49 percent said the debate was the most important factor or among several important factors, according to NBC News’s exit poll.

Without more data, it’s hard to say why the last couple days and the debate broke for Klobuchar and Buttigieg. I personally thought that Klobuchar did well at the debate, but Buttigieg didn’t impress me. It seems voters in New Hampshire disagreed with me, at least about Buttigieg.

Another possibility is that the debate may have led some supporters or possible supporters of former Vice President Joe Biden to jump ship. Biden, after all, began Friday’s debate by declaring himself a loser in New Hampshire, saying, “I took a hit in Iowa, and I’ll probably take a hit here.”

When even the candidate is telling New Hampshire voters to give up hope, it’s unsurprising if those voters — especially more conservative and moderate voters skeptical of Sanders’s more radical message — went for the alternatives. And Buttigieg, who won the most delegates in Iowa, even if he lost the popular vote to Sanders, and Klobuchar, a standout at the debate, were there for those who’d lost confidence in Biden’s chances.

Whatever the case may be, the data is clear that the presidential candidates shouldn’t take the last few days of campaigns or the debates for granted. They really can make or break their runs for president.

Joe Biden’s impossible mission
Scott Pruitt resigns as EPA administrator
3 winners and 3 losers from the impeachment and acquittal of Donald Trump
Ethiopia’s unfolding humanitarian crisis, explained by a top aid official
Your power company can turn up your thermostat remotely — if you let it
Devin Nunes was directly involved in the push for Biden Ukraine investigations, says Lev Parnas