The latest Iowa caucuses drama, from an app meltdown to a possible recanvass, explained 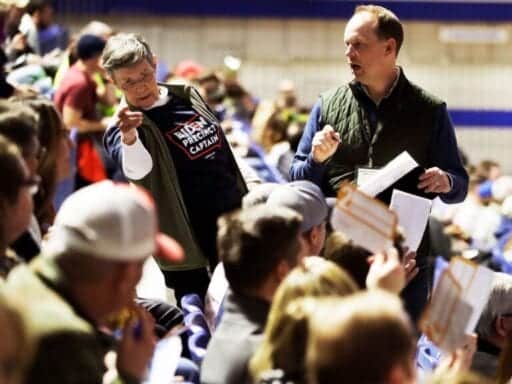 Precinct 68 Iowa caucus voters seated in the Joe Biden section hold up their first votes as they are counted at the Knapp Center on the Drake University campus in Des Moines, Iowa, on February 3. | Gene J. Puskar/AP

If you were already nervous about 2020, what’s going on in Iowa is not going to make you feel any better.

Well, the Iowa caucuses are turning out to be a real shit show.

Days after the kickoff of the 2020 Democratic primary season in earnest, Iowa continues to surprise us, and not in a good way. It’s not just that questions continue to swirl about the app at the heart of the meltdown as new information about its severe shortcomings and more revelations about the shadowy groups behind it come to the surface.

Perhaps more worrying, it’s also increasingly clear that the Iowa caucuses’ problems go far beyond technical difficulties and a product that didn’t deliver: Human error and malice are in play as well. And now, the Democratic National Committee is calling for a recanvass — meaning a hand audit of the results.

Iowa’s importance in the primary process is that it is an early shaper of the race — in many contests past, the winner of Iowa has wound up being the nominee. But with this debacle, two different candidates — Bernie Sanders and Pete Buttigieg — have now declared victory. Elizabeth Warren’s outperformance of the polling is being overlooked. Joe Biden is casting doubt on the entire process. Conspiracy theories are abound.

If you were already nervous about 2020, what’s going on in Iowa is not going to make you feel any better.

In case you’ve missed it, basically, the results of the Iowa caucuses were supposed to have landed on Monday night, but they didn’t, and they still haven’t in full. Initially, the Iowa Democratic Party said they needed some time to do “quality control” on results as they trickled in, but it soon became clear that meant more than a few spot checks.

Apparently, the new app to report results, made by a tech company called Shadow and backed by a Democratic dark money group named Acronym, wasn’t working as intended. Many precinct chairs reported problems downloading and using the apps, and while the Iowa Democratic Party had backup systems in place, including a hotline for reporting results and a paper trail, a lot of those didn’t work seamlessly, either. New rules around results reporting have exposes a multitude of errors in precinct tallies and recordings.

As the results keep trickling out of Iowa, so does more information about what happened. And the picture it paints isn’t pretty.

How screwed up were the Iowa caucuses? Well, to start, the app wasn’t great.

In the days following the Iowa caucuses, multiple disturbing reports have emerged of the chaotic scene there. There were a lot of mistakes, and at a lot of levels.

The new app the Iowa Democratic Party decided to use for the caucuses has perhaps received the most attention in the media. Sarah Morrison at Recode has a complete explainer on it, but to sum it up, the app, called the IowaReporterApp, was built by a tech company called Shadow Inc.

Prior to the caucuses, the IDP wouldn’t release the name of the app, and nobody knew much about it, but what we know now doesn’t look good. It looks like it was a rush job on which they only spent about $60,000, was barely tested ahead of time, and had major glitches come caucus day. Many precinct leaders failed to use the app or were unable to log into it. Acronym, the Democratic group that previously claimed to have launched Shadow, has tried to distance itself from the debacle, which has put its operations under scrutiny as well.

Motherboard did a deep dive on the app and spoke with six cybersecurity to get their takes on it, and the reviews were rough:

“Honestly, the biggest thing is—I don’t want to throw it under the bus—but the app was clearly done by someone following a tutorial. It’s similar to projects I do with my mentees who are learning how to code,” [Kasra Rahjerdi, an Android developer] said. “They started with a starter package and they just added things on top of it. I get deja vu from my classes because the code looks like someone Googled things like ‘how to add authentication to React Native App’ and followed the instructions,” Rahjerdi said.

ProPublica consulted a security firm about the app, and it found that while there’s no evidence it was hacked, it could have been. According to the outlet, hackers could have intercepted or changed vote totals, passwords, and other information, especially for devices connected to a Wi-Fi hotspot.

Gerardo Niemira, the CEO of Shadow, told ProPublica that the company is “committed to the security of our products,” including the app and that it underwent “multiple, rigorous tests by a third party,” even though vulnerabilities have now been found. Given the app’s issues, it certainly seems the testing could have been a bit more rigorous.

The caucus hotline also had an issue

While the app is getting a lot of airtime, it wasn’t not the only problem with the Iowa caucuses this year.

On caucus night, multiple precinct captains reported having problems with calling the Iowa Democratic Party’s hotline to report results when the app failed. Wait times were long, and the IDP hung up on one precinct canvasser when he was on live television.

Bloomberg reported on Wednesday evening that state party leaders were saying that the hotline had been clogged by President Donald Trump’s supporters on caucus night. The number had been posted online, and people started flooding the line to call and express their support for Trump — not to report results. NBC News subsequently reported that the hotline number was posted on internet forum 4chan as well as a directive to “clog the lines.” According to the outlet, one user remarked, “Uh oh how unfortunate it would be for a bunch of mischief makers to start clogging the lines.”

As if that’s not enough, there are reports of errors in the results

On Tuesday afternoon, Iowa started releasing some of its results — 62 percent of them, to be exact. And it’s slowly been putting out more, bit by bit. But yet another problem has emerged, and a big one: the results aren’t always right.

The New York Times reported that the results have been “riddled with errors and inconsistencies.” For example, one wave of results reported Bernie Sanders’s votes as being for Deval Patrick, and Elizabeth Warren’s as being for Tom Steyer. The Iowa Democratic Party pushed corrected figures relatively quickly, but it sure doesn’t inspire confidence in the “quality control” checks it’s doing.

And in multiple precincts, the numbers don’t add up. Iowa changed how it’s reporting its results election cycle so three numbers are reported (Vox’s Andrew Prokop has a complete explainer of how this all works), and basically, that new system has revealed some significant errors. As the Times notes, some candidates appeared to lose support in different rounds of voting, even though that’s not, by the rules, supposed to happen.

CNN also reported problems between different rounds of voting. And even though no new voters are allowed to join a caucus after the first count, in dozens of precincts, the final numbers of voters are higher than the first ones. In multiple precincts, there’s a discrepancy between the number of votes and the number of “state delegate equivalents” allotted.

In other words, there appear to have been a lot of human error at caucuses across Iowa.

At the moment, it looks like Sanders and Pete Buttigieg are the likeliest winners of the Iowa caucuses, with Warren in third, and Joe Biden in fourth. Buttigieg has already kind of tried to declare victory, but Sanders has been leading in the popular vote tallies, and as his state delegate equivalent numbers have crept up, he has declared victory, too. (Weird thing: the Iowa caucuses, just like the electoral college, can have a popular vote-delegate split.) But you probably shouldn’t hold your breath for this being over anytime soon.

On Thursday, Tom Perez, the head of the Democratic National Committee, called for a recanvass of the results out of Iowa. “Enough is enough,” he wrote on Twitter.

A recanvass is a review of the worksheets from each caucus site to ensure accuracy.

The IDP will continue to report results.

When asked exactly what that means, the DNC pointed to the IDP’s manual, which explains a recanvass as a “hand audit” of caucus math worksheets and reporting forms to make sure they were tallied and reported on the phone and through the app correctly.

IDP chair Troy Price on Thursday afternoon released a lengthy statement on the latest caucus developments. “While I fully acknowledge that the reporting circumstances on Monday night were unacceptable, we owe it to the thousands of Iowa Democratic volunteers and caucusgoers to remain focused on collecting and reviewing incoming result,” he said. Price said that the IDP has identified “inconsistencies in the data” and that correcting errors is an “ongoing process” with precinct chairs.

Price’s statement suggests that despite the DNC’s calls for a recanvass, the request actually has to come from a candidate, after which the IDP would have 48 hours to respond: “Should any presidential campaign in compliance with the Iowa Delegate Selection Plan request a recanvass, the IDP is prepared. In such a circumstance, the IDP will audit the paper records of report, as provided by the precinct chairs and signed by representatives of presidential campaigns. This is the official record of the Iowa Democratic caucus, and we are committed to ensuring the results accurately reflect the preference of Iowans.”

It’s not clear whether any of the campaigns will bite.