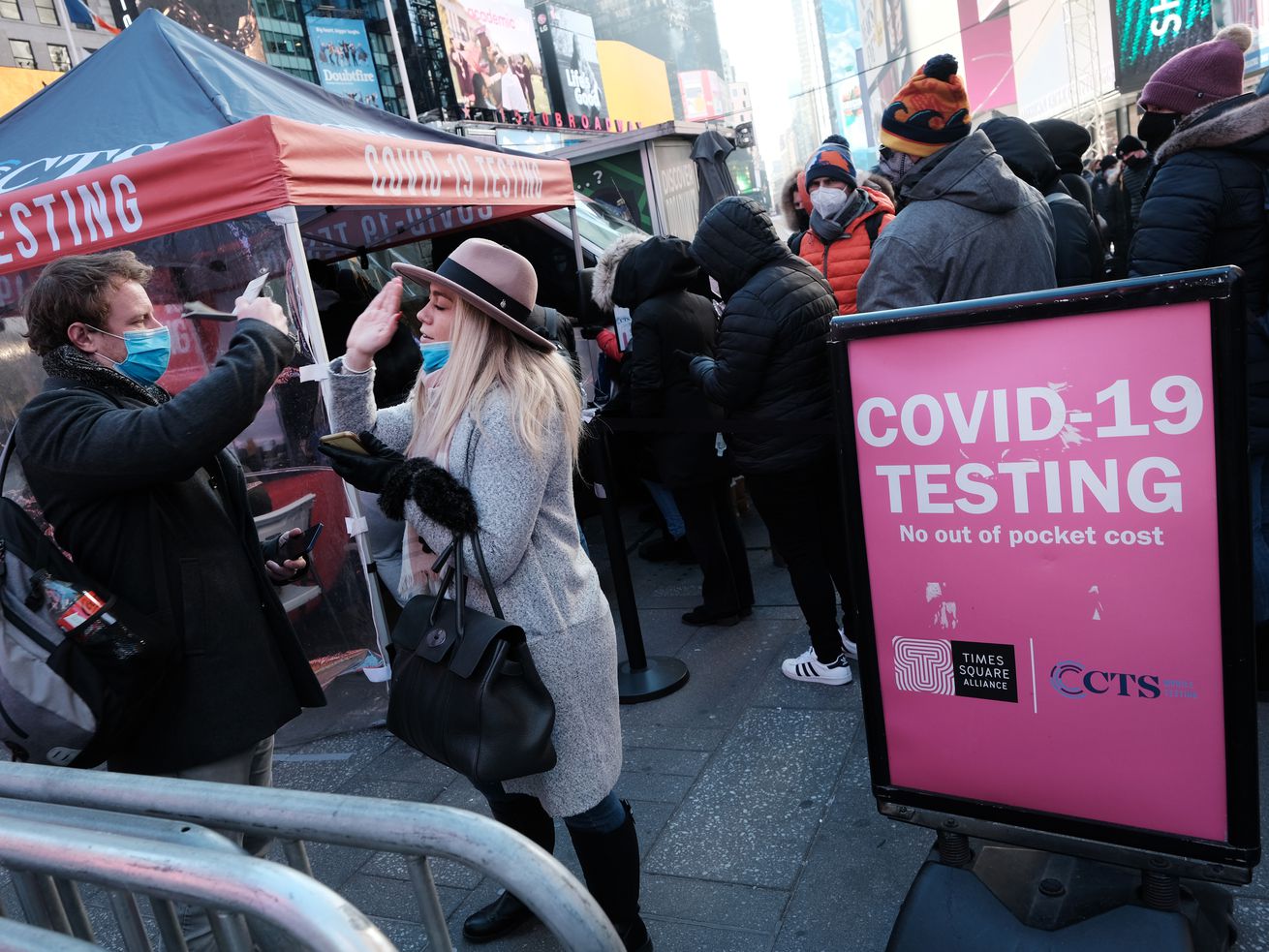 Through omicron, American workers are forced to white-knuckle it once again.

The omicron variant doesn’t spell complete disaster for the economy, but it’s not great, either. It reinforces what’s been true throughout the pandemic: What happens to the economy is contingent on what happens with the virus, and as long as the virus isn’t under control, neither is the country’s economic destiny, or the world’s.

The United States economy is in a better place than it was in the earlier days of the Covid-19 outbreak. Jobs are returning, though in a rockier fashion than some optimists hoped for, and unequally for subsets of workers. GDP growth in the fourth quarter of 2021 is expected to be strong.

It’s too early for the effects of omicron to start showing up in most economic data. Still, the variant is obviously making a difference and throwing a wrench into the recovery.

Millions of Covid-19 cases means millions of people missing work while in quarantine, and that means serious disruptions. Flights are canceled. Hospitals face staffing shortages. Businesses are shuttering and reopening. Shows and sporting events are shutting down, off and on. Schools have once again been thrown into chaos. Amid fear of the virus, a subset of the public is choosing, once again, to stay home.

The question isn’t whether omicron will have an economic impact, it’s how big it will be and how long it will last. “We’re getting a sense that there are a lot of infections, but it’s not going to, in all likelihood, overwhelm us. But how long is it going to be around? Because that is disruptive,” said Mark Zandi, chief economist at Moody’s Analytics.

The effects won’t be experienced equally. The scenario for someone who has paid leave or can work from home is quite different from someone who doesn’t have paid leave and has to work in person. Disruptions for businesses will also depend on what happens to their workers and customer bases. What’s more, the government support that undergirded many in previous times during the pandemic — expanded unemployment insurance, the extended child tax credit, small-business loans — has disappeared.

Not going out as much as you were in October? Me neither.

There are two competing public health factors: The omicron variant is spreading very fast, and the risks associated with it appear to be somewhat milder than with other variants, especially for people who are vaccinated and boosted. In terms of economic impact, these are offsetting factors; it’s not clear whether the spread of the virus or the mildness of it will weigh more heavily on people’s behavior.

Still, it’s impossible that omicron wouldn’t have some sort of effect. When I walk by a bar or restaurant in New York City right now, they are markedly less crowded than they were a few months ago (even considering the colder weather). Staff is out sick at many businesses. How many teachers and students are in and out of schools every day varies significantly. My office is once again closed.

Diane Swonk, chief economist at Grant Thornton, outlined in a recent note what she believes are two scenarios for omicron and the economy. The sunnier version says that the virus surge is short-lived and ends quickly, as it did in South Africa. And while fear of getting sick and reduced work hours slows activity, it won’t really harm consumer spending. In that version, GDP slows in the first quarter, but it’s not catastrophic. The more dire version paints, of course, a more dire picture: Omicron collides with delta, and even though there isn’t a government-mandated lockdown, there’s an effective one as so many people get sick. What exactly will happen remains an open question.

“Forecasting during the pandemic has been akin to standing in quicksand,” Swonk wrote. “Every time it seems we have a tether to pull us out, the ground beneath us shifts again in response to a new wave of infections.”

Many economists believe the impact of omicron will be significant, but the hope is that it will be quick. That’s what Wall Street appears to be betting on.

“The stock market is at a record high because investors, I think, believe that this could be the tail end of the pandemic,” said Ed Yardeni, founder and chief investment strategist at Yardeni Research. “It is just as disruptive as the delta was and the original variant, in some ways more so, because it’s spreading so rapidly. What’s different about this variant is it’s spreading like wildfire, and the hope is, like a wildfire, it burns itself out quickly.”

Many economists have cut their forecasts for economic growth in 2022 due, in part, to the omicron variant. Zandi, from Moody’s, has cut his forecast for GDP growth in the first quarter of the year to 2 percent annualized compared to 5 percent.

It’s possible that omicron could fuel inflation, with central banks in the United States and around the world expressing such concerns. If demand yet again heavily exceeds supply, it could continue to be a problem on prices. However, Zandi says he expects the impact on inflation to be modest, partly because businesses and industries have had some time to work supply chain issues out. Still, there are risks around the supply chain reaction to omicron, and they stretch far beyond the borders of the US.

“One thing that made delta so disruptive was that it really took out Asia, Southeast Asia, where a lot of the supply chains begin, and they take a different approach to responding to the pandemic,” Zandi said. “They tend to shut things down, and that is highly disruptive.”

The economic recovery in the US has been uneven. Inflation has wound up being more of a problem than many economists, policymakers, and the White House had hoped. We talk more about the supply chain than anyone ever imagined. Jobs are coming back, but it’s inconsistent — the economy added just under 200,000 jobs in December, falling short of analysts’ expectations. That was recorded before the omicron wave really took hold.

Aaron Sojourner, a labor economist at the University of Minnesota and former senior economist at the Council of Economic Advisers, said it’s unlikely businesses will lay off workers as they did early on in the pandemic. Many employers are having a very difficult time hiring right now, and they don’t want to lose people and then try to get them back again. Plus, the hope is that the variant won’t be as disruptive as variants past, especially with vaccines and better treatments available.

It appears to be the case that the unvaccinated will be the ones to cause more disruptions. Sojourner estimates that people without at least two vaccine doses are 2.4 times likelier to miss a week of work because of Covid-19. Vaccination status aside, it’s low-income workers who are missing work more than high-income workers — and who are often also less likely to have paid leave.

Every week, many Americans are missing work because they’re sick with COVID symptoms or they’re caring for someone sick.

Within vaccination status, this hits lower-income folks harder, tho they have less paid sick leave. pic.twitter.com/DXBNFSKI0l

Throughout the pandemic, there’s been a tension between public health interests and economic interests — despite the fact that there’s really no getting back to a normal economy until and unless the virus is under control. That tension has been on display, in part, with the CDC’s decision to change its guidance on quarantine periods for Covid-19. It now says people who test positive for the virus but don’t have symptoms need to isolate for just five days and wear a good mask for five more. Previously, it recommended 10 days of isolation.

The decision has come amid pressure from the business community, such as the CEO of Delta, which has pushed a change in guidelines in order to ease worker shortages and get sidelined employees back faster. Some critics have panned the CDC’s move as one that prioritizes corporate profits over public health. That may be true, but there’s also a tricky line for workers to walk — especially those without paid leave. For many people, missing 10 days of pay is an untenable proposition. If the US had paid leave for all workers, the scenario would be different — and brighter.

“If people are contagious and infectious, they pay the cost of isolating. But everyone else gets the benefit, and that’s not fair, it’s not efficient,” Sojourner said. “It leads to bad decisions from a social perspective. That’s true for workers, and that’s true for firms.”

There are ways to deal with the fallout, but the tools could be better

The good news about omicron and the economy is that we have much better tools to deal with the situation than we have had at other moments in the pandemic.

“There’s a bunch of low-cost, win-win strategies that can be used to protect health and promote livelihoods and keep the economy going, but they’re nothing new,” Sojourner said, citing vaccinations, boosters, and masks, among other measures. “They require work and resources to pull off, but to the extent you can pull them off, you improve health and the economy.”

If people do lose jobs or are laid off, they still get unemployment insurance. Extra cash that went out from the federal government during the pandemic is still helping as well. However, that money will start to run out, and more pandemic-related help from Washington, DC, is not on the way.

A senior White House official told CNN that beyond maybe “something small” for restaurants, economic supports such as expanded unemployment insurance just aren’t on the table because the economy is strong. That may be true, but the burden is not shared equally — people who can’t work from home are being pushed out to put themselves at a health risk to keep their households afloat and the economy running. And if they do get sick and have to miss work, that comes at an economic cost to them and to businesses as well.

“Fundamentally, we’re still in a world where people think the economy is made up of profits and corporate interests, and as long as we think about our economy in that way, we’re never going to get to a point where we’re actually providing the public health resources [along with] the big investments and labor market supports that actually help people thrive. And until we do that, we’re never going to get out of this situation in a healthy way,” said Rakeen Mabud, chief economist and managing director of policy and research at the Groundwork Collaborative, a progressive think tank. “We’re really seeing how public health decisions that prioritize profits over people are stacking the deck against people and their families.”

For the time being, the country seems to be hoping omicron is a temporary danger for people’s health and the economy. We’re basically white-knuckling through it.

Why Boeing’s successful Starliner test is a big deal