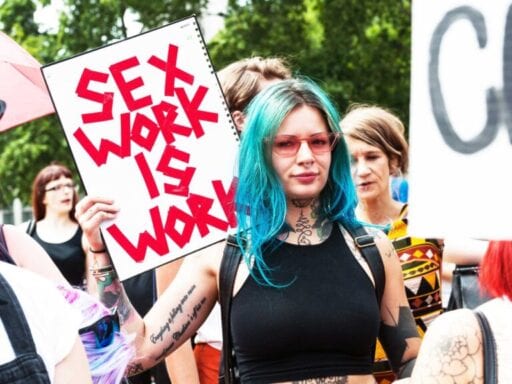 FOSTA-SESTA contributes to violence against trans women of color, advocates say. Most campaigns are silent on it.

The law was supposed to fight sex trafficking. Instead, many say it’s forced people — especially transgender women of color — out of their homes and into poverty. It’s even put lives at risk.

FOSTA-SESTA — a combination of two bills, the Allow States and Victims to Fight Online Sex Trafficking Act and the Stop Enabling Sex Traffickers Act — makes it easier for law enforcement to go after websites that post ads related to sex trafficking. But because the law encompasses consensual sex work too, sex workers and their advocates say it made many of them unable to find clients online, forcing them into poverty and more dangerous forms of work.

Trans sex workers of color are already at disproportionate risk of both poverty and violence, and FOSTA-SESTA has only made the situation worse, Spellman said. “When this law came into effect, it literally took away a lot of people’s livelihood.”

For perhaps the first time, the epidemic of violence against trans women of color has become an election issue, with Sens. Elizabeth Warren, Cory Booker, and others pledging to address it from the debate stage or as part of their LGBTQ rights platforms. Some candidates have even said they’re open to decriminalizing sex work, something advocates say is necessary to stop the harassment, assault, and other abuse that trans women of color disproportionately face.

But so far, almost nobody in the race is talking about FOSTA-SESTA — legislation that Warren, Booker, and many other candidates voted for as members of Congress. When Vox surveyed all the presidential candidates on the issue, only two — South Bend, Indiana, Mayor Pete Buttigieg and former Rep. Joe Sestak — were willing to comment. And advocates say if candidates really want to curb violence against trans people, they have to be willing to revisit a law that’s putting a lot of trans sex workers at risk.

FOSTA-SESTA pushed sex workers onto the streets, where they face more violence

The FOSTA bill in the House and the SESTA bill in the Senate were meant to fight sex trafficking online, as Vox’s Aja Romano explains. The laws made it possible for companies operating websites to be held legally responsible if people posted ads for sex work, including consensual sex work.

They passed the House in February 2018 and the Senate that March, with overwhelming bipartisan support. Every 2020 presidential candidate then in Congress — Sens. Warren, Sanders, Harris, Booker, Klobuchar, and Bennet, as well as Reps. Beto O’Rourke and Tulsi Gabbard — voted for them. In April, the president signed them into law.

The response was swift. Two days after the law passed, Romano reports, Craigslist shut down its personals section, which had been used by some sex workers for advertising. The escort service Cityvibe shut down. Reddit closed down several subreddits devoted to sex work.

And the impact on sex workers, many say, was devastating. Before the law went into effect, Spellman explained, sex workers were able to find clients online as well as using message boards to compare notes about which clients were safe to work with. Now “it’s a lot harder to screen our clients,” she said.

And because it’s more difficult to find clients online, more sex workers are on the street, where the work is far more dangerous.

“When I started doing online sex work, all of the ills that I had faced in the streets immediately came to an end, because I screened that thoroughly,” Spellman said.

Indeed, a 2019 study found that the ability of sex workers to advertise on Craigslist actually reduced the total homicide rate for women in America by 10 to 17 percent, because sex workers were so much less likely to be killed.

After FOSTA-SESTA went into effect, that safety net was gone. After the law was passed and many sites shut down ads for sex workers, Caty Simon reported at the website Tits and Sass that “the sex worker community online started to hear about workers going back out on the street and missing their check-in calls — as of April 14th, just based on anecdotal data passed between us, 13 workers have gone missing and two have been confirmed dead.”

Some of the most affected by FOSTA-SESTA have been trans sex workers of color, who, as Katelyn Burns has written at Vox, “face a disproportionately high risk of violence, up to and including murder.” Of the 41 sex workers murdered in the US in 2015, 17 were black and 12 were trans women, according to Amnesty International.

Black trans people in general are disproportionately likely to face employment discrimination, and with no federal law banning discrimination on the basis of gender identity, they often have little recourse. For some, the best or only option is sex work.

And now, Spellman and others say that option is a lot more dangerous than it used to be.

Overall, transgender people of color are at high risk of violence in America. At least 18 trans people were killed between the beginning of January and the end of September 2019, according to the New York Times, most of them trans women of color. Dana Martin, 31, Muhlaysia Booker, 23, and Bee Love Slater, also just 23, are just some of the trans people who have lost their lives this year.

Of course, not every trans person who is killed is involved in sex work. But laws around sex work are a big factor making trans people unsafe, advocates say. FOSTA-SESTA, in particular, is “definitely” contributing to the larger problem of violence against trans women of color, Spellman said. “When there are more sex workers out on the streets, the violence is going to rise.”

So far, almost none of the 2020 Democrats are talking about the issue

Because of this increase in violence, sex workers’ rights groups and LGBTQ rights advocates have called for the legislation to be repealed or at least revisited. The National Center for Transgender Equality Action Fund is asking for, at a minimum, additional oversight of the legislation’s impact, Gillian Branstetter, the group’s media relations manager, told Vox last month.

Despite this, few presidential candidates have been willing to address FOSTA-SESTA. When Vox surveyed all the candidates on their position on the legislation and whether they would support oversight of its impact, only two campaigns got back to us to comment.

Buttigieg’s campaign pointed us to comments the candidate made during a press gaggle after the October 10 town hall on LGBTQ rights in Los Angeles. Asked if he was open to decriminalizing sex work, Buttigieg said, “we need to revisit the current legal framework.”

“You look at something like FOSTA-SESTA,” he went on, “laws that were certainly intended, and set up with the best of intention about dealing with sex trafficking, but may have actually endangered some people unintentionally. So, we need to revisit that.”

Joe Sestak, a former Pennsylvania representative who was no longer in Congress when FOSTA-SESTA was passed, said in a statement that he believes the legislation “was written with the very best of intentions,” but that “instead of making it easier for law enforcement to target sex traffickers, this law has actually made it harder, by shutting down commonly used online platforms used by sex traffickers and sending them further underground or onto the ‘dark web.’”

“We need to take a very close look at what exactly FOSTA-SESTA has accomplished, if anything, and make a determination about whether it needs to be repealed or merely modified,” he said.

Other candidates, including Sens. Booker, Harris, Sanders, and Warren, and Rep. Tulsi Gabbard, who have all said they are open to decriminalizing sex work but who voted for FOSTA-SESTA, did not comment on their current position on the legislation.

In general, candidates are “very scared of that law,” fearing that if they come out against it, they’ll look soft on trafficking, Spellman said. Coming out against it at this point would, for many candidates, mean admitting they voted the wrong way. It’s perhaps no coincidence that the only two candidates willing to go on record about the legislation were not in a position to vote on it.

But sex workers and their advocates say that if candidates really want to address violence against trans women of color, as they say they do, they can’t ignore FOSTA-SESTA.

“In the Democratic Party, we should be judging our candidates not by how proudly they campaign as a hero on trafficking, but by how their actions actually impact people,” Liara Roux, a sex worker and sex workers’ rights organizer, wrote at Vice in February.

And for Spellman, candidates who want to fight trafficking should be backing policies, like a universal basic income, that help people meet their needs so they aren’t vulnerable to trafficking. “What they need to be doing is putting safety nets in place,” she said.

Without such safety nets, and without action on FOSTA-SESTA, advocates say trans sex workers in America will remain vulnerable to violence — and legislation backed by Democrats, including frontrunners in the 2020 race, will be part of the cause.