The life and death consequences of naming the coronavirus 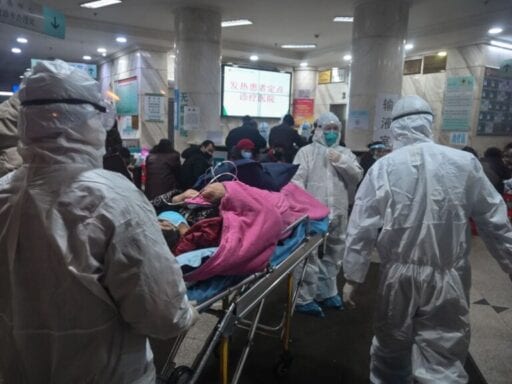 Share
Loading...
Medical staff in Wuhan, China, arrive at a hospital with a patient on January 25, 2020. It took weeks for public health officials to come up with the name Covid-19 for the new coronavirus disease. | Hector Retamal/AFP via Getty Images

A bad name for an illness can be dangerous. That’s why it took so long to settle on Covid-19.

The new disease caused by the coronavirus outbreak that began in Wuhan, China, in December now has an official name: Covid-19.

It may not be elegant, but its roots are pretty straightforward: COronaVIrus Disease 2019. “Coronavirus” refers to the family of viruses that the disease belongs to, and is named for its crown-like shapes under a microscope (“corona” comes from the latin word for “crown” and the Ancient Greek korōnè, meaning garland, or wreath). “2019” refers to the year it was first identified.

The fact that it took weeks for global health officials to settle on what to call an illness that has already infected more than 64,000 people and killed more than 1,300 shows just how fraught the naming process can be.

“We had to find a name that did not refer to a geographical location, an animal, an individual or group of people, and which is also pronounceable and related to the disease,” said Tedros Adhanom Ghebreyesus, the director-general of the WHO during a press conference this week.

The virus that causes the disease was also given a new, even clunkier name: SARS-CoV-2. It’s a change from the interim name, 2019-nCoV, and reflects the heritage of the virus, researchers say.

According to the Coronavirus Study Group of the International Committee on Taxonomy of Viruses, the pathogen is “a sister to severe acute respiratory syndrome coronaviruses,” hence the “SARS” in the name.

“The virus is named according to its phylogenetic links with other viruses,” said Michael Ryan, executive director of the WHO’s emergencies program, during a press call on February 13. “It’s a technical name I suppose people in labs are very comfortable with.”

But the WHO is already pushing back on using the name SARS-CoV-2 for the virus.

“From a risk communications perspective, using the name SARS can have unintended consequences in terms of creating unnecessary fear for some populations, especially in Asia which was worst affected by the SARS outbreak in 2003,” a WHO spokesperson told Science. “For that reason and others, in public communications WHO will refer to ‘the virus responsible for COVID-19’ or ‘the COVID-19 virus,’ but neither of these designations is intended as replacements for the official name of the virus.”

As Adam Rogers reported in Wired, the new name for the disease is already having some unintended consequences. Norm Carson, the president of AV equipment company Covid, Inc., told Wired his company was bombarded with calls this week:

“We make high-end wall plates and cables for the commercial market, and we’ve worked really hard to build our brand and build good products,” Carson says. “So any time you’re associated with a worldwide pandemic, I think it’s something to be concerned about.”

As it turns out, a poorly named disease can have far more devastating consequences than a clogged phone line. And as new infections arise, the need for better names will grow. Here’s what you need to consider.

A bad name for an illness can be dangerous and deadly

It’s critical to have clear, distinct names for different types of diseases because they can take many forms and the bacteria, fungi, and viruses behind them can mutate rapidly. Those mutations, in turn, can affect how the disease spreads, the damage it causes, and the tactics we can use to fight back. Unique names can help scientists, health officials, and the public keep track of all of these factors.

Public health officials also have to consider how the population at large responds to infections. In particular, they want to avoid spreading panic, and names are a factor in how that plays out.

In light of this, the WHO published a set of guidelines for naming illnesses in 2015. “This may seem like a trivial issue to some, but disease names really do matter to the people who are directly affected,” said Keiji Fukuda, who was serving as assistant director-general for health security at the WHO at the time, in a statement presenting the guidelines. “We’ve seen certain disease names provoke a backlash against members of particular religious or ethnic communities, create unjustified barriers to travel, commerce and trade, and trigger needless slaughtering of food animals. This can have serious consequences for people’s lives and livelihoods.”

A case in point is the virus known as HIV, and the illness it causes: AIDS. In 1981, the early days of the disease’s spread in the United States, AIDS was sometimes referred to as “gay cancer” since it was diagnosed in a cluster of gay men. Researchers later called the disease GRID for “gay-related immunodeficiency” or AID for “acquired immunodeficiency disease.” The term AIDS first appeared in the New York Times in August 1982.

But the initial name for the disease created a stigma among the gay community and served to isolate an already marginalized group. The name certainly wasn’t the only factor, but it created an environment that hampered people’s willingness to disclose infections and to seek treatment.

At the same time, identifying the disease so closely with one group underrated the risks to the rest of the population, as Rutgers University researcher Carol Goldin wrote in the journal Social Science & Medicine in 1994:

One consequence of such identification is that it allows the rest of society to simultaneously assign blame, and through contrast, define their own innocence. The contrast of innocence/guilt poses a serious health threat because it allows individuals to disassociate themselves from risk groups. Persons with AIDS who are not members of risk groups may be described as ‘innocent victims’. These include hemophiliacs, children of HIV-infected mothers, and unsuspecting wives whose husbands are bisexual or promiscuous. If these persons are to be pitied, by implication, members of risk groups who ‘infected’ them must be culpable.

The net result was that the disease continued to spread and the government dragged its feet in mounting a response. Ultimately, the disease killed thousands around the world and remains a health risk to this day.

“I think stigma is really the kind of a key danger that is associated with naming,” said Rebecca Seligman, an associate professor of anthropology and global health at Northwestern University.

Similarly, diseases named after places — the Ebola River, Lyme, Connecticut, the Zika Forest — can unfairly associate a place or people from that region with an illness.

Disease names can also mislead. In 2009, a global outbreak of a strain of influenza came to be called swine flu. It led to the widespread culling of pigs around the world to prevent infection. Notably, the Egyptian government at the time ordered the slaughter of all the pigs in the country.

But there was no evidence that the specific virus behind the outbreak infected pigs or that pigs harbored the virus. The virus got that name because scientists said it resembled influenza viruses that commonly infect swine. Health officials later adopted the much-less-controversial technical name for the virus behind the disease, H1N1, which refers to the types of proteins found on the surface of the virus.

How should you name a disease?

As the struggle to come up with Covid-19 shows, naming requires a lot of thought and careful consideration. And prior to the WHO guidelines, researchers came up with some odd solutions.

In 1993, an outbreak of a new version of the hantavirus — named for the Hantan River in South Korea — emerged in the four corners region of the southwestern US. The Centers for Disease Control and Prevention and the US Army Medical Research Institute of Infectious Diseases recommended naming the new pathogen the Muerto Canyon virus after the region in the Navajo Nation territory where it was found.

“The Navajo people reacted strongly against any further association with the disease that had led to so much initial prejudice, and tribal elders appealed to officials to reconsider,” pulmonologist Charles J. Van Hook wrote in the journal Emerging Infectious Diseases.

That’s certainly one way around the bigger pitfalls of naming a disease, but it doesn’t tell you much about the illness itself.

The WHO guidelines say the name of a new disease should use “generic descriptive terms,” highlighting the kind of pathogen behind it, the symptoms it causes, the people it affects, and its severity. But the guidelines also say that a name should avoid “terms that incite undue fear” like “fatal” or “epidemic.”

It’s also important to come up with a name early in the process of studying a new illness. “Once disease names are established in common usage through the Internet and social media, they are difficult to change, even if an inappropriate name is being used,” according to the WHO guidelines. “Therefore, it is important that whoever first reports on a newly identified human disease uses an appropriate name that is scientifically sound and socially acceptable.”

So it makes sense that international health officials now want to use a term like Covid-19 for the disease caused by the new SARS-CoV-2 virus.

“You can think about the name of the coronavirus as being the result of a learning curve over time,” Seligman says.

But does a watered-down, jargony name like Covid-19 mean people won’t take the disease seriously?

“There’s so much other information being said about Covid-19, and a lot of it is very scary and inflammatory,” said Seligman. “I think people are going to take it seriously even when it has a name like that and I think having a name that’s really neutral can actually help temper some of the overreacting that people might be doing.”

Now, the official name of the disease doesn’t mean that it will be the name that people will use, but it sends a strong signal. And by eliminating potential problems associated with its name, health workers can concentrate on fighting the disease itself.

Julia Belluz contributed to this story.

Photos: Uprisings across America over George Floyd’s death
The pandemic should permanently change how we tip
Democrats finally have a chance to pass stronger pandemic-related privacy laws
E-girls and e-boys, explained
New data says the unemployment rate surged to 4.4 percent in March — but the truth is worse
The Supreme Court normally hands down its biggest cases in June. Here’s what to expect this month.