The limits of free speech for white supremacists marching at Unite the Right 2, explained 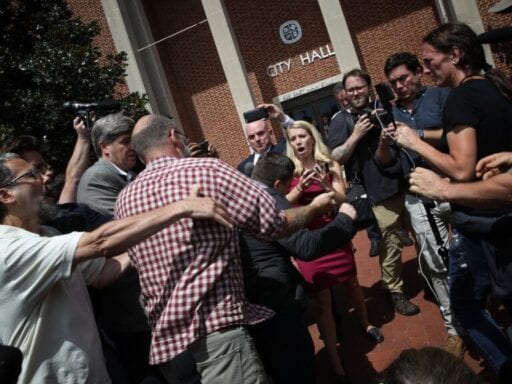 You may have heard that white supremacists are marching through the nation’s capital this weekend. Their rally, Unite the Right 2, is sort of a sequel to the violent neo-Nazi march they held a year ago in Charlottesville, Virginia, that ended with the death of a counterprotester and multiple people sent to the hospital.

Sunday’s festivities, organized by Jason Kessler, will culminate outside the White House in a rally for “white civil rights.” Despite the public backlash to last year’s event, white nationalists still feel emboldened by President Trump’s administration to take their racist views from the dark corners of the internet into the mainstream. And any time they face criticism or opposition, members of the alt-right assert their free speech rights.

Even the mayor of the District of Columbia, who is overseeing the police and emergency response for the rally, merely referred to the event in an official memo as a series of “First Amendment activities.”

There is no question that all Americans, including white supremacists, have a constitutional right to publicly express racist, offensive, unpopular views under the First Amendment. That right has been repeatedly upheld by the US Supreme Court. But what’s often left out of the current defense of racist speech is that the First Amendment does not protect people from saying just any vile, racist thing that comes to mind.

The First Amendment would not, for example, protect any rallygoers this weekend who hurl threatening racial slurs to specific people during their march, as many of them did in Charlottesville. These could be considered “fighting words,” a category of speech that the Supreme Court has said has no value to American democracy. In 1942, the Court defined fighting words as “those which by their very utterance inflict injury or tend to incite an immediate breach of the peace.”

Considering the violence that broke out in Charlottesville last year, and the anxiety about potential clashes in the nation’s capital this weekend, it’s important to analyze the role that language may play in sparking the violence, and whether it’s protected by the First Amendment.

The “fighting words” doctrine represents a gray area of constitutional law, but several legal experts I talked to last year said that many white supremacists in Charlottesville crossed that line when they began chanting racial and homophobic slurs to specific people on the streets.

Generic racist chants are protected, but not slurs aimed at specific people

The images of white men draped in swastikas and carrying lit torches in Charlottesville last year were disturbing, as were many of their chants, like “Jews will not replace us.”

While these chants don’t rise to the level of fighting words, free speech experts believe right-wing demonstrators may have gone too far when they called specific people the n-word or a gay slur. These could be interpreted as fighting words because they are profanities directed at certain individuals that would lead a reasonable person to retaliate.

However, some legal experts think it would be hard to prove whom the slurs were aimed at, since the demonstrators were part of a political rally.

”The most extreme of [Unite the Right’s] outrageous utterances in Charlottesville would be easy to deem unprotected,” said Robert O’Neill, a well-known First Amendment scholar and former director of the Thomas Jefferson Center for the Protection of Free Expression at the University of Virginia (the campus where demonstrators rallied last year).

When demonstrators went too far

Last year, media outlets reported a few repeated chants heard during the Unite the Right rally, including, “One people, one nation, end immigration,” “Jews will not replace us,” “White lives matter,” and “Blood and soil.”

These white supremacist slogans clearly offended many counterprotesters, but the courts have generally interpreted such broad statements as protected forms of speech.

A few hours later, Washington Post reporter Joe Heim said he heard demonstrators chanting, “Go the fuck back to Africa,” and shouting the n-word at a black woman across the street.

”You could make the case that it was an insulting epithet, obviously a slur and racist comment that would provoke someone to retaliate,” said Caroline Mala Corbin, a constitutional law professor at the University of Miami.

When “fighting words” became exempt from protection under the Chaplinsky v. New Hampshire Supreme Court ruling, it was based on the idea that such language did nothing to further public discourse and instead inflicted harm on people. Based on that, Corbin says the use of the gay slur and the n-word at demonstration would clearly fit this category of unprotected speech.

But over the years, Supreme Court justices have shown an aversion to the “fighting words” doctrine, out of concern that it might be used to suppress protected political speech. So they’ve drastically narrowed their interpretation of fighting words to insults directed on the personal level.

In the landmark 1971 case Cohen v. California, the Court overturned the conviction of an antiwar protester who was charged with disturbing the peace in a public courthouse for wearing a jacket that said “Fuck the draft.”

In a 5-4 decision, the justices said the law, which banned offensive language in public, was too broad and trampled the protester’s First Amendment rights. In their opinion, they ruled out the argument that the phrase on his jacket involved fighting words, because “no individual actually or likely to be present could reasonably have regarded the words on appellant’s jacket as a direct personal insult.”

The case essentially created three hurdles for someone to prove that certain speech is constitutionally unprotected under the “fighting words” doctrine: First, they would have to show that the language is, in fact, an insulting epithet. Second, that it’s uttered directly to an individual. Third, that it’s likely to provoke someone to retaliate and breach the peace.

The fighting words doctrine was later tested by the justices in the 1992 case RAV v. City of St. Paul, in which a Minnesota teen was convicted under a hate crime ordinance for burning a cross on the front lawn of a black family. The Supreme Court agreed that such an action met all three hurdles and constituted fighting words, but they overturned his conviction anyway. They said the ordinance was unlawful because it restricted speech based on the content of the words, instead of the context in which they were expressed. (The law banned offensive speech related to someone’s race, gender and religion.)

In the context of the Charlottesville demonstration, most experts I spoke to agreed that slurs such as the n-word and “faggot” would probably clear the first two hurdles: They are serious personal insults and they were directed at a specific person or group of people. What is unclear is whether their words were likely to spark imminent violence.

Considering that the black woman was across the street from demonstrators, and that counterprotesters were separated by barricades, lawyers could argue that it’s unlikely their words would trigger immediate violence.

David Hudson, a First Amendment expert and law professor at Vanderbilt University, said the context of a political rally adds another layer of complexity. “Most fighting-words cases involve one-on-one, face-to-face insults,” Hudson wrote in an email. Demonstrators might say that their slurs weren’t directed at anyone in particular.

What the lower courts think

While the Supreme Court tends to side with free speech arguments in such cases, lower courts have upheld many rulings that certain language is unprotected under the First Amendment. And some of those rulings involved similar racist slurs.

Here are some examples Hudson points to when state courts have found certain language not protected under the fighting words doctrine:

In 1999, a Minnesota appeals court found that a black man who called a police officer a white racist “motherfucker” and wished his mother would die was not protected by the First Amendment.

In 2001, a Minnesota appeals court upheld a ruling in State v. Hubbard that a man who repeatedly flashed lewd hand signals to a young female driver was not expressing protected speech. That same year, an appeals court in Arizona found that it was not free speech when a white man called two black women the n-word and threw an empty can of Mountain Dew at them on the street.

In 2003, a Wisconsin appeals court ruled that calling a nude woman on the beach a “whore,” “harlot,” and “Jezebel” were fighting words.

In 2010, a North Dakota court upheld a ruling against a white teen who called a black girl the n-word at a teen dance and then again at a restaurant. The defendant’s attorney argued that saying the n-word is not a crime. The court said that while the First Amendment does protect the use of the slur, “an objectively reasonable person would find the totality of [the defendant’s] statements constituted explicit and implicit threats that were likely to incite a breach of the peace or violent reaction and alarm the listener.”

Kessler and other Unite the Right organizers are now embroiled in their own legal battle. Victims who were injured in the first rally are suing them for conspiracy to commit violence against Jews and people of color. The organizers tried to use the free speech defense, but a federal judge rejected it.

“The First Amendment does not protect violence,” Judge Norman Moon wrote in his July ruling, allowing the lawsuit to proceed.

That’s probably why Kessler has been so worried about discussing the chance of violence breaking out again at the rally this weekend, telling participants that such talk doesn’t help with his legal situation. It might also help to remind his fellow “white rights” activists that they don’t have a right to spew every hateful thought that comes to mind when marching through the nation’s capital.

Elizabeth Warren has a plan for this, too
One Good Thing: The gentle, lovely beauty of the YouTube Christmas coffee shop
The Dow Jones is now lower than it was when Trump took office
The GM strike has officially ended. Here’s what workers won and lost.
What Pelosi’s defenders miss
Vox’s live results for the 2020 presidential election