The litmus test for a Supreme Court nominee 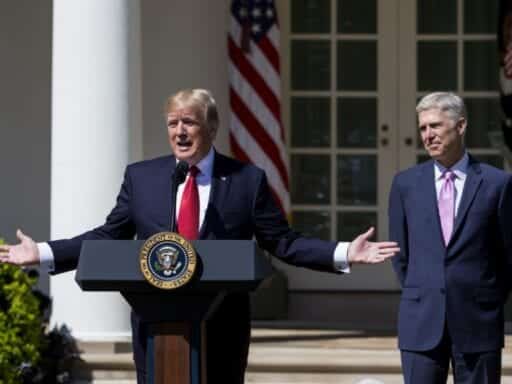 The resignation of Anthony Kennedy gives Donald Trump the opportunity to select his second Supreme Court justice. Who will he pick?

Until fairly recently, presidents often made idiosyncratic choices with respect to judicial ideology when selecting future justices. President Dwight D. Eisenhower, for example, chose William Brennan because he wanted both a Democrat and a Catholic to maintain partisan and geographic balance on the Court; Brennan famously went on to become a liberal stalwart on the Court. But, as Supreme Court nominations have taken more prominence in American politics, such ideological “mistakes” have all but disappeared.

One way that parties and presidents can signal their intentions on future nominees is the use of policy litmus tests — that is, a promise to appoint justices who will decide cases on a given policy in the direction favored by the party. As part of our ongoing research on the politics of Supreme Court nominations, we recently read and coded every party platform and presidential acceptance speech since 1928. Here is what we found.

Only a Republican president will appoint judges who respect the rule of law expressed within the Constitution and Declaration of Independence, including the inalienable right to life and the laws of nature and nature’s God, as did the late Justice Antonin Scalia. … Only such appointments will enable courts to begin to reverse the long line of activist decisions — including Roe, Obergefell, and the Obamacare cases. … The confirmation to the Court of additional anti-gun justices would eviscerate the Second Amendment’s fundamental protections. … We support the appointment of judges who respect traditional family values and the sanctity of innocent human life.

The replacement for our beloved Justice Scalia will be a person of similar views and judicial philosophies. Very important. This will be one of the most important issues decided by this election. My opponent wants to essentially abolish the 2nd amendment. I, on the other hand, received the early and strong endorsement of the National Rifle Association and will protect the right of all Americans to keep their families safe.

Second, policy litmus tests are a relatively recent phenomenon. Before 1968, policy litmus tests were unknown, and may have been seen as outside the bounds of normal American politics. In 1968, however, Nixon broke the norm by pledging that he would appoint only “law and order” judges.

But the dam really burst in 1980. In that year’s platform, and in every subsequent platform, the Republican Party imposed an abortion litmus test (in the anti-abortion direction) on judicial appointments to the Supreme Court. In a few platforms, the policy demands also embraced “law and order” (1988, 1996).

Then, in 2012, the Republican Party agenda added opposition to the Affordable Care Act as a policy requirement for nominees, and in 2016 support for gun ownership. This figure shows that the timing and types of litmus tests from 1928 to 2016. It makes clear that Republicans (coded in red) have employed litmus tests earlier and more often than Democrats (coded in blue).

Third, there is a big difference between Republican and Democratic litmus tests for Supreme Court nominees. As shown in the figure, Democratic Party platforms and acceptance speeches rarely impose specific policy litmus tests outside abortion, and even there are somewhat inconsistent. More frequent are calls for diversity and respect for minority rights.

Thus, Republicans appear to be playing “constitutional hardball.” While Democrats have focused less on policy litmus tests, we found they have been more likely to emphasize the need for racial and gender diversity on the Supreme Court; this divergence is consistent with the broader asymmetry in ideological commitments across the two parties.

Why do policy litmus tests matter? Presidents have a strong incentive to deliver on them. The sudden appearance and proliferation of litmus tests in the party platforms reflects the prominence of interest groups and issue enthusiasts in the parties after the nominating reforms of the 1970s. (This proliferation, as we have shown, is coincident with a rise in the number of interest group active in Supreme Court confirmation politics).

As scholars of parties have pointed out, presidents cannot run competitive primary contests without the enthusiasm, shoe leather, and money offered by organized interests and issue enthusiasts. At the present juncture, a surefire way to alienate the groups a Republican nominee needs would be to ignore their heartfelt demands for Supreme Court nominees.

In light of the historical patterns, what can we predict about Trump’s forthcoming nominee? While there will be sententious statements about open minds and justices being umpires, The nominee will likely be anti-abortion, pro-law and order, pro-gun rights, anti-Affordable Care Act, anti-gay marriage, and generally conservative. This is what key coalitions in the Republic Party demand, and it is what President Trump (with some help from the Federalist Society) will likely deliver.

The breathtaking unconstitutionality of Trump’s new census policy
A new study shows malaria’s often neglected toll on a vulnerable population: Pregnant women
In Judy, Renée Zellweger shines as Judy Garland. But the movie trades real tragedy for a Hollywood e...
A radio ad invoked lynchings to court black voters. It did not go over well.
A TV show that proves being good doesn’t mean you can’t be funny
Ruth Bader Ginsburg probably just dealt a fatal blow to the Equal Rights Amendment