The Little Stranger is a quietly brilliant tale of pain, grief, and possibly ghosts 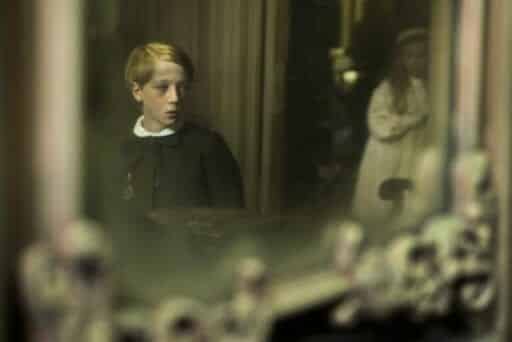 Notice: Undefined offset: 0 in /var/www/wp-content/plugins/seo-optimized-images/seo-optimized-images.php on line 131
Share
Loading...
From the moment in The Little Stranger that Dr. Faraday (Domhnall Gleeson) pulls up to Hundreds Hall, a big English manor home that has clearly seen better times, it’s clear that something not entirely normal is going on.

Viewers with a working knowledge of the role that big old family houses play in British literature — particularly in stories set in the 20th century, when old aristocracies and hierarchical norms were taking a beating following the devastations of World War II — will feel the tingle: Hundreds Hall is literally a house, sure, but in this story it’s going to be a lot more. Ghosts both real and metaphorical haunt narratives like these, lurking around corners and making people remember formerly glorious days. At times, they inspire people to act in ways that aren’t entirely rational.

And that’s the idea behind The Little Stranger, based on Sarah Waters’s 2009 gothic novel and adapted by Lucinda Coxon (The Danish Girl). It’s a slow-burn horror film, one that has all the sudden scares and moments of pristine fear present in any good movie of its ilk. But in the hands of Lenny Abrahamson (Room), The Little Stranger is elevated by measured pacing that also makes the larger house-based metaphor clear — and the result is both elegiac and frightening.

The Little Stranger is about a once-great house grown shabby, and the family — and its ghosts — that lives within

Faraday, a country physician, has been called to Hundreds Hall to look after the health of Betty (Liv Hill), the teen housemaid. Betty complains of pain and seems frightened, but the family doesn’t mistreat her, and her symptoms clear up fast.

The family of the house is the Ayres, or what’s left of them: Mrs. Ayres (Charlotte Rampling) and her two adult children. Roderick (Will Poulter) was in the Royal Air Force during the war, where he sustained serious injuries, both to his body — which is burned and crippled on one side — and to his mind, tormented by the trauma. And Caroline (the terrific Ruth Wilson) lives at home caring for him and her mother; she, too seems injured in some way, a little hunched and not quite accustomed to having others around.

Dr. Faraday — true, perhaps, to his namesake, the pioneering British scientist who helped discover electromagnetism — suggests treating Roderick’s leg muscles with an innovative new electroshock treatment, which will require him to make several return visits to the house.

That allows Caroline and him to strike up an acquaintance that evolves into something like a friendship, though Faraday is painfully aware that he doesn’t quite fit into the world of the Ayres, even though he is a successful doctor and the family’s formerly posh stature has frayed at the edges over the years.

Faraday is well-versed in the family’s decline because he grew up in the village, and his own mother was a housemaid at Hundreds Hall. Years earlier, as a boy, he visited the place with his mother, and was entranced by the inner workings, even venturing into the hall and stealing a bit of plaster decoration.

Now, strange things are happening in the house. A little girl is injured. There are bumps and ringing bells, unexplained crashes and other occurrences. Faraday, meanwhile, is drawn more and more into the life of the Ayres family. The cause of the mysteries hovers somewhere between science and maybe the supernatural. But there’s a lot that science cannot possibly explain.

The Little Stranger’s themes wind throughout the story like those of a great book, but the movie uses to the tools of cinema to draw us in

The Little Stranger’s literary basis is obvious, in the best possible way — its themes are subtly woven throughout the story in complex, subtle layers. Faraday’s name and his use of electricity to bring life back to Roderick’s leg suggests something a little miraculous, but also inexplicable. “It’s like something out of Frankenstein,” Roderick says when Faraday pulls out the electroshock device, and the way science and technology pop up through the story helps paint a picture of a mid-century England still uncertain about how the explained fits in with the unexplainable.

But the larger themes in the film connect to Hundreds Hall, a once-grand manor that has fallen into some disarray as the fortunes of its inhabits diminish. Yet, as in stories like Brideshead Revisited, the working-class visitor to that world still finds it to be strangely alluring, something he wants to join.

And, thankfully, The Little Stranger is not just reminiscent of literature; it’s also a good movie, one that makes space for ghosts not just in the plot but in the filmmaking. It strategically avoids showing you too much of anything; sometimes, the camera pushes slowly into an empty room in the shabby Hundreds Hall, making us look all around the frame in search of what we’re meant to be looking at, only to find nothing. Other times, a single shot stands in for an entire sequence of events, forcing us to fill in the gaps with our imaginations and rendering some images much more frightening as a result.

The effect is a film that unfolds sparingly. It gives us only enough to encourage us not to get distracted — this is a film you have to invest in if you want to enjoy its satisfying (if still a little mysterious) conclusion. No gesture or shot feels wasted, especially as Faraday’s character grows more complex, and the ending will make you want to go back to the beginning to look for what you might have missed.

As a comment on shifting post-war class dynamics, The Little Stranger is strong. But as a meditation on how class dynamics shape the emotions of the people who live with them, it’s stellar — especially because it’s cleverly couched in the machinations of a modern ghost story. And marrying social commentary with spookiness doesn’t just make for effective storytelling; it underlines just how frightening it is to live in a world where your station in life controls your happiness.

The Little Stranger opens in theaters on August 31.

Jeff Bezos’s antitrust grilling was a reminder of Amazon’s power over its sellers
An artist painted on the American flag. The governor of Kansas wants her work destroyed.
Shia LaBeouf plays his own father in Honey Boy. He’s phenomenal.
Why Elizabeth Warren’s selfie lines matter
Generation Z doesn’t want to hear from you
Trump didn’t want an investigation into Biden. He wanted a political show.