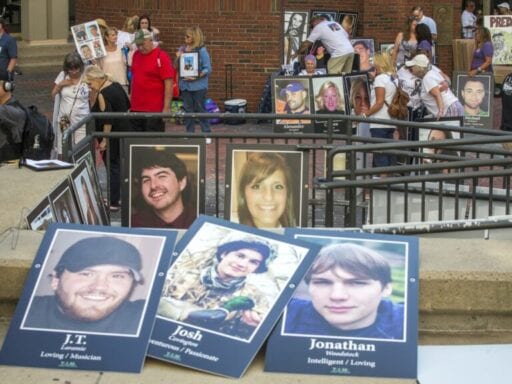 As lawsuits mount against the company responsible for making OxyContin — a drug blamed for helping to spark the nation’s opioid crisis — New York Attorney General Letitia James said on Friday that the family behind the company may have attempted to hide at least $1 billion in assets.

The allegation could lead to the reexamination of a proposed settlement between drug maker Purdue Pharma and plaintiffs who brought more that 2,000 lawsuits against it. And some legal experts believe it could ultimately lead to members of the Sackler family, which owns Purdue, facing criminal charges.

James’s office is pursuing a lawsuit against both Purdue and individual Sacklers, and as part of that suit, issued 33 subpoenas to financial institutions in order to better understand the family’s wealth and influence. The return of one of those subpoenas led to the discovery of the previously undisclosed $1 billion in wire transfers.

The settlement was based on the assumption that the Sacklers collectively possess about $13 billion in wealth, but James argues the transfer could mean the family has far more wealth than previously thought, which would presumably give those pursuing the settlement license to seek more than the $3 billion that has been tentatively agreed to.

“While the Sacklers continue to lowball victims and skirt a responsible settlement, we refuse to allow the family to misuse the courts in an effort to shield their financial misconduct,” James said in a statement.

Purdue faces lawsuits by more than 50 states and territories, and 2,300 cities and counties. Those jurisdictions argue the Sacklers and their company must help to pay for an opioid addiction crisis they profited from and helped to create, and that necessary treatment and recovery programs will cost many billions of dollars. While many local leaders were initially onboard with the tentative settlement, James’s allegations could lead them to reconsider, and to return to the negotiating table in hopes of getting more Sackler money for these programs.

The Sacklers and the opioid crisis, briefly explained

In the 1990s, Purdue Pharma unveiled OxyContin as a non-addictive painkiller. The company encouraged doctors to prescribe their drug “with the promise that misuse, addiction, and overdose would be rare,” as Vox’s German Lopez has explained, because although it contained more opioids than other, similar drugs, it also had an extended-release formula. In fact, that formula made it more prone to misuse, because people soon realized that crushing, snorting, and injecting the pills would allow them to bypass the slow release mechanism.

This discovery — and the misuse of rival opioid-based drugs — launched what is now a full-out opioid epidemic, Lopez writes:

A second wave of drug overdoses took off in the 2000s when heroin flooded the illicit market, as drug dealers and traffickers took advantage of a new population of people who used opioids but either lost access to painkillers or simply sought a better, cheaper high. And in recent years, the US has seen a third wave, as fentanyls offer an even more potent, cheaper — and deadlier — alternative to heroin.

Even as addiction to this pill began to rise, the Sackler family continued to argue that their pills were safe, and that misuse was rare.

David Sackler, who served on Purdue’s board of directors for six years, has repeatedly argued that OxyContin makes up such a small share of the opioid market (about 4 percent of all opioid prescriptions) that it cannot be to blame. But of opioids implicated in misuse and addiction cases, OxyContin makes up a far greater share that 4 percent. And as Vox’s Lopez explained, Purdue is seen as particularly culpable for the current epidemic due to its helping to launch a culture of overprescribing supposedly-safe painkillers:

Purdue also had a significant role beyond OxyContin. By marketing its new opioid as safe and effective, Purdue helped foster an environment in which opioids in general — not just OxyContin — were far more loosely prescribed. As Kolodny and other experts explained in the Annual Review of Public Health, Purdue’s advocacy through “education” campaigns and astroturfs was about how opioids in general are safe and effective — even helping spread the term “opiophobia,” which suggested that doctors were irrationally scared of prescribing opioids.

The marketing push worked; doctors began prescribing the drug more and more. But as use of the drug as a painkiller increased, so did it negative effects: Between 1999 and 2017, nearly 200,000 overdose deaths were linked to painkillers. As Lopez wrote, “much of that can be connected back to OxyContin and other legal opioid painkillers, with people who use even illicit opioids like heroin often tracing their initial opioid use — the thing that got them hooked — to the painkillers and, yes, Purdue and the Sacklers.”

Purdue is facing a historic settlement, but some attorney generals say it’s not enough

This year has marked a sea change in how communities affected by opioid addiction are addressing the issue: They have started taking drug manufacturers to court.

Earlier this year, Massachusetts and New York filed prominent lawsuits in federal court, joining other states, counties, and Native American tribes in alleging the Sackler family continued to market harmful drugs, as well as drugs used to treat the addiction the company’s opioids first triggered, even after they admitted to misrepresenting OxyContin’s addictive effects. Those legal challenges have only mounted over last several months, with hundreds more municipalities filing their own suits against the company.

This week, many lawyers involved in the individual cases expressed support for a deal with the Sackler family that would yield about $12 billion for victims, with $3 billion of that number coming from the family’s personal wealth. But 25 states — including New York — and the District of Columbia have said this deal is not strong enough, and does not force the Sackler family to part with enough of its personal assets.

As Vox’s German Lopez reported earlier this week, the deal requires Purdue to file for bankruptcy and dissolve, but does not require it to admit wrongdoing. A new company would form from the dissolution of Purdue, and continue to sell OxyContin; sales revenue would go to plaintiffs, and the company would also donate drugs for addiction and overdose treatment:

Some politicians and activists have gone further than the lawsuits — demanding not just that opioid manufacturers and distributors pay for the financial harm they caused, but are held criminally liable. Several Democratic presidential candidates have proposed legislation that would attempt to hold individual executives accountable for their role in fueling opioid overprescribing.

New York’s Letitia James is one of those attorneys general who feels the settlement doesn’t go far enough, and one who is working to hold individual Sacklers personally responsible for the epidemic.

In building its case against the Sackler family, her office has filed subpoenas with financial institutions tied to the family. It was one of these subpoenas that uncovered the unreported wire transfers, which were conducted through several unnamed financial institutions, primarily Swiss bank accounts. Some of these transfers were quite large: One wire transfer was worth $64 million and was routed through the Channel Islands, according to Friday’s court filing.

And James alleges that at least one member of the family, Mortimer Sackler, a former Purdue board member, used real estate like a multimillion townhouse that he owned on Manhattan’s tony Upper East Side to conceal assets from the courts.

A spokesperson for Mortimer Sackler denied the former board member — or any member of his family — was attempting to do anything underhanded.

“There is nothing newsworthy about these decade-old transfers, which were perfectly legal and appropriate in every respect,” a spokesman said in a statement. “This is a cynical attempt by a hostile AG’s office to generate defamatory headlines to try to torpedo a mutually beneficial settlement that is supported by so many other states and would result in billions of dollars going to communities and individuals across the country that need help.”

James’s office obviously begs to differ, as does her counterpart in Oregon, who in filing that state’s lawsuit alleged that the Sackler family personally took about $11 billion from their company in the last decade in a manner that both enriched the family and “starved” the company so that it would be able to file for bankruptcy.

It remains to be seen whether the new allegations will lead to an updated settlement. But even if the settlement goes forward as currently drafted, some states (like New York) will continue with their own suits, which could mean more damages for the Sacklers. And as some legal experts told the New York Times, should James and other attorneys general continue to find evidence that leads to allegations like the one New York made Friday, individual Sacklers, particularly those who served Purdue in an official capacity, could find themselves in danger of drawing criminal charges.

What it’s like to deliver weed in a pandemic
For the Record: Sign up for our politics newsletter
Black National Guard members express discomfort with quelling Black Lives Matter protesters
Chuck Schumer wants Trump to redirect border wall money to gun control initiatives
The 2 veterans on the Democratic debate stage made a big promise about Afghanistan
Trump responds to a deadly shooting in Portland by blaming Democrats — and calls for the National Gu...