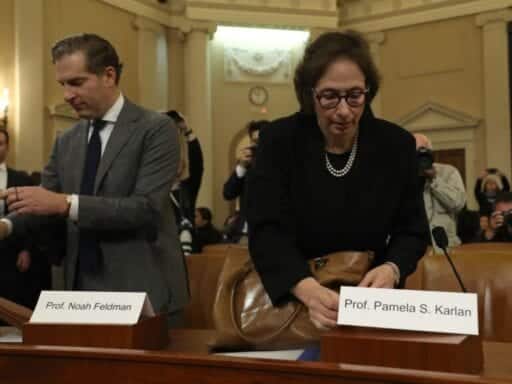 A witness at an impeachment hearing used a play on words using Barron Trump’s name to make a point about presidential powers and Republicans are very mad about it.

Barron Trump is apparently not a name you’re supposed to bring up — even in the most benign of circumstances — lest you want to spark manufactured outrage. Or at least, that was the result of an impeachment witness’s play on words in a point about presidential powers and the Constitution.

Here’s what happened: During the House Judiciary Committee’s first impeachment hearing on Wednesday, one of the witnesses, Stanford University professor Pamela Karlan, made a reference to President Donald Trump’s 13-year-old son, Barron, in explaining the difference between the president and a king.

“Contrary to what President Trump says, Article Two [of the Constitution] does not give him the power to do anything he wants,” Karlan said. “And I’ll just give you one example that shows you the difference between him and a king, which is the Constitution says there can be no titles of nobility, so while the president can name his son Barron, he cannot make him a baron.”

Pamela Karlan: “Contrary to what President Trump says, Article Two does not give him the power to do anything he wants.”

“The Constitution says there can be no titles of nobility, so while the president can name his son Barron, he cannot make him a baron” https://t.co/9B39Dh4kcl pic.twitter.com/7hNaSPwejy

The quip sparked some chuckles in the audience, but the situation quickly spun out of control. The White House and some Republicans cried foul at the use of Barron’s name, since he’s a child. It’s true that it is a norm to leave the president’s children out of partisan attacks, but this wasn’t really an attack. Karlan wasn’t making a dig at Barron Trump, she was just making a point about presidential powers. But here we are.

Soon after the remarks were made, White House press secretary Stephanie Grisham tweeted that Karan had made a “classless move” in using a “teenage boy who has nothing to do with this joke of a hearing (and deserves privacy)” in her testimony. “And what’s worse, it’s met by laughter in the hearing room. What’s being done to this country is no laughing matter,” she wrote.

Then the first lady, Melania Trump, jumped on the issue. “Pamela Karlan, you should be ashamed of your very angry and obviously biased public pandering, and using a child to do it,” she said in a tweet.

A minor child deserves privacy and should be kept out of politics. Pamela Karlan, you should be ashamed of your very angry and obviously biased public pandering, and using a child to do it.

Vice President Mike Pence said the impeachment hearings had “reached a new low” when Barron Trump’s name was used. Trump’s reelection campaign sent out a statement claiming that Karlan’s remarks “reinforced for all Americans that Democrats have no boundaries when it comes to their hatred of everything related to President Trump.” And plenty of other Republicans piled on as well.

Karlan’s cheap shot invoking Baron Trump’s name just lost them any shred of hope that they’re going to win this impeachment battle in the court of public opinion.

I just obtained unanimous consent to enter this into the record. #shameful #ImpeachmentHearing pic.twitter.com/1MfXE7cIMG

“You don’t get to interrupt me on this time! … When you invoke the president son’s name here, when you try to make a little joke out of referencing Barron Trump, that does not lend credibility to your argument. It makes you look mean.” pic.twitter.com/DIgpG5rgSh

By the end of the hearing, Karlan apologized. “I want to apologize for what I said earlier about the president’s son. It was wrong of me to do that. I wish the president would apologize, obviously, for the things that he’s done that’s wrong, but I do regret having said that,” Karlan said.

If this entire controversy feels extremely asinine, it’s because … it is. Karlan wasn’t making any sort of attack on Barron Trump, she was making a point about the limits of presidential powers in the Constitution. Republicans are mad about impeachment, and so they’re grasping at anything they can to further their argument that it’s a partisan witch hunt run by out-of-control Democrats. Speaking the name of a teenage boy is not the end of the world — which, of course, plenty of people pointed out on Twitter, where chatter about weird controversies flourishes.

The Barron/Baron story is useful for exactly one reason: it enables me to tell if someone is a serious person or not. Prof. Harlan made an anodyne play on words that said absolutely nothing negative about Barron Trump. If you’re pretending otherwise, you’re telling on yourself. https://t.co/neLHBubrhQ

Just not seeing how saying Barron Trump isn’t an actual baron is remotely hurtful to a child. Unlike taking them from their parents, caging them, and subjecting them to child abuse. That seems like something to get really upset about.

There are conversations to be had about talking about presidential kids. This is not that.

How and whether to talk about a president’s children, especially when they are young, has long been a question in American politics. There’s a general agreement in American society and the press that they’re off-limits. But Chelsea Clinton, Jenna and Barbara Bush, and Malia and Sasha Obama were all the subject of public scrutiny and discussions about its fairness while their fathers were in the White House. Barron Trump has been, too.

During Trump’s inauguration, Barron Trump was the subject of a lot of jokes and memes, some of which were pretty questionable. One SNL writer remarked that “Barron will be this country’s first homeschool shooter.” She later apologized and was suspended from the show. In August 2017, a Daily Caller reporter criticized Barron Trump’s attire and wrote that “it’s about time the president’s son starts dressing the part.”

These episodes are direct criticisms of Barron Trump and obviously more egregious that Karlan’s play on words. “Barron Trump deserves the chance every child does-to be a kid. Standing up for every kid also means opposing POTUS policies that hurt kids,” Clinton wrote in a Facebook post after the inauguration.

What Trump and Republicans are doing in crying foul about Karlan’s remark is trying to manufacture outrage over a misstep that barely was or, frankly, wasn’t. It’s a play they’ve run over and over again. They’re going to take any opportunity to criticize impeachment they can, including, apparently, this.

Still going to the grocery store? With new variants spreading, it’s probably time to stop.
Bella Thorne and Whoopi Goldberg’s fight over nude photos is bigger than both of them
Progressive activists get a big foreign policy win. It’s been an uphill battle.
Jon Ossoff beats Sen. David Perdue, handing Democrats control of the Senate
Two million federal workers are poised to get paid parental leave for the first time ever
A painter tracked down the thief who stole her work. She discovered a muse.