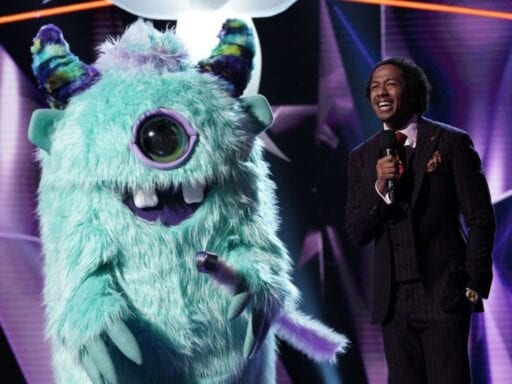 The new reality show feels like something that would be on in the background of a dystopian movie.

The Masked Singer is the future of network television.

It feels, in some ways, like a future I’ve been pointing toward since 2013, when I suggested in an article for the A.V. Club that the future of network TV might look a lot like its past, geared toward slightly bizarre sketch comedy, variety shows, and over-the-top product placement. What’s wild about The Masked Singer — which is a reality show singing competition, but only nominally — is that it’s essentially all of those things at once. (It’s not yet the product placement monster it could be, but give it time.)

And its massive debut ratings — just under 10 million live viewers on January 2, along with a 3.0 rating in the 18- to 49-year-old viewership demographic (only one other show airing that night even slightly crested above a 1.0 in the 18-to-49 demo, to give you a sense of how big it was) — suggest that, yeah, what people want in the future of TV is this:

Of course, we’ll have to wait to see if The Masked Singer can hold on to that viewership in the weeks to come — it’s only aired one episode so far, after all. And already, the internet seems to have sussed out much of the show’s mystery. The whole thing feels decidedly low-rent, as if it was filmed over one long Sunday afternoon and things eventually came to blows in the end.

And that’s in spite of the fact that The Masked Singer is a stupid, unconscionable act of lowest-common denominator aggression on the American public, by a network owned by Rupert Murdoch, a man who has nothing to lose and everything to gain by furiously attempting to dumb us down.

I am going to watch EVERY SECOND of it.

The Masked Singer feels like something people would watch in a dystopian story, and that’s weirdly part of its appeal

Like most successful American reality competition series, The Masked Singer is an import. (For whatever reason, we are terrible at coming up with fresh, original ideas for reality competition shows, while the rest of the world reels them off as a matter of course.) The series originated in South Korea, and American celebrities have stopped by that version of the show to perform as costumed characters. (Most notably: Ryan Reynolds!)

The US version evolves the original idea — which is structured much more as a series of head-to-head battles between singers, and cycles through its celebrity contestants very quickly — into something more like American Idol (itself a British import). Twelve celebrities dress as weird creatures (the monster! The unicorn! The hippo!), then perform a popular tune in costume, as a panel of judges tries to guess who they are. (The Masked Singer’s judges’ panel is almost completely superfluous and could probably be cut, despite the very-2019 energy of established anti-vaxxer Jenny McCarthy sitting right next to licensed physician Ken Jeong.)

The show maintains the head-to-head aspect by having two singers “face off,” with the singer who receives fewer votes disappearing into the episode’s bottom three. (Only six of the season’s 12 singers perform in each episode.) At the end of the program, one of those bottom three is forced to unmask, and the audience gets to either feel impressed at having correctly guessed the singer’s identity or disappointed in how the celebrity is a C-lister.

In the series premiere, the eliminated celebrity was Antonio Brown of the Pittsburgh Steelers, who is probably the best wide receiver playing right now but also isn’t exactly a household name on the level of, say, Tom Brady or even someone like Seattle Seahawks quarterback Russell Wilson. Brown captures almost perfectly everything about The Masked Singer in a nutshell. This first season was filmed last summer, so he had time away from the field to compete. He wasn’t a particularly great singer. And he’s famous but perhaps not FAMOUS. If you follow the NFL even slightly, you probably know who he is. But if you don’t, he hasn’t crossed over into more general fame (though he did compete in a season of Dancing with the Stars).

Oh, and he dressed as a hippo.

I don’t entirely know how to explain just how silly and stupid this show is, while also being completely absorbing. I watched the first hour mostly to write this article, but now I’m totally in in a way that I don’t think I ever have been with a reality competition series like this one, even ones that are much, much better. Like, sure, Top Chef and Project Runway at their best were genuinely thrilling explorations of the creative process, but they didn’t have Terry Bradshaw dressed as a deer.

(Okay, I don’t know that the deer is Bradshaw, but if you watch the episode and listen to his cadence of speech — even though his voice is heavily disguised in the non-singing portions — you’ll see where I’m coming from, provided you’re familiar with the former Steelers quarterback-turned-NFL commentator from having watched any football on television ever before. Also, Bradshaw is under contract with Fox, and you can absolutely imagine him saying, “What the hell why not!” when somebody presented the idea to him.)

To watch The Masked Singer is to feel vaguely like you’re living in a dystopian movie, but also knowing that you’re one of the placated, one of the sheeple who sits and watches the rock-stupid hit TV show that keeps everybody from questioning the unjust society they live in while the protagonists roll their eyes at your complacency. To watch it is to wonder if Neo and Agent Smith from The Matrix are having a mind-bending fistfight right behind you that you would see if you just turned around and looked away from The Masked Singer’s wonders. Except then you might miss the Monster!

If The Masked Singer remains a hit, it will likely mark a return to big, stunt-driven reality shows on the part of the broadcast networks, whose centrality to the TV landscape has all but ended yet who continue to persist as major outlets through sheer cultural inertia. Reality programming is cheap as hell to produce — again, this thing feels like it was filmed in a single afternoon last August, because everybody involved lost access to the studio after 5 pm — and often draws massive viewership. Leave the quality programming to cable and streaming! Embrace the future of low-rent junk that’s nonetheless impossible to stop watching!

But more specifically, The Masked Singer is the future of Fox, a network that’s about to lose its connection to 20th Century Fox, the studio that makes most of its TV shows, because Murdoch sold off the studio to Disney but couldn’t sell the TV network. (Disney already owns ABC and can’t own two major broadcast networks at once.)

Thus, Fox is increasingly filling its airwaves with sports, cheap reality, and multi-camera comedies (which are cheap to make because they’re filmed entirely on soundstages on standing sets in front of live audiences). It is a network built atop the ruins of a business model that made a lot of people a lot of money until it didn’t, and it is filled with disposable programming you won’t remember in a couple of weeks.

But it’s working. Fox is currently a strong second-place challenger to frontrunner NBC in the race to become the season’s top network, and if The Masked Singer continues at this clip, it might just eke out a come-from-behind win. You don’t have to make great TV to succeed any more. You just have to make TV that makes people go “WTF IS THAT????”

The Masked Singer airs Wednesdays at 9 pm Eastern on Fox. The premiere episode is available on Hulu.

The Supreme Court’s surprising decision on churches and the pandemic, explained
The US killed Soleimani. What will Iran do next?
The first sitting member of Congress has died of Covid-19
America’s growing fake news problem, in one chart
We asked 8 young people why they joined the global climate strike
Weinstein’s lawyers tried to kick out a juror for reading a novel about a predatory man