The menacing symbolism of the noose 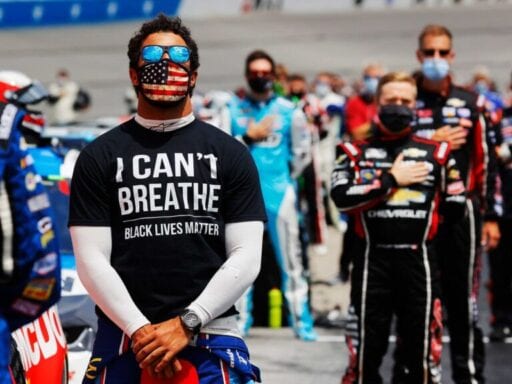 Bubba Wallace, the only full-time black NASCAR Cup Series driver, wears a “I Can’t Breathe – Black Lives Matter” T-shirt on June 7 in Hampton, Georgia. A noose was found in his garage stall in Talladega, Alabama, on June 21. | Chris Graythen/Getty Images

Noose incidents are uncoincidentally on the rise, as protesters continue to demand justice for black lives.

On Sunday, Darrell “Bubba” Wallace Jr., the only full-time black driver in NASCAR’s elite Cup Series, found a noose in his garage stall. This comes two weeks after Wallace called on NASCAR to ban the Confederate flag at its events and venues.

“We are angry and outraged, and cannot state strongly enough how seriously we take this heinous act,” NASCAR said in a statement on Monday, noting they are investigating the incident.

In a statement of his own, Wallace acknowledged the racist symbolism of the noose. “Today’s despicable act of racism and hatred leaves me incredibly saddened and serves as a painful reminder of how much further we have to go as a society and how persistent we must be in the fight against racism,” he wrote.

The presence of a noose in Wallace’s team garage comes at a time when black men are being found dead and hanging from trees, and when people are reporting noose sightings in cities across the country from the Bronx, New York, and Altoona, Iowa to Deer Isle, Maine. And in some cases, like in Oakland, California and Birmingham, Alabama, on-edge residents have apparently mistaken ropes in trees as nooses, though law enforcement officials still say they plan to investigate the incidents to confirm that they aren’t hate crimes.

While some have tried to downplay the symbolism of nooses, the latest incidents fit a trend: Noose sightings have been on the rise since President Donald Trump was elected into office. The increase in occurrences — when Americans are taking to the streets to protest against racism and police brutality — speaks to the potency and long history of the noose’s power as a menacing symbol of racism and white supremacy.

“Right now, Black people are asserting their humanity and white people have not wanted that to happen,” Denison College associate professor Jack Shuler, and author of the book The Thirteenth Turn: A History of the Noose, told Vox. “This is an obvious response to [Wallace’s] activism and his demand that the Confederate flag be removed, another racist symbol in our country. This incident just shows the slow and steady hum of hate.”

According to Shuler, hanging has been a method of execution for thousands of years, with almost 9,500 people being hanged legally in America; the last legal hanging occurred in 1996. But it is the illegal hangings that give a particularly ominous weight to the noose. In the late 1800s and early 1900s, the lynching epidemic killed almost 5,000 people, 75 percent of whom were black. These victims were hanged from trees, bridges, and telephone poles. According to Shuler, the noose, or hangman’s knot, was usually perfectly tied as seen in the images of mob lynchings. The noose cannot be untied from its racist foundation.

These lynching events were not Klan events, Shuler emphasizes, but events where everyone from the community were present. As historian Nicholas Creary told Vox’s Anna North, to be considered a lynching the incident must have taken place at the hands of a group. “That recognizes that lynching is fundamentally a community action. There are a whole lot of people involved and there is coordination,” Creary told Vox. The spectacle of the public lynching worked to “keep blacks in their so-called space” and managed to enforce a culture of silence around the perpetrators, Creary said.

Similarly, the presence of nooses today rocks communities in the workplaces, schools, and other locations where they are found. “The noose is the new burning cross and unmistakably an object that white people use to intimidate black people and remind them of this country’s history of lynching,” Shuler said.

Noose-making is both racist and not illegal in the way that burning crosses — one of the Ku Klux Klan’s most egregious terror symbols — is. “They’re portable and easy to do. All you have to do is get a rope from Home Depot and look on YouTube to figure out how to make a noose,” Shuler told Vox.

And that’s part of the problem. US law does not prohibit nooses used as objects of harassment and intimidation. To be ruled a hate crime, law enforcement officials scrutinize the specifics of where it was placed and by whom, and whether it was placed with the intention to harm a specific group, with statutes varying state by state. After a black woman discovered a noose hanging in a Delaware Home Depot in 2019, police ruled that the incident did not qualify legally as a hate crime since there was no clear, chosen victim who was targeted because of their race or other protected status. The person who tied the noose came forward and said it was part of a project that involved rope knot decorations.

In 2011, Texas Rep. Sheila Jackson Lee introduced a bill, the Noose Hate Crime Act, to amend the federal code to “impose a fine and/or prison term of up to two years on anyone who, with intent to harass or intimidate any person because of that person’s race, religion, or national origin, displays a noose in public.”

Much like an anti-lynching bill that has been introduced in Congress many times over the years, the noose bill did not pass.

In Trump’s America, the symbolism of the noose has become no less visible. In 2017, the nonprofit legal advocacy organization Southern Poverty Law Center (SPLC) reported that “hate-fueled acts of intimidation and harassment” in public surged as the Trump administration hit five months in office. At the time, SPLC documented 1,863 bias incidents since the day after the 2016 presidential election until March 31, 2017, and found that 15.6 percent of the incidents were anti-black motivated, with the display of nooses being “one of the most pervasive manifestations of these happenings.”

After Trump took office, nooses were placed on university campuses, at middle schools and high schools, and in various neighborhoods and museums in Washington, DC. In many of these incidents, the noose could be linked to an effort to intimidate and incite fear in black people, according to the SPLC. For example, bananas with hateful messages were found hanging from nooses on American University’s campus, at the time the institution’s first black woman president of the student government was set to assume her new role.

The SPLC wrote that these incidents were gaining more attention because of the administration’s “governing motives and tactics.” “Throughout the campaign season, Trump incited hatred and violence amongst his followers, urging them to confront diversity with hostility. He has continued to endorse such tactics throughout the beginning stages of his presidency with various political appointees, travel bans, unfeasible ‘infrastructure’ and attacks on basic healthcare rights,” the SPLC wrote.

Still, as Shuler pointed out, many noose incidents likely go unreported. Plus, law enforcement officials must occasionally sort through false claims and incidents with little evidence that is clear-cut.

But that doesn’t mean Trump hasn’t continuously stoked anti-black sentiment during his four years in office with racist messaging like “Send her back!” which he screamed at a rally in reference to Ilhan Omar, and “Get that son of a bitch off the field” in reference to athletes who were protesting against racism and police brutality. This weekend, he hosted a campaign rally in Tulsa, Oklahoma, where he spewed racist stereotypes and used the term “thugs” to describe protesters, among other remarks. Critics decried the timing of the rally, originally scheduled for Juneteenth, a holiday that commemorates the end of slavery, and the location, the site of one of the country’s most brutal white supremacist massacres.

And now, while the country mourns the death of black people at the hands of police and white community vigilantes, from Ahmaud Arbery to Breonna Taylor to Tony McDade, symbols of white supremacy and hate feel especially targeted and malicious. According to experts, the intentional placement of a noose is an unmistakable response from people across the country who wish to preserve the status quo while sending a message of fear and bigotry.

“As my mother told me today, ‘They are just trying to scare you,’” Wallace said. “This will not break me, I will not give in nor will I back down. I will continue to proudly stand for what I believe in.”