The Miami Dolphins acted on the NFL’s anthem policy. The league was unprepared for the backlash. 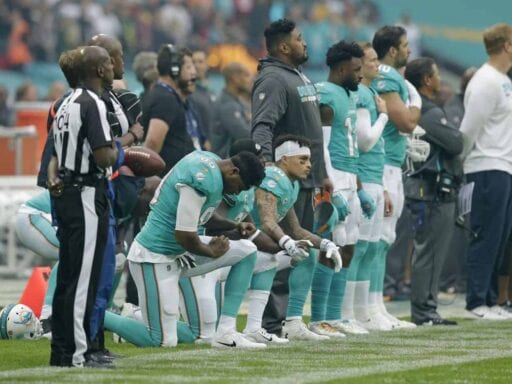 The NFL is putting its anthem policy on hold after leaked documents prompt criticism.

When the NFL announced in May that it would require all players on the field to stand during the national anthem or potentially face team fines, the league sought to finally end backlash to the kneeling protests against racial injustice that dominated coverage for the past two seasons. Now the NFL will put the anthem rule on hold after a fresh round of criticism this week.

The controversy began Thursday when the Associated Press reported that the Miami Dolphins had created a team anthem policy to suspend or fine players for kneeling. According to the AP, a leaked copy of team discipline rules included a brief, one-sentence section on “Proper Anthem Conduct.” The document classifies the kneeling protests under a larger list of “conduct detrimental to the club,” that could lead to suspension, a fine, or both. Other violations on the list include “drug use or possession, gambling, breaking curfew and riding motorcycles as a driver or passenger.”

The leaked document, part of routine paperwork that teams submit to the NFL prior to the start of preseason training camps, was the first time that a team had indicated how it would enact the league’s new national anthem policy. In May, all but two of the owners of the NFL’s 32 teams voted to require all players on the field to stand for the national anthem. Those who did not would have to remain in the locker room. Players on the field who knelt would potentially face fines or suspension depending on their team’s rules.

The Dolphins’ management said the leaked document was not a finalized copy of team rules, adding that “all options are still open” when it comes to its individual anthem policy. Nonetheless, the documents quickly revived a debate that has only become more contentious since the league announced the policy. By Thursday evening, NFL leadership and the NFL Players Association, which recently filed a grievance against the league for implementing the policy without player input, announced the policy would be postponed as the groups attempted to work out a compromise.

“Our shared focus will remain on finding a solution to the anthem issue through mutual, good faith commitments, outside of litigation,” the groups noted in a joint statement Thursday evening.

The Dolphins’ controversy is just the latest in a wave of backlash against the NFL’s anthem protest policy, which has attracted heavy criticism from players as well as President Donald Trump, whose frequent criticism of kneeling players almost certainly played a role the policy’s creation. And it suggests that as the season approaches, the NFL’s efforts to tamp down on the kneeling protests have only pushed the matter further into the spotlight.

The NFL was blindsided by backlash to the anthem policy. It shouldn’t have been.

When the NFL announced its new anthem policy back in May, the intention was to finally end controversy over the protests. “It was unfortunate that on-field protests created a false perception among many that thousands of NFL players were unpatriotic,” NFL commissioner Roger Goodell noted in a statement. “This is not and was never the case.”

The protests began two years earlier in the summer of 2016 when then-San Francisco 49ers quarterback Colin Kaepernick sat during the national anthem at several preseason games to protest America’s treatment of people of color. Kaepernick later switched his protest to kneeling, and a number of other players joined his protest during the 2016 season. One year later, the protests continued, although with less participation than before. Throughout both seasons, players noted that they were kneeling to protest a range of injustices against people of color, including systemic racism, police violence, and inequality.

But backlash to the protests mounted last September when Trump called kneeling players “sons of bitches” who should be fired. Trump has repeatedly framed the protests as being about patriotism rather than racial injustice, arguing that kneeling protesters did not respect America or the flag.

At first, the league reacted defiantly to Trump’s comments, with several owners briefly joining their players in the protest. But as the season closed, and players’ protests continued, it was clear that they were looking for ways to make the issue go away.

The anthem policy was promoted as the solution, requiring players on the field to stand during the anthem, but allowing them to remain in the locker room if they wished. Instead, the supposed compromise only attracted more criticism, with players noting that the policy once again misconstrued the purpose of the protests by suggesting that the players’ actions were in opposition to the anthem and the flag. Others criticized the NFL formaking the decision without their input.

While the NFL announced the policy and hoped to quickly move on, that was always unlikely to happen. On July 18, Tennessee Titans player Jurrell Casey said that he planned to continue the protest in spite of potential fines, suggesting that the league would be forced to penalize players. And as other teams submitted their policies for the season, it was likely that more teams would catch heat for adding new rules about the anthem.

But even if those things hadn’t happened, the NFL anthem policy would have continued to be news. That’s because President Trump, whose criticism largely served as the main catalyst for the anthem policy, openly hates it.

The NFL anthem policy was intended to appease President Trump. That didn’t happen.

During his time in office, President Trump has proved remarkably adept at taking racial issues and turning them into full-blown culture wars. The NFL protests were no exception, with the president regularly raising the issue to rile up his supporters.

And while the president briefly praised the anthem rule, telling Fox News in May that “the NFL owners did the right thing,” it wasn’t long before he had settled on a new line of attack against the NFL.

It began in June, when Trump reignited the issue by disinviting the Super Bowl Champion Philadelphia Eagles from the White House, claiming that the team “disagreed with their president because he insists that they proudly stand for the national anthem.” The Eagles never kneeled during the 2017 season. Trump would criticize the NFL again later that month, saying that he didn’t think players were protesting “a real issue.”

In the weeks since, Trump — who reportedly told Dallas Cowboys owner Jerry Jones that attacking the protests was a “winning” issue — continues to criticize the new anthem policy at rallies. During a July 5 rally in Montana, Trump suggested that the policy was “worse” than letting players kneel. If you don’t respect the flag or you don’t like the country or whatever it is, just go into the locker room,” Trump said. “Just go into the locker room. I think in many respects that’s worse. Isn’t that worse than having them not standing?”

With the regular NFL season slated to begin in September, the league finds itself in a position where it has only managed to anger both protesting players and those who oppose them. As owners and players enter a new round of discussions, there’s a chance that it can work with players to find a better solution. But even if that better solution is reached, the league will have to deal with the fact that it became engulfed in a PR nightmare of its own making.

Chart: How coronavirus is devastating the restaurant business
Another way coronavirus will make Americans’ lives worse in the long term: More guns
Twitter is considering warning users when politicians post misleading tweets
Could this be Trump’s orange makeup?
These are the trade-offs we make when we depend on billionaires to save us
Amazon suspends police access to its facial recognition technology. But only for one year.