The Minnesota primary elections, one of 2018’s fiercest battlegrounds, explained 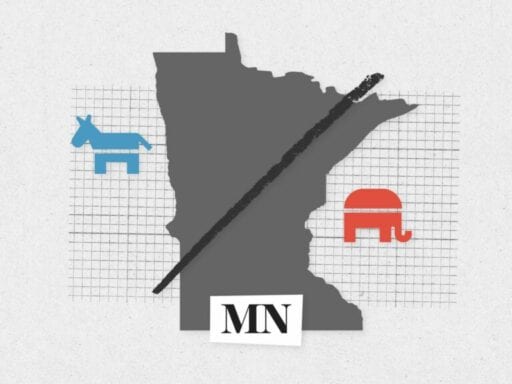 Why Republicans and Democrats are both eyeing seats in Minnesota.

With a Democratic governor and two Democratic senators, Minnesota has a reputation as a blue state, but make no mistake: The Land of 10,000 Lakes has a purple hue. The state went for Hillary Clinton by 46.4 percent in 2016, but Donald Trump wasn’t too far behind at 44.9 percent.

These days, though, Trump isn’t faring so well here. His approval rating is hovering around 38 percent among registered voters, compared to the 51 percent of voters who say they disapprove of him, according to an NBC News/Marist poll released last month. The national political climate, and backlash against Trump, is going to be a challenge for Republicans if they hope to make any gains in Minnesota in the 2018 midterm elections.

Still, the GOP is fielding credible candidates in a lot of races here, with a particular eye on taking back the governor’s mansion now that Democratic Gov. Mark Dayton is not seeking reelection. Meanwhile, Democratic National Committee vice chair and US Rep. Keith Ellison is running for Minnesota Attorney General, but he faces allegations of domestic abuse just days before the primary.

With a handful of competitive congressional seats, the state could also be critical in the battle for control of the House in the 2018 midterm elections. Two longtime Democratic Congress members in more conservative districts are running for governor and lieutenant governor, giving Republicans a few of their only chances to win seats from Democrats. But Democrats also have openings to pick off a few House districts, in their quest for a majority.

Minnesota governor primary elections: the tale of two Tims in the race to replace the retiring governor

Who are the Republicans? Former Gov. Tim Pawlenty (you may remember him for his very short-lived race for president in 2012), and former state Rep. Jeff Johnson, who also ran for governor in 2014 and lost to Dayton.

What’s the story? The Democratic primary in Minnesota contains all of this year’s big political themes. Murphy — a former nurse — is running on a Medicare-for-all platform and picked up an endorsement from the state Democratic Party, though that doesn’t necessarily mean much in Minnesota.

Walz and Swanson actually look like the frontrunners: a July NBC News/Marist poll found 28 percent of Minnesota primary voters favored Swanson, 24 percent supported Walz, and 11 percent backed Murphy. Walz represents a more conservative part of the state in Congress, and is being forced to reckon with his past stance on guns — one that had earned him an A rating from the National Rifle Association.

There’s not a lot of new blood on the Republican side, which is shaping up to a race between a former governor and a former nominee for governor. Pawlenty certainly has a lot more name recognition and cash than Johnson, reflected in his 19-point lead in that NBC News/Marist poll.

But Pawlenty also has some vulnerabilities; notably, his moneyed establishment ties (he’s worked as a lobbyist after leaving the governor’s mansion in 2011) and his disavowal of President Trump, which could hurt him with Trump voters in the state.

As for the general election? The nonpartisan Cook Political Report rates this a toss-up, but the NBC poll found Pawlenty trailing all three Democratic contenders.

Who are the Democrats? Sen. Tina Smith, the former lieutenant governor whom Dayton appointed to Senate in wake of Al Franken’s resignation after a sexual misconduct scandal, is running again. She’s facing a primary challenge from former Bush administration official Richard Painter, who has been active calling out the Trump administration’s ethics violations — but it doesn’t look like a very competitive race.

What’s the story? Smith and Housley will probably emerge victorious in their respective primaries on Tuesday. As for the general election, this race looks to be pretty comfortably Democratic. Cook rates it Likely Democratic. Smith has pretty much kept her head down and voted with the Democratic caucus as a freshman senator; she was already popular in the state before being appointed, so it’s unlikely she’ll be voted out. She has a double-digit lead in a hypothetical matchup with Housley.

What’s the story? Ellison, the first Muslim elected to Congress and a progressive firebrand, is easily the most recognizable name in the pack of Democrats running to replace Lori Swanson, who is now running for governor. Ellison has promised to stand up to the Trump administration through the courts.

On Sunday, the son of Ellison’s ex-girlfriend wrote a lengthy Facebook post alleging that Ellison had been abusive. The claims have not been independently verified, and Ellison has denied mistreating the woman. Hilstrom, the only woman running in the attorney general race, called on Ellison “to answer these allegations” just a few days before the primary.

This post was brought to my attention because I was tagged in this post. Domestic Violence is never ok. The incidents described are troubling. I call on Keith Ellison to answer these allegations.https://t.co/CQ1LSVfZqf

On the Republican side, Wardlow is promising to enforce the “rule of law” in Minnesota. There aren’t many available ratings for this race, but the state has only elected a single Republican attorney general since 1955 … so it seems safe to say the eventual Democratic candidate is favored to win.

Minnesota’s First Congressional District: can Democrats hang on to the seat vacated by Tim Walz?

Who are the Democrats? Iraq War veteran and Obama administration official Dan Feehan. Tim Walz, the district’s current representative, is seeking the Democratic nomination for governor.

Who are the Republicans? Former US Treasury Department official Jim Hagedorn and state Sen. Carla Nelson.

What’s the story? Walz is well-liked in this relatively conservative region of the state; he was reelected to six terms by running as a moderate Democrat. But now that he’s departing, it’s not a given that Democrats can replicate his success.

Feehan has the imprimatur of the Democratic Congressional Campaign Committee. He’s running as moderate — in favor of protecting the Affordable Care Act, the state’s farmers, and the military. Hagedorn and Nelson are both running on conservative platforms and embracing the politics of President Trump. Walz’s exit is one of the few good opportunities for Republicans anywere in the country — Cooks rates the district R+5 (which means, all else being equal, it leans five points more Republican than the rest of the nation) and a toss-up.

Who is the Democrat? Former journalist and hospital executive Angie Craig. She ran for this seat in 2016 (and lost) and has the DCCC’s backing.

Who is the Republican? Rep. Jason Lewis, in office since 2017.

What’s the story? You may know Jason Lewis from the torrent of explosive comments he’s made on his former right-wing talk radio show. He once complained about how it was no longer politically correct to call women “sluts,” equated LGBTQ people to “rapists” and other criminals, and said that “young single women” who vote to protect their access to birth control didn’t have brains.

Craig, on the other hand, is an openly LGBTQ candidate and mother who is hoping to draw a contrast with Lewis on social issues and his controversial commentary. She competed against him in 2016 and lost, but Democrats are hoping this year will be a more favorable environment. The district is R+2, and Cook has put it into the toss-up category.

Who is the Democrat? Distillery CEO and philanthropist Dean Phillips, who also has the backing of the DCCC.

Who is the Republican? Rep. Erik Paulsen, in office since 2009 and a member of the powerful Ways and Means Committee.

What’s the story? Paulsen was first elected 10 years ago and seems to be pretty popular in his district. He’s a moderate who didn’t support Trump in 2016; he wrote in Marco Rubio instead. But he sticks reliably with House Republicans, casting votes for both Obamacare repeal and GOP tax cuts.

Phillips is hoping he can draw a contrast, but he’s the kind of candidate the Democratic base is pushing back against. He comes from wealth and has made a fortune off his family’s liquor business and gelato company. He has been upfront about this, and vowed to run without self-funding his campaign or accepting PAC money, though he’s still getting plenty of money from various industries. The district should be competitive; Cook rates it D+1, and the Third District went for Hillary Clinton by 10 points in 2016.

Who is the Democrat? Rep. Collin Peterson, in office since 1991 and ranking member on the Agriculture Committee.

What’s the story? This district is the strange amalgamation of both being rated R+12 and yet still in the Likely Democratic category by Cook. That’s because Collin Peterson has been in the House for a really, really long time.

He was first elected in 1990 and is the longest-serving House member in the Minnesota delegation. There’s a reason Democrats want Peterson to stay — he’s been consistently reelected in a conservative district. Peterson has a record to reflect that; he’s a friend to farmers in a rural district dominated by agriculture and tends to vote more conservative. Hughes ran against Peterson in 2016 and lost by 5 percentage points.

What’s the story? The Eighth Congressional District is another conservative-leaning one that Democrats have nevertheless managed to hang on to. Democratic Rep. Rick Nolan, elected in 2012, is vacating his seat to join the ticket of gubernatorial candidate Lori Swanson. With Nolan out, Republicans see a prime opportunity to win back control of a district Cook rates R+4.

There’s a large field of Democrats running to be the nominee, and there isn’t a clear frontrunner so far. The state party hasn’t yet endorsed a candidate, although Metsa is leading the race in campaign cash. But Democrats are nervous about the prospect of challenging Stauber — a well-known local politician who has out-fundraised all his Democratic competitors so far.

Marc Short, Trump’s director of legislative affairs, joins the very long list of White House departu...
Trump just started a new trade war with … Brazil and Argentina?
America doesn’t want another Tea Party
“Hair can wait”: A stylist on what it’s like to go back to work in Georgia
E3, the biggest video game event of the year, is canceled because of coronavirus
The White House went dark as protests raged outside