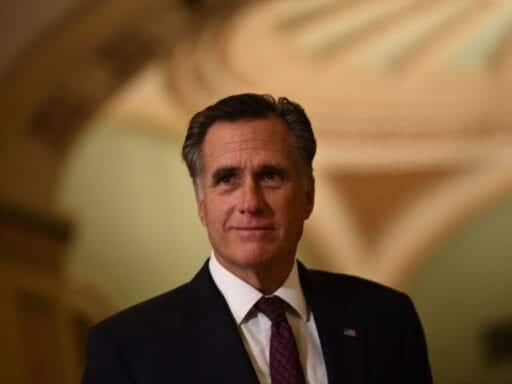 The conservative “look what you made me do” theory of Republican politics — Democrats were so mean to Romney that they got Trump — has more than a few problems.

Mitt Romney, the only Republican senator to vote to convict President Trump during his impeachment trial, once again defied his party this Sunday — marching in a Black Lives Matter demonstration and telling reporters that he was doing so to “end brutality.”

His actions displayed the moral decency and leadership that have rarely been seen from Republican officials in the Trump era. Romney’s actions caused one prominent political writer to advance an argument that many conservatives have embraced in the Trump era — that Democratic attacks on Romney during the 2012 presidential campaign are to blame for the GOP’s radicalization and the emergence of Trump.

“It was the left’s (and the media’s) treatment of Romney that numbed the electorate to real, valid concerns about ‘character’ four years later,” writes Tim Alberta, Politico’s chief political correspondent. “The mistreatment of this man, the demonization of him on a personal level by opponents in both parties, will be studied for decades to come.”

On this view, Democrats smeared the kind and decent Romney so brutally — attacking him as a heartless “vulture capitalist” who hated minorities — that Republicans became inured to this kind of argument and convinced there was no advantage to playing nice anymore. Call it the “look what you made me do” theory of How We Got Trump.

“All those stereotypes Democrats fabricated to assail Mitt Romney helped inoculate Trump against similar charges,” Noah Rothman writes in Commentary. “In this sense, the Obamans themselves helped clear the way for Trump.”

The evidence for these claims is vanishingly thin.

About as many Republican voters supported the notion of a Trump presidential run in April 2011 as in the fall of 2015, suggesting that Trump’s very public embrace of birtherism in the early Obama years was hardly a turnoff even before Romney. Republican politicians and conservative elites were generally hostile to Trump early in his primary run; it wasn’t anger over Romney’s treatment that forced them to embrace their new leader, but the will of the party’s voters.

There’s also no reason more broadly to believe that mean campaigns lead to radicalization in this fashion. If they did, then Republican attacks on Barack Obama as a Kenyan socialist Muslim and Hillary Clinton as a felon who did Benghazi would have led Democratic voters to embrace someone like Michael Avenatti, the outspoken anti-Trump lawyer. Instead, they picked Joe Biden.

The “look what you made me do” theory is an effort by the conservative elite to declare themselves innocent: to look out at an America governed by a man who has ignored a pandemic and stoked police violence against peaceful protesters and say, “Republicans are not responsible for this.”

Why the Romney martyr myth matters

But a brief look at campaigns past will tell you that the attacks on Romney were not especially egregious. Political opponents lie about each other, often in despicable ways, but they do it frequently.

Republican members of Congress all but openly accused the Clintons of killing White House attorney Vince Foster. George W. Bush strategist Karl Rove was reportedly responsible for a rumor, spread during the 2000 South Carolina primary, that John McCain had fathered an illegitimate black child. In 2004, a Republican-aligned group called “Swift Boat Veterans for Truth” systematically distorted John Kerry’s record of military service; their lies were so egregious that the term “swift boating” is now synonymous with launching scurrilous campaign attacks. In 2008, vice presidential candidate Sarah Palin accused Barack Obama of “palling around with terrorists who would target their own country.”

In other words, the 2012 Obama campaign’s attacks on Romney were hardly outside the norm.

The more important story of the Romney campaign for understanding Trump is not the way Democrats talked about Romney, but the way Romney talked about himself during that time — when he campaigned not as a moderate but as a “severely conservative” Republican.

Romney wasn’t exactly a bulwark standing in the way of the party’s lurch to the far right. If anything, he helped encourage it.

This is the problem with the “look what you made me do” narrative. It serves to bifurcate Republican history into the pre-Trump and post-Trump eras, as if what happened in 2016 was some kind of anomaly. It serves to indemnify the GOP and conservatism from the Trumpist takeover, when in reality Trump is the logical conclusion of what Republican politicians have been doing for decades.

There’s a familiar story, rigorously documented by political scientists and discussed in Alberta’s book American Carnage, about how the Republican Party became the party of racial resentment. In short, the GOP took advantage of the Democratic embrace of civil rights under Lyndon Johnson to become the party of resentful whites — beginning with what Richard Nixon called “the Southern strategy,” continuing through Ronald Reagan’s attacks on “welfare queens” and George H.W. Bush’s infamous Willie Horton ad, and serving as fuel for the entire Tea Party movement and anti-Obama backlash.

Over time, whites with high levels of prejudice and racial resentment sorted themselves into the GOP, creating a critical mass of voters open to an even more racially aggressive style of politics. Trump is the bill for this particular devil’s bargain coming due: a Republican primary electorate that preferred Trump’s overt racism to the more coded racial appeals of Republicans past.

The GOP elite used racial resentment as part of a winning electoral strategy — setting the stage for a Trumpist takeover of their party.

“Instrumentalized racism did not originate within the right nor within conservatism,” my colleague Jane Coaston writes. “The right decided to embrace it, and has clutched it all the more tightly in response to concerns from political and cultural rivals and allies alike while excusing it as how ‘forgotten Americans talk’ or what ‘real Americans’ really think.”

The real purpose of the Romney martyr myth is to obscure this reality, to whitewash Republican elites’ responsibility for Trump’s political rise and the mess Americans find ourselves in. It both excuses them and justifies them in continuing to wage war on Democrats, their real enemy, rather than recognize that their own movement has set the stage for the crisis. The liberals must always be wrong, the conservatives must always be innocent.

It’s much easier for them to be anti-Democrat — that is, anti-anti-Trump — than to try to look harder at what they themselves have done wrong. “Personal responsibility” is apparently great when you’re talking about black people, but it goes out the window when it comes to conservatives.

US could see 100,000 coronavirus deaths, Italy extends lockdown: Wednesday’s coronavirus news
Hunter Biden resigns from a Chinese firm amid controversy over his business dealings
Facebook’s war against one of the internet’s worst conspiracy sites
Joe Biden has tested negative for coronavirus after debate with Trump
5 things to know about Spain’s snap elections
How 3.4 million chickens drowned in Hurricane Florence