The moral philosophy of The Good Place 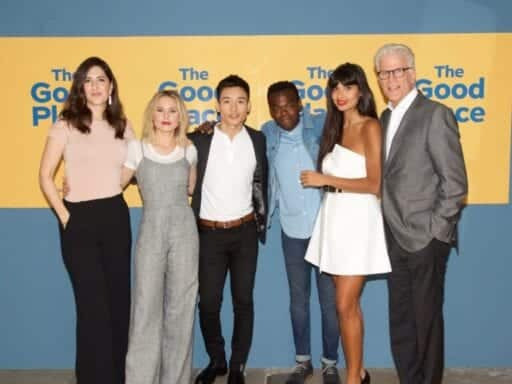 The geniuses behind TV’s most philosophically inclined sitcom discuss what it means to be a good person.

After creating and running Parks and Recreation and writing for The Office, Michael Schur decided he wanted to create a sitcom about one of the most fundamental questions of human existence: What does it mean to be a good person? That’s how The Good Place was born.

Soon into the show’s writing, Schur realized he was in way over his head. The question of human morality is one of the most complicated and hotly contested subjects of all time. He needed someone to help him out. So, he recruited Pamela Hieronymi, a professor at UCLA specializing in the subjects of moral responsibility, psychology, and free will, to join the show as a “consulting philosopher” — surely a first in sitcom history.

I wanted to bring Shur and Hieronymi on The Ezra Klein Show because The Good Place should not exist. Moral philosophy is traditionally the stuff of obscure academic journals and undergraduate seminars, not popular television. Yet, three-and-a-half seasons on, The Good Place is not only one of the funniest sitcoms on TV, it has popularized academic philosophy in an unprecedented fashion and put forward its own highly sophisticated moral vision.

In the show, there’s a character named Doug Forcett who spends his life trying to just earn [moral] points. He wakes up every day and just tries to do the most good he can do for everybody else to get the most goodness points. And as a result he’s barely a person anymore. He’s not living a good life — he’s serving a master. And the master is this idea of goodness.

Another character on the show is Chidi, an extreme Kantian who’s all the way on the opposite end of the [philosophical] spectrum. He’s so obsessed with the idea that there are strict rules that you can follow to be a perfect person that he’s utterly paralyzed with indecision.

I think the show is sort of aiming at this idea that if you serve any of these masters too fully or too completely, you’re going to live a sad life. You’re not going to do what Aristotle called “flourishing.” The show ends up being pretty Aristotelian. After four years, we’ve landed in this place where we feel like the attempt to be good, the attempt to achieve virtue, and the idea of pursuing good is more important than whether you won the race. Because the people that we’ve shown who have won the race — those who have maximally fulfilled whatever philosophy they particularly espouse or believe in — are miserable.

This vision is the subject of our conversation. We discuss what it means to have “good” moral motivations, why some people are assholes, what we owe to those living in our communities (and across the world), how our social environments influence our moral reasoning, and a theme I’ve been exploring recently on the show: the disconnect between our fallible human psychology and our moral ideals.

The emotions and attitudes that constitute our ordinary interpersonal relationships operate at a different scale than the abstract obligations that we have to people at a great distance from us. Take veganism or feminism — things where people’s intellectual convictions and beliefs about what is wrong often run ahead of their emotional reactions. If I were to have the emotional and interpersonal reactions that I think would be actually justified by factory farming, I’m going to quickly alienate all kinds of people around me.

So it seems to me that our attitudes and emotions — which are not subject to our immediate voluntary control — and our principles of what people deserve and how to treat sentient creatures don’t march in step. And the fact that they don’t march in step leaves us in the state where that we find ourselves — where our ordinary lives are maybe aspiring to push towards our ideals but can’t get there right away.

Unlike a lot of conversations about moral philosophy, this one is a lot of fun.

Kamala Harris asked Brett Kavanaugh if men could be friends with some women — while hurting others
Bolivian President Evo Morales resigns following mass protests
The neoconservative fantasy at the center of the Suleimani killing
Vox Sentences: LA’s teachers are still striking
The siren song of Starbucks
The 12 most-read Future Perfect articles of 2020