The more money you make, the more fast food you eat 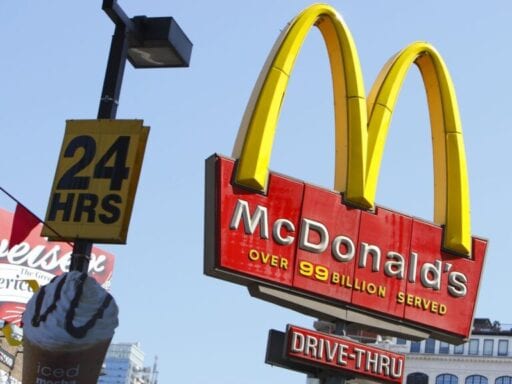 A new CDC brief suggests it’s not people below the poverty line doing the buying — it’s people well above it.

The stereotype is that poor people eat more fast food than rich people, who virtuously eat only organic salads and cows with names.

One problem with this assumption: It isn’t true. According to a new report about American fast food consumption from the Centers for Disease Control, people actually eat more fast food as their income levels go up.

The brief is based on data from the National Health and Nutrition Examination Survey (NHANES), which uses a combination of interviews and physical examinations to assess the state of American health. Of the roughly 10,000 adults surveyed, just over a third eat some kind of fast food — meaning something they classified as “restaurant fast food/pizza” — on any given day.

But when you break it down by income level, there’s a clear trend. The New York Times spells it out:

The percentage of adults who ate fast food rose with increasing income. About 32 percent of people who earn less than 130 percent of the federal poverty line — $32,630 a year for a family of four — ate fast food daily.

This isn’t the first study suggesting that while, yes, people living in poorer neighborhoods do tend to have more exposure to fast food than people living in more expensive areas — and that isn’t an accident — they aren’t actually eating more of it.

Last year, a study from economists Jay Zagorsky and Patricia K. Smith looking at the fast-food habits of Americans in their 40s and 50s found that lower-income people were less likely to regularly eat fast food than middle-class people, although in that study, they did consume slightly more fast food than people in top income brackets. But even then, the difference was pretty small.

So if it’s not lack of money, what does drive fast-food consumption? Maybe lack of time. Zagorsky and Smith found that the more hours a person worked, the more likely they were to eat fast food, Slate reported at the time. This makes sense: The thing about fast food is that it is fast.

For its part, the CDC doesn’t speculate about the reasons people might be eating “restaurant fast food/pizza,” but they do provide some other data:

People aged 20–39 were the most likely age bracket to eat fast food on any given day. It doesn’t seem like a total coincidence that that’s almost exactly the same demographic that makes up the largest share of the US labor force.

And that fast food is most likely to be consumed for lunch. Is that because of ever-shortening American lunch breaks? Is it because Americans are working more hours for stagnant wages? The CDC doesn’t say. But we do know that it slightly beats dinner as the most likely fast-food “eating occasion.”

There are, of course, a lot of oft-cited reasons poor people might eat more fast food, if in fact they did: It’s cheap and calorie dense; it doesn’t require time spent cooking; it’s a rare affordable indulgence; it can be easier to access than fresher foods. And all those things are true.

Another thing that is true, based on the CDC data? None of that is driving low-income people to eat any more fast food than anyone else.

“It just went away”: Trump used his son’s positive Covid-19 test to downplay the pandemic
Juneteenth should remind America what it owes black citizens
Tulsi Gabbard just won a delegate. Will she be in the next debate?
The $120-billion reason we can’t expect Facebook to police itself
What a second Trump term could mean for LGBTQ people
Why are so many brands pivoting to coziness?