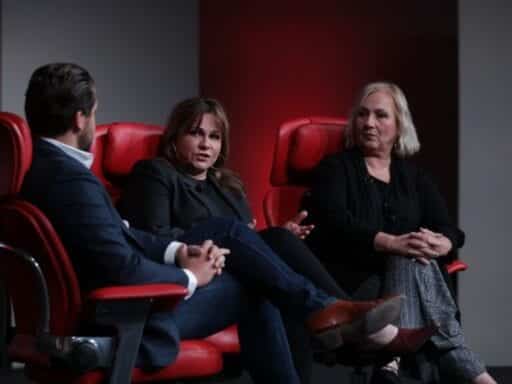 Some negative reviewers may have made up their minds before watching the show, executive producers Mimi Leder and Kerry Ehrin said onstage at Code Media in Los Angeles.

Being the flagship show of Apple’s new original TV content platform, Apple TV+, comes with a lot of attention — and some serious haters, according to its showrunners.

The Morning Show, which debuted on Apple TV+, is a series about a morning news TV show set in the Me Too era. The producers of the show, Mimi Leder and Kerry Ehrin, talked onstage at Recode’s Code Media conference about the challenges of launching a high-profile show on a new service, and some of the mixed critical reviews it’s received.

“When those reviews came in, I didn’t know what show they were watching. And I just kind of thought they were nuts,” said Leder, director and executive producer of the show, who is known for her previous work on shows like ER and The West Wing. “I just felt there were a lot of Apple haters and wanting Apple to fail.”

For The Morning Show, some of the negative press started before the show even aired as disputed reports came out about the reported cost of the show and its shifting focus in light of real-world sexual harassment allegations against former Today host Matt Lauer.

The duo also spoke to NBC’s Dylan Byers about the daunting task of feeling like the fate of a tech giant’s brand-new project is in your hands.

“There are certain weak moments where I’m like, ‘How did I get responsible for this?’” said Ehren. “It’s slightly intimidating. I try not to think about it too much.”

On the positive side, the showrunners said that Apple has given them more creative freedom than they’ve ever had before. Ehren, an award-winning former producer for hit shows like The Wonder Years and Friday Night Lights, said she tries not to worry about the reviews and ratings too much, as it can distract from her craft.

“We’re focused on the story we’re telling, the characters. We’re inside of it. So when you see reviews that are looking at it from the whole business aspect, like, ‘What is Apple doing?’ and, ‘They spent this much money on it’ — it’s kind of separate from us.”

What the heck is going on with TikTok and Oracle, explained
Meet the 2020 grads entering the bleakest economy in decades
America’s plan to save small business in the pandemic was flawed from the start
Donald Trump is inciting violence
Netflix’s Tigertail, from Master of None co-creator Alan Yang, is a wistful story about lost time
One of Barrett’s first cases asks if religion is a license to discriminate against LGBTQ people