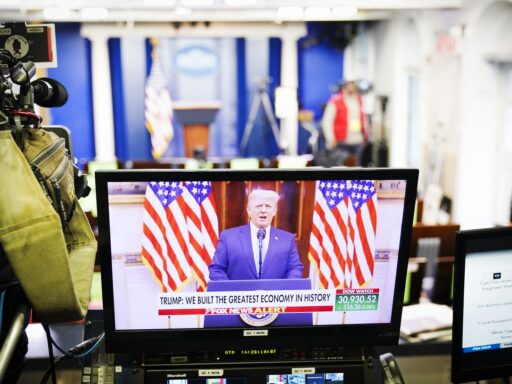 Trump’s presidency was a disaster. You wouldn’t know it from his last speech before leaving office.

The strangest thing about Donald Trump’s farewell address is how normal it sounds.

Four years after his presidency began with a declaration of war on reality itself, Trump’s last speech as president represented one final attempt to rewrite history.

“To serve as your president has been an honor beyond description,” Trump said in a taped 20-minute address posted to YouTube on Tuesday. “Thank you for this extraordinary privilege. And that’s what it is — a great privilege and a great honor.”

Listening to the taped speech, you might miss how not normal this presidency has been, right up until Trump’s last day in office. A militarized “Green Zone” in downtown Washington, DC, is still being set up to protect against the possibility of further violence by Trump supporters on Inauguration Day. Only about 1,000 guests can attend the event because of an out-of-control pandemic that has killed 400,000 Americans and left millions in economic uncertainty.

His acknowledgement of these facts barely registered.

On the assault on the Capitol, Trump said: “All Americans were horrified by the assault on our Capitol. Political violence is an attack on everything we cherish as Americans. It can never be tolerated.”

You wouldn’t know that Trump himself egged on the violence in multiple respects, including by delivering a speech just before the mob headed toward the Capitol — in which he said the words “fight” or “fighting” more than 20 times — as well as by posting tweets attacking Vice President Mike Pence and defending rioters while they ransacked the building.

On the pandemic, Trump spent less time on the Americans who lost their lives than congratulating his administration for supporting freeing up funds to incentivize the work of scientists who created vaccines: “Another administration would have taken three, four, five, maybe even up to 10 years to develop a vaccine. We did in nine months.”

Trump framed his record on Covid-19 around the success of the stock market. “The whole world suffered, but America outperformed other countries economically because of our incredible economy and the economy that we built. Without the foundations and footings, it wouldn’t have worked out this way. We wouldn’t have some of the best numbers we’ve ever had.”

For those who died of Covid-19, Trump offered just one line: “We grieve for every life lost, and we pledge in their memory to wipe out this horrible pandemic once and for all.”

The majority of the speech consisted of Trump boasting about his accomplishments. At times, he did so in characteristically misleading ways — for instance, bragging about how he presided over declining unemployment rates, but neglecting to mention that when the downturn caused by the pandemic is accounted for, unemployment actually increased by 40 percent under his watch. He did mention things he can legitimately take credit for, such as criminal justice reform legislation.

At the end, Trump claims that he’s leaving office “with a loyal and joyful heart” and “optimistic spirit.” Recent reporting suggests otherwise, that he’s been moping around the White House since his attempts to overturn his election loss ended with the riot fiasco and prompted his banishment from his beloved social media platforms.

“Now, as I prepare to hand power over to a new administration at noon on Wednesday, I want you to know that the movement we started is only just beginning,” he said, in comments that come as close as he ever will to conceding, though at no point did he mention Biden by name.

Watch the whole thing for yourself:

Trump’s speech represented a departure from the conspiratorial tones he’s been striking since his election loss. Unsurprisingly, QAnon adherents quickly concluded their leader was sending them coded messages.

Trump can literally look in a camera and say “bye bye” and there are still members of the QAnon community that will not hear it pic.twitter.com/m7GXnJqGyF

But a sober interpretation of Trump’s speech makes clear there will be no martial law. He will leave office tomorrow not because he respects democratic traditions or belatedly acknowledges the reality that Biden beat him fair and square, but because he has no choice. And his attempt to take a victory lap rings hollow when viewed against the backdrop of the interlocking crises he actively made worse, and that now fall to President-elect Biden to address.

Plastic bags were finally being banned. Then came the pandemic.
Read the full text of Trump’s Oval Office address on the coronavirus
The case against smart baby tech
Xbox and Playstation manipulate their marketplaces — and customers — just like Google, Amazon, and A...
The techlash isn’t big enough to stop Facebook from selling video chat devices for your living room
Women are taking to the streets against Trump’s Supreme Court pick