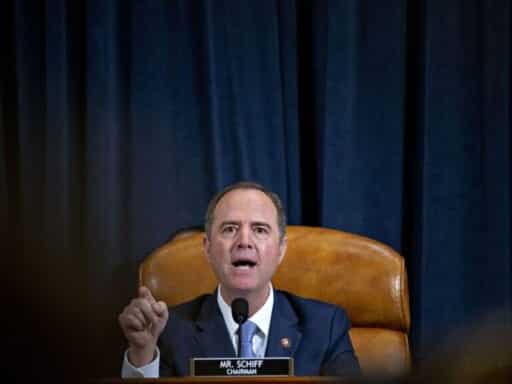 This sentence is really all you need to know — and it’s arguably the most important sentence in the impeachment saga so far.

The House Intelligence Committee just released a 300-page report with the conclusions from its impeachment inquiry into President Donald Trump’s actions involving Ukraine.

But all you really need to read is this one sentence from the report, which encapsulates all of its major findings: “[T]he impeachment inquiry has found that President Trump, personally and acting through agents within and outside of the U.S. government, solicited the interference of a foreign government, Ukraine, to benefit his reelection.”

That’s it and that’s all.

The committee spent weeks hearing public testimony from 12 witnesses and conducting 17 closed-door depositions, all to understand if Trump purposely withheld about $400 million in military aid to Ukraine and a White House meeting with President Volodymyr Zelensky in order to pressure Ukraine to open investigations into Democrats and Joe Biden’s family. Those interviews formed the backbone of the House Democrat-led impeachment inquiry that the House Judiciary Committee takes over this week.

And what they found is simple and damning: Trump and people around him — including his personal lawyer, Rudy Giuliani, as well as top officials such as US Ambassador to the EU Gordon Sondland — worked to put pressure on Kyiv to announce it was opening those new investigations as a way to hurt Biden ahead of the 2020 election.

The intelligence panel stopped short of recommending Trump’s impeachment, leaving that decision to the House Judiciary Committee. But as a document it’s quite compelling, and leaves almost no wiggle room for Democrats to break ranks. Republicans surely will defend the president regardless, using defenses from the White House as a guide.

But whenever anyone says the president did nothing wrong, remember that one sentence from the report. It’s really all you need to know — and it’s arguably the most important sentence in the impeachment saga so far.

Returning stuff you bought online is about to get easier
A list of everyone who’s been sent a pipe bomb so far — that we know of
This week in TikTok: Halloween is still happening ... online
Watch Mike Pence pack 2 big lies about the environment into a single 20-second clip
The new Covid-19 case surge in Europe, explained
Ed Whelan’s tweets have created a second Kavanaugh scandal