The most important part of the Democrats’ impeachment resolution 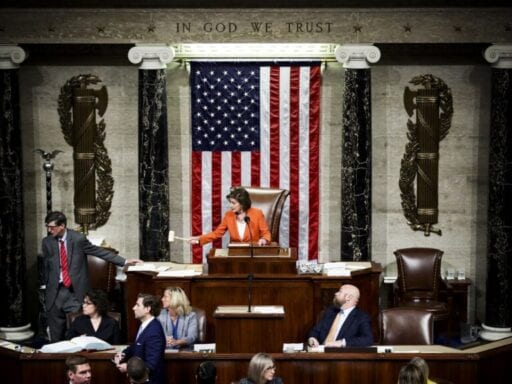 Share
Loading...
Speaker of the House Nancy Pelosi gavels the close of a vote by the House of Representatives on a resolution formalizing the impeachment inquiry on October 31, 2019. | Win McNamee/Getty Images

The Mueller hearing was a debacle for Democrats. The new impeachment rules show that they’ve learned their lesson.

Much of the resolution is symbolic. Neither the Constitution nor any House rule requires the full House to hold a vote on impeachment before the final vote on whether to impeach Trump. Other parts of the resolution resolve questions about who has the power to do what during the public phase of the inquiry. The House Intelligence Committee will hold public hearings and Republicans will need approval from at least some Democrats to call witnesses or to otherwise issue subpoenas.

The most significant provision in the resolution exempts the Intelligence Committee’s impeachment hearings from a rule that ordinarily limits questioning of witnesses to five minutes per committee member. Though the resolution leaves the five-minute rule in place for most members, it allows Intelligence Chair Adam Schiff to extend his own question time to as much as 45 minutes, so long as he gives equal time to Republican Ranking Member Devin Nunes.

These are important changes because they will allow Schiff and the team of lawyers working for him to focus their time on the impeachment hearings and to spend significant amounts of time asking probing questions during those hearings. The new rules help ensure that the hearing will not be a disjointed process, constantly jumping from one questioner to the next, without giving anyone time to build a coherent narrative.

The resolution provides that “the chair may confer recognition for multiple periods of such questioning,” so Schiff could potentially spend an indefinite amount of time questioning witnesses if circumstances warrant such an extension.

And, in what could prove to be an especially consequential aspect of this provision, Schiff and Nunes may also delegate their questioning time to “a Permanent Select Committee employee.” That means that professional counsel, who have both the skill set to conduct an effective interrogation and the ability to devote all their time to preparing for hearings, will be able to question witnesses.

These inquiry-specific rules appear to be an acknowledgement that the House’s ordinary rules for committee hearings, which often turn hearings into feasts of grandstanding, are inadequate to the awesome task of impeaching a president.

As I wrote in a piece recommending similar reforms, ordinary congressional hearings showcase “unprepared members of Congress” who are “often racing from a fundraiser or a meeting with a lobbyist” when they show up at a hearing and who are able to do little more than “read staff-prepared questions with little time to follow up.”

The new impeachment inquiry rules, at the very least, help ensure that Democrats can make their best case against President Trump. Whether that will be enough to convince a critical mass of the American people to turn against him remains to be seen. But House Democrats appear determined to avoid a situation where bad processes sabotage the hearings.

It is very easy to sabotage an ordinary congressional hearing

In the typical hearing, members of Congress each spend five minutes — and only five minutes — questioning a witness or panel of witnesses. Question time ordinarily alternates between Democrats and Republicans.

This process generates a number of easily foreseeable problems. It is inevitable that some members will be more effective questioners than others, but the five-minute rule allows witnesses to filibuster particularly effective questioners until that member’s time runs out. The five-minute rule also means that members do not have enough time to conduct deep, probing inquiries or to ask a long series of follow-up questions that could uncover answers a witness would rather keep hidden.

The fact that question time typically alternates between partisans, moreover, means that the minority can disrupt an effective line of questioning by shifting the topic to irrelevant accusations or outright conspiracy theories. A July hearing featuring former Special Counsel Robert Mueller was a disaster for Democrats for many reasons, but one reason was that it is hard to keep focus on a serious line of inquiry when that inquiry is constantly being interrupted by members ranting about Russian false flags or submitting pieces they wrote for Fox News host Sean Hannity’s website into the record.

Even when members act in good faith, not all members of Congress know how to conduct an effective interrogation. And even Democratic members of Congress sometimes have selfish interests that do not align with the goals of their party. A member from a highly Democratic state who is seeking higher office, for example, may spend their question time ranting against Trump in the hope that their rant will make the local news back home.

And then there’s the tyranny of time. Members of Congress spend ludicrous amounts of time raising money — former Rep. Steve Israel (D-NY) once estimated that, in less than 16 years in Congress, he “spent roughly 4,200 hours in call time, attended more than 1,600 fund-raisers just for my own campaign and raised nearly $20 million in increments of $1,000, $2,500 and $5,000 per election cycle.”

When they’re not raising money, members still need to keep abreast of all the issues that come before them as national legislators. They must meet with constituents and lobbyists, some of whom actually provide useful information or represent worthwhile interest groups. And they must travel back and forth between Washington and their district. A lawmaker from a western state may spend as much as 12 hours a week in airports and on airplanes while Congress is in session.

The new impeachment rules provide a way out of these traps. They will allow Schiff and his team of lawyers to focus their time on the impeachment hearings and free other members to do the other parts of their jobs. They won’t prevent Republicans from asking questions in bad faith, but they will allow Schiff or a lawyer for the committee to spend extended periods of time asking serious questions.

In effect, the new rules may bifurcate the hearings between the extended question time enjoyed by Schiff and Nunes and the more limited question time devoted to other members. And the latter part of the hearings could prove just as unenlightening as any other Congressional hearing.

But it’s probably not possible to remove spectacle and incompetence entirely from a congressional hearing. What the new rules accomplish is that they allow Schiff and his legal team to have long periods of questioning that cannot be seized by either bad-faith actors or by members who simply don’t know what they are doing.

And that gives the Democrats a much better chance of making their case against Trump than if they followed the ordinary rules.

Senate Republicans were laser-focused on confirming judges in 2019 — even the unqualified ones
The global risk of “vaccine nationalism”
Trump’s explanation for replacing the intel director with a loyalist doesn’t make sense
How The Vanishing Half fits into our cultural fixation with racial passing stories
Jay Inslee, exiting the presidential race, reflects on his campaign
LGBTQ immigrants are waiting on another possibly life-changing decision from the Supreme Court