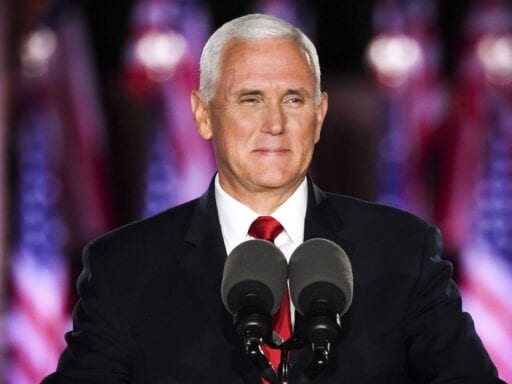 Across all three nights of the Republican National Convention so far, speakers returned to a single theme: In American cities, at least according to these speakers, protesters hostile to the police are rioting and crime is skyrocketing — and if Democratic presidential nominee Joe Biden is elected, this will be the future.

As Vice President Mike Pence put it during his keynote speech on Wednesday, “in the midst of this global pandemic … we’ve seen violence and chaos in the streets of our major cities.”

Pence’s speech highlighted a single law enforcement officer, strongly implying that this officer was the victim of left-wing radicals opposed to police officers and to President Trump: “Dave Patrick Underwood was an officer of the Department of Homeland Security’s Federal Protective Service, who was shot and killed during the riots in Oakland, California,” said Pence, before acknowledging Underwood’s sister, who was in the audience.

Underwood’s death is tragic, but it has nothing to do with left-wing radicals.

Underwood was killed just blocks away from anti-police violence protests in Oakland, but federal authorities say he was killed by Steven Carrillo, an Air Force staff sergeant and a follower of the “boogaloo boys,” a right-wing extremist movement that, according to the Washington Post’s Katie Shepherd, “has sought to use peaceful protests against police brutality to spread fringe views and ignite a race war.”

Carrillo was taken into federal custody, and he faces murder charges.

The “boogaloo” movement, which emerged on the website 4chan, is a bizarre mix of in-jokes, conservative gun culture, and Civil War nostalgia. It derives its name from the 1984 breakdancing film Breakin’ 2: Electric Boogaloo, a film that is sometimes used as a sarcastic shorthand for an unnecessary sequel. The idea is that the Boogaloo movement hopes to bring about a sequel to the Civil War.

As Vox’s Jane Coaston writes, the movement is “a loosely connected anti-government movement that has included some white nationalists who believe in an ‘accelerationist’ ideology that encourages spurring civil disorder to eventually foment the breakdown of the political system entirely.”

This right-wing extremist movement is emphatically not associated with Biden, the Democratic Party, Black Lives Matter, or any left-leaning protest movement seeking to prevent police violence. Underwood’s death, as far as we know, is related to left-leaning protest movements only to the extent that the Boogaloo boys hope to exploit protests and advance goals that those protesters would likely find repugnant.

And yet, to Mike Pence, Underwood’s death was just an opportunity to pin violence on his political opponents — regardless of whether the attack has any real basis in fact.