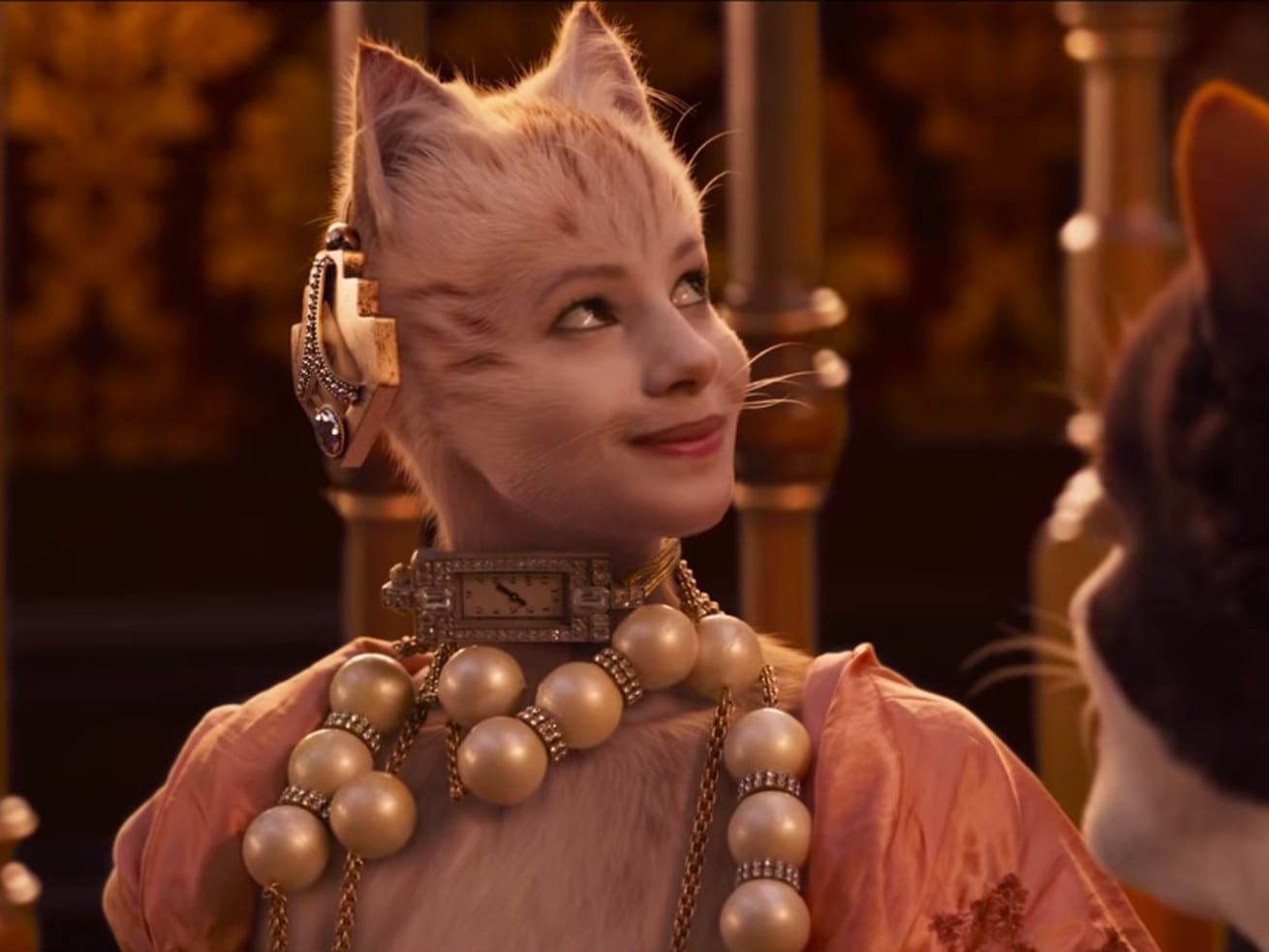 Cats is a case study in how not to adapt a musical.

In an alternate universe, the new movie adaptation of Cats, the long-running Andrew Lloyd Webber dance musical about cats, could have been a glorious holiday gift to the world. I’ve written a lot this year about how weird Cats is, and believe me, Cats, a story in which lots of cats introduce themselves and then one of them goes to cat heaven, is inherently weird. But there’s a vibrant, fun spark that runs through the musical’s threadbare plot — after all, it’s based on a book of children’s poems by T.S. Eliot — and despite the public’s generally baffled reaction to this movie’s existence, Cats had the potential to be joyous and light.

But it also had the potential to be a giant embarrassment, and I was wary that Cats wouldn’t be able to overcome either its own inherent quirkiness or the penchant of its director, Tom Hooper, to obliterate any emotional ebb and flow in his films and ratchet the pathos up to 11 at all times. His previous musical adaptation, 2012’s Les Misérables, was Oscar-nominated but also critically lambasted thanks to Hooper’s frequent misuse of fundamental filmmaking techniques, like close-ups and camera angles. As a fan of the stage musical’s mix of spectacle and compelling human drama, I also felt like he obliterated most of the musical’s emotional and scenic appeal.

So I was not optimistic. But I found it promising that Hooper was already a big Cats fan; plus, he had the assistance of Hamilton choreographer Andy Blankenbuehler, who also choreographed the recent Cats revival on Broadway, as well as Lloyd Webber himself. Maybe this would all go well.

Friends, it did not go well.

Some elements of Cats almost work. The set looks terrific, even though the scale is nonsensically inconsistent. The dancing is wonderful — when the camera manages to sit still long enough to showcase it. The music is essentially unchanged, and I happen to like the new song. It’s got its share of tongue-in-cheek levity, my particular favorite being the moment Judi Dench’s Old Deuteronomy solemnly instructs us, the audience, to address our cats thusly: “O, Cat.” One musical sequence in particular came really close, for me, to capturing Cats’ effervescent whimsy.

But Hooper makes baffling directorial decisions at every turn. His staging misses key opportunities to bring the onscreen action in line with our expectations and especially with the music. This is a crucial point of objection, because Cats is primarily about the music and not much else. But Hooper’s film far too frequently disconnects its audience from its musical score by making choices that undercut or distract from what the music is doing. And that contributes to the overall disjointed, confusing effect Cats leaves us with.

When the music of Cats is at its most happy and danceable, Cats the movie shows us lots of other stuff that is not a bunch of happy dancing cats

Embedded above is the discombobulating, jarring, trippy overture to Cats. There’s a lot of discordant synthesizer noise at first that builds up, rather brilliantly, I think, to the introduction of Cats’ main theme at 1:11 — the Jellicle cats theme. You can hear this very clearly in the orchestration: The single melody takes over from all the bombastic orchestral noise, the bottom drops out completely, and the only thing that’s left is this slinky, delightfully feline melody.

What do you picture in your mind when you hear these soaring notes, my fellow travelers? Do you see, maybe, a row of curious, dizzying, daring cats venturing forth beneath an expansive London night? Or, perhaps, a single solitary cat leaping into the frame with all of the joy and majesty and agility that only a cat — or a human pretending to be a cat — could bring to this kind of bobbing, weaving melodic line?

Or do you see the visceral thump of a cat’s helpless body as it bounces off an alley step after being abandoned by its owner?

Guess which option Tom “both feet in the bucket of cement” Hooper got excited about? If you prayed for the former, you are, sadly, wrong.

This is how Cats, the movie, opens — with a cat in a bag being physically abused in time to this music. What about this music screams “throw a cat down a bunch of steps at the climax,” Tom Hooper? Who hurt you?! A dramatic moment like this could have been an effective way to open the film, but instead it has a fundamentally discordant effect. Which emotion are we supposed to be experiencing? The one connected to what we’re seeing — a pet being brutally abandoned — or the one connected to what we’re hearing, which is a jaunty musical theme meant to convey the essence of a cat’s mystery and inscrutability?

Again and again, Hooper shoves stuff at us visually that has nothing to do with what we’re hearing. The staging seems to ignore the dictates of the music to an infuriating degree; the camera often zooms in and out for inexplicable reasons and follows cats around the edges of the looming set while other stuff fills the background. It’s difficult to get a handle, visually, on where we’re supposed to be focused.

This spatial confusion meant that there were several times in which the film suddenly introduces us to major characters, only to be met with laughter by the audience at my screening. In a stage musical, character entrances should always be seeded dramatically with proper blocking, lighting, and musical cues — something a film can and should approximate, instead of just randomly cutting to someone we’ve never seen before. When something as simple as a character entrance is met with ridicule for being so abrupt and inexplicable, there is a serious, intrinsic problem with your movie musical.

Throughout this unfocused staging, the ensemble dancing that would ideally take precedent — you know, the thing you’re here to see, dancing cats — is frequently happening way off in the background. It’s maddening! In the 2016 Broadway revival, Blankenbuehler’s choreography made ample room for large ensemble numbers, which suggests this paucity of ensemble dancing lies squarely at Hooper’s feet. Particularly in the Jellicle Ball, which is supposed to be the big dancing cats scene, the majority of the number is now allotted to individual cats having random solo dance-offs. We don’t care about these individual dance-offs, though, because we know next to nothing about these individual cats. We just came for lots of cats dancing together! Give us lots of wide, full-body shots of rows of dancing cats, Tom Hooper! JUST GIVE US THE DANCING CATS!

You might not think it possible that Cats the musical could become more baffling, given the addition of new contextual material to its random and barely there plot. But you would be so, so wrong.

For instance: The movie starts with our abused and abandoned cat, Victoria (Francesca Hayward), being dumped on the street by her former owners and then immediately inducted into the ineffable world of Jellicle-ness. There’s not a moment’s pause between these events. She doesn’t even get a moment to be sad! It’s just thump-bounce-thump, welp, here’s your new life, kid. This isn’t just bad pacing, it’s a muddled delineation of exposition. The movie then goes one step further and dramatically presents the idea that Victoria needs to learn her own secret Jellicle name. It stands to reason that this development means Victoria’s narrative will end with her finding out what that name is. Nope! Never happens.

Then there’s the backstory for Grizabella, Jennifer Hudson’s once-glamorous dance cat who’s now, erm, a fallen cat prostitute. (I told you, Cats is weird.) The details regarding Grizabella’s journey from celebrated performer to sex worker have never been clear in any version — but in the film, they’re made even more bizarre. That’s because another cat, Macavity (Idris Elba), is now, somehow, her pimp and a catnip pusher. So instead of just having to accept cat sex workers, we have to accept an entire feline underground of sex and drug trafficking.

I could live with one or two of these things being presented as part of the ineffable mystery of Cats, with no resolution sought or needed. But when every scene presents us with a pile of these endless bafflements, it becomes a giant, inexplicable mess.

With considerably less literalism, more attention given to the spirit of Cats, plenty of wider camera angles allowing the dancing to be the main focus as it always should have been, and clearer direction, this could have been a sincere pleasure. Instead, Tom Hooper has created a clusterfuck that will spawn an instantly ironic, mocking cult following.

I know this version of Cats had this squandered potential somewhere in its feline soul because of the one moment that somehow manages, despite everything, to be absolutely charming. That number, of all things, is “Skimbleshanks the Railway Cat,” the random train song that features the world’s most extra time signature (13/8, my god!) and one of Cats’ most forgettable characters. But in the movie, there’s a minor miracle: After a killer tap-dance break from Skimbleshanks (Steven McRae), we’re treated to a glorious wide shot showing a line of cats dancing under the sky over the River Thames. And just like that, Cats suddenly becomes magical. It’s a glimpse of another movie altogether — one that treats its story like a poetic child’s dream of a cat’s life, as T.S. Eliot originally intended, instead of this film’s mostly heavy-handed, stone-cold, somber approach.

So here’s my compromise. I’m just going to pretend that Macavity, the drug-pushing magical pimp, snuck onto the set of Cats and steadily vanquished all the sequences of that other, better film to the far realm of Growltiger’s pirate ship. I’m going to pretend that Skimbleshanks was the only sequence from that other, better film that managed to escape and find its way to us. I will hold that other film-that-could-have-been close to my heart and hope this inferior, imposter version of Cats hasn’t soured us too badly on movie musicals.

And when people ask me if I liked Cats, I will clutch my teal-sequined Cats premiere headband and say: Look — a new day has begun.

Democrats are already at odds over how to win in 2022
Experts worry Trump revealed US secrets when he tweeted a photo of an Iranian launch site
Trump renews Space Force plan, but Congress lukewarm on plan it would have to approve
Trump’s video of coronavirus actions accidentally reveals how he mishandled things in February
Vox Sentences: Goodbye, Queen of Soul
Why Incredibles director Brad Bird gets compared to Ayn Rand — and why he shouldn’t be