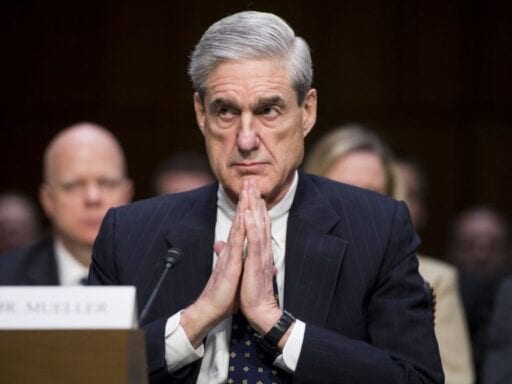 What the special counsel’s 448-page report reveals — and conceals.

Special counsel Robert Mueller’s 448-page report is a copiously detailed chronicle of shady conduct from Donald Trump and his associates, from the campaign through to the White House.

Mueller makes clear that his investigation did not establish that there was a conspiracy between Trump associates and the Russian government to interfere with the election. And the special counsel doesn’t say one way or the other whether he thinks President Trump criminally obstructed justice while in office — though he makes clear he thinks the evidence of that is quite concerning.

“If we had confidence after a thorough investigation of the facts that the President clearly did not commit obstruction of justice, we would so state,” Mueller writes. “We are unable to reach such a judgment.”

The report makes several things clear: that the Russian government tried to help Trump win, that the Trump campaign was eager to benefit from hackings targeting Democrats, that Trump’s campaign advisers had a host of ties to Russia, and that President Trump tried again and again to try to impede the Russia investigation.

For instance, Mueller writes that Trump “repeatedly” asked people associated with his campaign to “find” tens of thousands of emails Hillary Clinton had deleted, and that campaign adviser Michael Flynn embarked on an (unsuccessful) effort to do so. The special counsel also describes how Trump’s campaign manager Paul Manafort gave a Russian associate internal polling data and stressed a focus on Midwestern states. And the report’s volume on obstruction of justice lays out facts about Trump’s behavior on 11 different episodes, from FBI Director James Comey’s firing to his efforts to intimidate one-time Trump lawyer Michael Cohen.

Several loose ends remain. A good deal of material in the report is redacted — including, it seems, information about just what exactly happened regarding Roger Stone’s efforts to get information about hacked emails from WikiLeaks. Furthermore, an appendix to the report also lays out 14 redacted matters that are still being investigated (two that Mueller was handling, and 12 that he referred elsewhere).

But Trump’s criminal jeopardy from the Mueller probe itself is over. And some Democrats are throwing cold water on any impeachment push based on Mueller’s findings — “based on what we have seen to date, going forward on impeachment is not worthwhile at this point,” House Majority Leader Steny Hoyer told CNN Thursday.

Mueller’s Russian interference findings and his decision not to charge Trump associates with conspiracy, explained

The first volume of Mueller’s report focuses on the Russian effort to interfere with the 2016 presidential election, and whether any Trump associates were involved in that effort. This is popularly referred to as “collusion,” but Mueller writes that collusion is not a criminal term and he instead relied on conspiracy law. The volume begins by describing the two major Russian government efforts to interfere with the election.

First, there was the social media propaganda operation — the “troll farm,” in which Russia’s Internet Research Agency (funded by an oligarch known as “Putin’s chef”) created fake online accounts that “favored candidate Trump and disparaged candidate Clinton,” according to Mueller. The special counsel writes that his investigation has “not identified evidence that any Trump Campaign official” was knowingly involved in their efforts (Mueller indicted several Russian nationals and Russia-affiliated people and organizations in February 2018).

Second, there was what Mueller calls the “Russian hacking and dumping operations.” Russian intelligence officers hacked into the accounts of Clinton campaign and Democratic Party organizations. Some of that material was then posted online by the Russians themselves, while other material was eventually posted by WikiLeaks.

Mueller does not suggest any involvement from Trump officials in the hacking itself — but his findings about the leaks aren’t so clear. A section titled “Trump Campaign and the Dissemination of Hacked Materials” is heavily redacted, and appears to include information about Trump associates’ discussions about WikiLeaks. (Some of this redacted material likely relates to Trump campaign adviser Roger Stone, who faces an upcoming trial.)

This section also describes how, according to Michael Flynn, Trump repeatedly asked his campaign advisers to find Hillary Clinton’s deleted emails. (This referred to tens of thousands of emails Clinton deleted rather than hand over to the government, with the justification that they were personal rather than work-related.) Flynn in fact tried to “find” those emails, contacting an elderly Republican donor who tried to obtain them on the “dark web.” He did not succeed.

Beyond probing whether Trump associates were involved in those two main Russian interference operations, Mueller also investigated “links and contacts” between Trump associates and people with ties to Russia’s government.

Per Mueller, the idea was to look into “whether those contacts constituted a third avenue” of Russian influence, and into whether there was a conspiracy involving “Russia providing assistance to the campaign” in exchange for future “favorable treatment.”

This section of the report is more than 100 pages long and explores these, among other, topics:

In the end, though, Mueller concluded that none of these contacts added up to “an agreement to commit any substantive violation of federal criminal law.”

The special counsel also looked into whether Donald Jr.’s meeting the Russian lawyer violated campaign finance law, under the theory that it involved a request for a “thing of value” from a foreigner who’s not permitted to donate to a US political campaign. But Mueller concluded that the evidence he had, particularly regarding the parties’ intent to violate the law, wasn’t sufficient for a likely criminal conviction.

An important caveat Mueller makes is that when he writes that his investigation “did not establish particular facts,” that “does not mean that there was no evidence of those facts.” But in the end, his 22-month investigation spent a great deal of time and resources probing these matters — and despite all of the shady information they turned up, they didn’t end up clearly documenting a Trump-Russia election interference conspiracy.

The second volume of Mueller’s report is a detailed investigation of events that potentially implicate President Trump in obstruction of justice.

The special counsel writes that he “determined not to make a traditional prosecutorial judgment” on whether Trump committed criminal obstruction of justice. The main reason he did so was because the Justice Department has held that a sitting president can’t be indicted. “We determined not to apply an approach that could potentially result in a judgment that the President committed crimes,” he writes.

Oddly, though, Mueller also goes out of his way to point out that he does not have “confidence” that Trump did not obstruct justice — and claims that, if Trump indeed “clearly did not commit obstruction of justice,” he would say so. The implication is that the evidence against Trump on obstruction shouldn’t be dismissed lightly (even though Attorney General Bill Barr did end dismissing it rather lightly).

The key obstruction-related events Mueller collected facts and evidence on are:

Much of this seems to be clearly aimed at trying to impede the Russia investigation. And some of the details here are very juicy indeed. For instance, an administration official’s notes describe Trump’s reaction upon learning of Mueller’s appointment: “Oh my God. This is terrible. This is the end of my Presidency. I’m fucked.” After that, Trump spoke to his advisers about “knocking out Mueller” and tried — unsuccessfully — to have Jeff Sessions rein in the Russia investigation.

We also learned that, when Flynn moved toward cooperating with the government, Trump’s lawyer told Flynn’s attorney that he interpreted this as an expression of hostility toward the president and that he planned to make Trump aware of it. And that after Paul Manafort and Rick Gates were indicted, Manafort told Gates that it would be stupid to strike a plea deal, since Trump’s lawyer had made clear they’d “be taken care of.”

Mueller writes that the evidence doesn’t establish that all this “was designed to cover up a conspiracy between the Trump campaign and Russia” — but that Trump could well have had other corrupt motives. For instance, regarding Trump’s firing of Comey, Mueller writes:

“The president had a motive to put the FBI’s Russia investigation behind him… a thorough FBI investigation would uncover facts about the campaign and the President personally that the President could have understood to be crimes or that would give rise to personal and political concerns.”

For many of these potentially obstructive incidents, Mueller includes some analysis of what the evidence shows about the three requirements for whether something can be considered criminal obstruction of justice — whether it involves an obstructive act, whether it has a connection to a pending proceeding, and what Trump’s intent was.

But, throughout, Mueller avoids coming to a conclusion on whether any of these individual acts — or the combination of them — qualify as criminal obstruction of justice. He does, however, occasionally to allude that another federal government body can address the matter: “We concluded that Congress has authority to prohibit a President’s corrupt use of his authority in order to protect the integrity of the administration of justice.”

And toward the end of the document, the special counsel writes: “The protection of the criminal justice system from corrupt acts by any person — including the President — accords with the fundamental principle of our government that ‘[n]o [person] in this country is so high that he is above the law.’”

The New York Times is the latest news outlet to end its Spanish-language coverage
21 kids sued the government over climate change. A federal court dismissed the case.
“They should have reacted faster”: 6 Covid-19 survivor stories from around the world
RuPaul’s Drag Race contestant Sherry Pie is disqualified after admitting to sexual misconduct
The false promise of “renewable natural gas”
Teen Titans GO! to the Movies is a candy-colored cure for superhero-movie fatigue