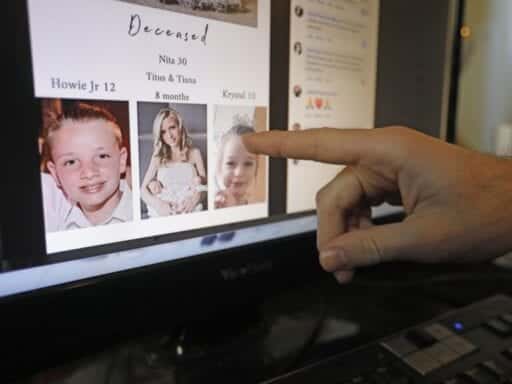 Share
Loading...
Austin Cloes points to a photo of relatives Rhonita Miller and her family, who were killed in Mexico, on a computer screen November 5, 2019, in Herriman, Utah. | Rick Bowmer/AP

At least three women and six children were killed in an ambush on Monday.

At least three women and six children were murdered when gunmen attacked a Mormon family on Monday as they were traveling in northern Mexico.

The victims were extended members of the LeBarón family, part of a Mormon community that settled in Mexico from the US, and where many hold dual US-Mexico citizenship. The brutal killings come as Mexico’s government has struggled to contain the extreme violence tied to drug cartels, which has claimed tens of thousands of lives so far this year.

The ambush occurred in northern Mexico, where group of women were driving their children in three separate vehicles from Sonora state to a Mormon community called La Mora in the neighboring state of Chihuahua. According to NPR, Kendra Miller, a cousin to some of the victims said that at least one of the women was driving to the United States to pick up her husband from the Phoenix airport; he worked in North Dakota and the two were planning on celebrating a wedding anniversary.

Exactly how the attack unfolded is still a bit unclear, and much of the details have come from what family members have told the media or posted online. Authorities are have not yet determined whether it was a targeted attack — the family had been singled out by cartels in the past — or potentially a case of mistaken identity.

Alfonso Durazo, Mexico’s security minister, said at a press conference Tuesday that two cartels had been warring in the area, and it’s possible the convoy of vehicles was mistaken for one of the groups.

That does little to detract from the apparent brazenness of the attack. According to reports, one vehicle, driven by Maria Rhonita Miller, either got a flat tire or broke down, and the other vehicles turned back to get assistance. Assailants opened fire on the driver, and set the car on fire, killing the woman and her four children (including two twins under a year old), another cousin of the victims, Julian LeBarón, told the New York Times.

Relatives posted a photo online of a burned-out and charred vehicle riddled with bullet holes.

The two other vehicles were found along the side of the road, about eight to ten miles away. The two drivers, both adult women, were found dead, along with two other children. The adult victims are believed to be Christina Marie Langford Johnson and Dawna Ray Langford. Dawna’s two children, an 11-year-old and a 3-year-old, were also killed.

Several children survived. The US ambassador to Mexico, Christopher Landau, said Tuesday that five children were injured. According to relatives, some of the surviving kids ran from the vehicles and hid, escaping the ambush. Of the children who were injured, one was reportedly shot in the face. A seven-month-old infant, believed to be the daughter of Christina Marie Langford Johnson also survived unharmed, reports the Wall Street Journal.

There’s still a lot that’s unclear about this attack, including why or how these women and children were attacked. The victims are descendants of Mormon settlers that came to the region after breaking with the Utah-based Church of Jesus Christ of Latter-day Saints decades ago over the issue of polygamy, though it’s no longer practiced.

But the victims of the killings in Mexico still have deep ties to the US, and all are believed to be US citizens. Sen. Kevin Cramer (R-ND) said Tuesday, in expressing his sorrow for the tragedy, “that members of the LeBaron family live and work in the oil fields of North Dakota and we feel a deep sense of loss.” (There’s also a connection to the Romneys.)

It is also not the first time the family has been caught up in Mexico’s violent drug war. In the past, the family has been the victim of extortion and kidnapping attempts by gangs in the past. They’ve also been vocal critics of the Mexican government for its failures in fighting organized crime.

In 2009, Benjamin LeBarón, then 31, was abducted and shot multiple times by masked men. LeBaron had previously refused to pay a ransom for his 16-year-old brother, who was kidnapped (and later released). He became a vocal anti-crime advocate, founding a community group so citizens could arm and defend themselves. The family has continued to advocate for changes to Mexico’s gun laws.

The killings immediately drew condemnation from authorities in Mexico and the United States. President Donald Trump lamented the attack on Twitter, and offered his assistance to Mexican authorities.

“A wonderful family and friends from Utah got caught between two vicious drug cartels, who were shooting at each other, with the result being many great American people killed, including young children, and some missing,” Trump wrote. If Mexico needs or requests help in cleaning out these … monsters, the United States stands ready, willing & able to get involved and do the job quickly and effectively.”

….monsters, the United States stands ready, willing & able to get involved and do the job quickly and effectively. The great new President of Mexico has made this a big issue, but the cartels have become so large and powerful that you sometimes need an army to defeat an army!

Trump followed up saying that he was ready to “wage WAR on the drug cartels and wipe them off the face of the earth” with Mexico’s help.

Mexican President Andrés Manuel López Obrador (better known by his initials, AMLO) called the deaths a “regrettable situation” on Tuesday. At a press conference, he said he had spoken to Trump and thanked him for the support, but that Mexico would act with “independence and sovereignty.”

It’s not all that surprising AMLO rejected Trump’s war rhetoric. AMLO, a leftist politician, came to power last year as violence was spiking in Mexico, an indication that the harsh “war on drugs” policies of his predecessors failed. President Enrique Peña Nieto, and Felipe Calderon before him, waged an all-out offensive against the cartels and tried to take out the leaders of those organized gangs (like the notorious Joaquín “El Chapo” Guzmán), which didn’t stop them so much as fracture them into smaller, but fiercer networks. In this effort, the Mexican government got a lot of help and financial assistance from the United States.

AMLO promised a completely different approach — “abrazos, no balazos,” or “hugs, not guns.” Essentially, AMLO wanted to focus on the root causes of violence, by offering scholarships, job training, and drug treatment programs. He also created a national guard force, a hybrid of police and military officers, to combat crime and violence. But the new force has been slow to recruit and train new officers and hasn’t done much to actually slow Mexico’s deteriorating security situation. In fact, it’s mostly been used to track down Central American migrants crossing the border into Mexico.

Even supporters of AMLO’s approach recognize that social programs won’t work to ameliorate the immediate crisis of violence in the country — or dismantle the entrenched organized crime networks that are perpetrating the bloodshed.

October was a particularly bloody month. In Culiacán, Mexican soldiers botched the capture of the son of “El Chapo” — the former Sinaloa cartel kingpin who was just convicted in the US — because they were outnumbered and under siege by cartel members.

The Mexican government ended up having to release El Chapo’s son, Ovidio Guzmán López, to stem the bloodshed, though at least 13 people still died in the fighting. It revealed just how ill-equipped Mexico’s forces are to confront the cartels, and showed just how much clout and firepower these illicit networks have. Though some praised the military’s decision for sparing a city from a potential massacre, the operation also seemed a repeat of the kingpin strategy — of taking out those cartel leaders — that has only intensified the violence in Mexico.

The bungled operation put AMLO’s strategy under scrutiny once again, especially as it seems the US was very interested in having El Chapo’s son extradited. The murder of nine women and children in broad daylight is likely to bring even more attention to Mexico’s failure to deal with violence.

The brazen killing of this family is sure to intensify that pressure. Mexico’s National Guard deployed to the area after the murders, according to the Times, but it’s far from a permanent solution to Mexico’s struggles.

A second Covid-19 vaccine has been recommended for emergency use by FDA advisers
Democrats want to turn Texas blue. It starts with the state House in 2020.
Jimmy Fallon thinks Donald Trump has more important things to do than make fun of him on Twitter
How a Chinese immigrant neighborhood is struggling amid coronavirus-related xenophobia
Republicans call for overturning Roe v. Wade in Supreme Court filing
Exclusive: Kamala Harris and Ayanna Pressley have a $125 billion plan to help the smallest businesse...