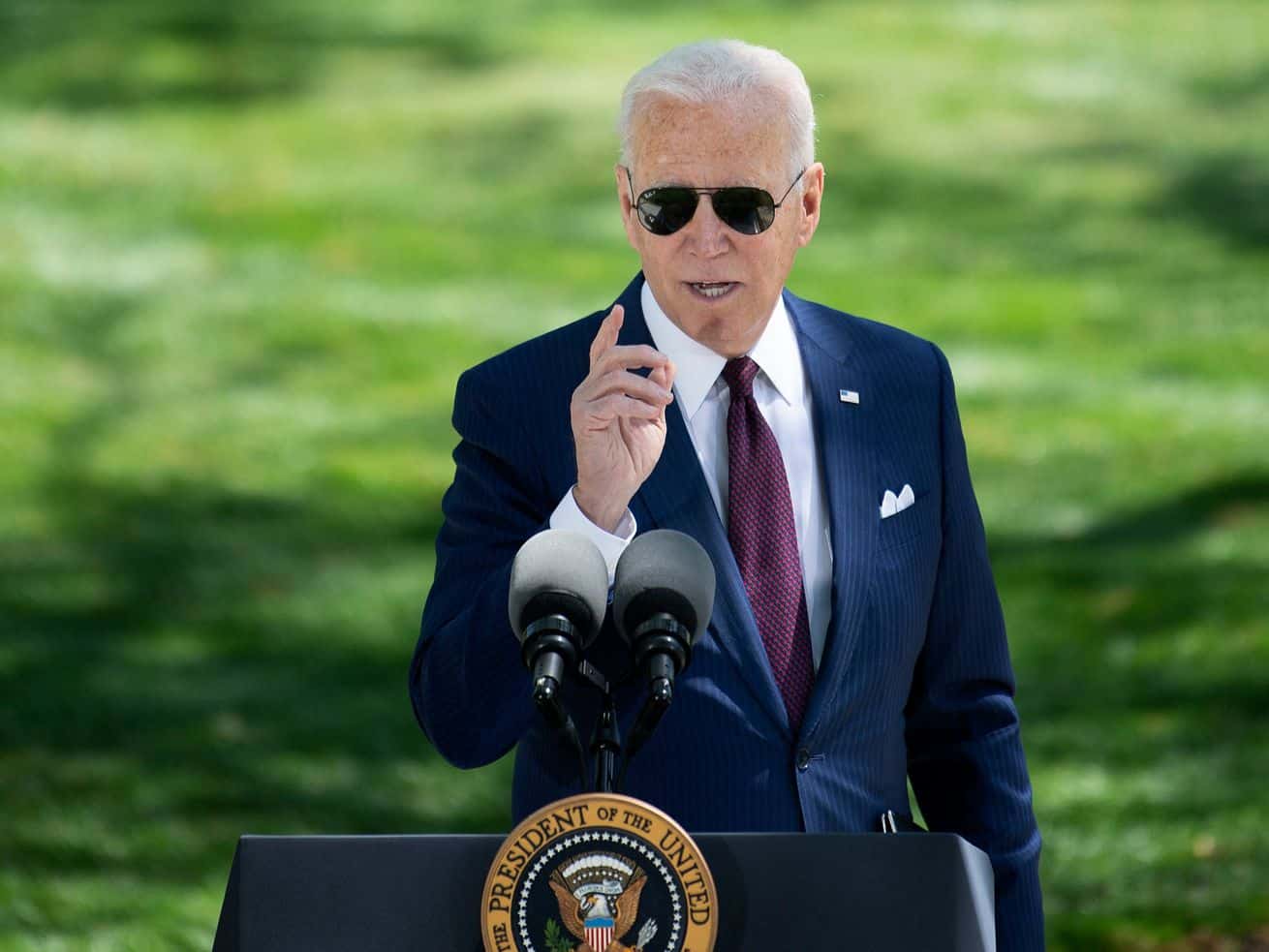 It’s a media construct that’s out of step with the modern presidency.

President Joe Biden’s 100th day in office is Thursday, April 29, and with that fairly arbitrary milestone comes media hype and “report card” articles from journalists and pundits assessing how the new president has been doing so far (a tradition I’ve indulged in in the past).

The 100 days concept is grounded in some history (Franklin D. Roosevelt was the first to use this framing to brag about his early New Deal accomplishments), and Biden himself scheduled his first major address to Congress to coincide with it. But this cutoff point doesn’t have any substantive consequence, and the focus on it seems to be out of step with the nature of the modern presidency.

The conventional wisdom about the importance of the 100 days goes something like this: When a new president takes office, he begins with a “honeymoon” period in which he’s quite popular. However, there’s a time limit on this as presidents tend to see an approval rating drop as they stay in office. Therefore, time is of the essence. The new president should rush to enact as much of his agenda as possible before the honeymoon ends because he’ll find it more difficult to do so afterward.

But there are a few problems with this analysis. First off, the presidential “honeymoon” approval boost is no longer so apparent in our age of polarization — Biden isn’t really getting one and Trump didn’t either. (Neither did George W. Bush, for that matter.)

Second, since FDR’s presidency, it has been quite rare for major legislation to get passed in the first 100 days. In times of crisis, both Biden and Obama managed to pass large stimulus bills quickly, but most other signature legislative accomplishments for presidents fell outside the 100-day window. The true deadline here is probably the 2022 midterm elections, which are still a way off.

Finally, when it comes to executive actions, there’s no real reason the president’s important accomplishments “have” to come during the first 100 days, and indeed, they’ve often historically come later. In part that’s because presidents tend to turn to executive power more once their hopes of scoring major legislative victories are frustrated.

So really, it’s silly to assess the president’s performance after so short a time. The only appropriate grade is “incomplete.”

The presidential honeymoon has been canceled

For most of the mid-to-late 20th century, there was a common pattern in the approval ratings of new presidents: They’d often start off very popular. Dwight D. Eisenhower, John F. Kennedy, Lyndon B. Johnson, and Jimmy Carter started off with approval ratings in the high 60s or low 70s. Others — Richard Nixon, Ronald Reagan, and George H.W. Bush — got smaller or later bounces. Still, the belief that a new president usually gets a honeymoon was well-grounded.

That has been changing, though. Only one of the past four presidents — Barack Obama — started out with an approval rating north of 60 percent, per FiveThirtyEight’s tracker. Donald Trump’s approval was in the 40s for his whole first 100 days, and George W. Bush (coming into office after the divisive, contested 2000 election) had approval ratings in the low-to-mid 50s.

Biden’s approval rating is about where George W. Bush’s was — it’s currently 54 percent. But, significantly, his disapproval rating at this point is higher than any other modern president’s except for Trump’s (though Bill Clinton’s was close around day 100). This likely reflects polarization — it’s just harder now for a new president to get the benefit of the doubt from the other side. (Indeed, the only 21st-century president to ever top 70 percent approval for a prolonged period was George W. Bush in the months after 9/11.)

It’s still possible that this will prove to be the high-water mark of Biden’s popularity — his approval rating has been stable, but his disapproval rating has risen about 5 points since he took office. But the broader point is that he did not start off with a special honeymoon that gave him widespread popularity.

The assumption that the first 100 days presents a unique opportunity to get things through Congress is also complicated by the reality that, in practice, major legislation takes longer.

The original 100 days concept, as framed by FDR, was specifically about major bills Congress had passed as a response to the crisis of the Great Depression. Helpfully, Democrats came in with massive congressional majorities (311 of 430 House seats and 58 of 96 Senate seats). And they did indeed manage to pass a flurry of major bills (though Roosevelt’s own role in dictating that agenda has been overstated).

In any case, FDR was an exception — no subsequent president has replicated anything like this in the 100-day period. Generally, what we’ve seen since is that the most a new president can expect before April is passing a big emergency spending bill, and perhaps some smaller bills. One reason for this is that a lot of the Senate’s time is chewed up confirming the president’s nominees, but it’s also that serious reforms inherently seem to take some time.

The signature economic and tax bills of Ronald Reagan, Bill Clinton, George W. Bush, and Donald Trump, for instance, didn’t become law until after the first 100 days had ended (May for Bush, August for Reagan and Clinton, December for Trump). Obama didn’t sign the Affordable Care Act until March 2010 (14 months after he took office). A 100-day count for Lyndon Johnson is complicated by his unexpected ascendancy to the presidency in November 1963, but the Civil Rights Act of 1964 took longer than 100 days after that, and most of his major Great Society bills didn’t pass until the summer and fall of 1965.

In contrast to FDR, Biden has the narrowest Senate majority possible, and a pretty narrow House majority too. He also has to deal with the routine use of the Senate filibuster, which means a 60-vote supermajority is required to advance almost all bills. He has the American Rescue Plan as a legislative accomplishment to his name, but as far as whether he’ll be able to pass anything broader, it’s too early to say.

When I took stock of Donald Trump’s first 100 days in office, I said he may have missed his “best chance to transform America,” arguing that his governing agenda lay in “tatters” because courts blocked his “Muslim ban” and the GOP’s effort to repeal Obamacare was foundering. More broadly, I pointed out that Trump had embraced Republican establishment policies on trade and foreign policy and had neglected to shake up partisan dynamics by backing infrastructure reform.

With hindsight, a lot of that holds up, but there were certain areas where Trump at least sort of learned from his mistakes. He crafted a more limited version of the travel ban that got the Supreme Court’s blessing in 2018. He eventually empowered economic advisers who were more willing to wage trade war. He ultimately set the US on a course for withdrawal of its troops from Afghanistan.

The common thread here is that these were policy changes Trump could enact through the executive branch. Indeed, though his administration generally continued to be a chaotic mess, he did get at least somewhat better at getting what he wanted from his appointees as his presidency went on.

Barack Obama also didn’t start really pushing the limits of policymaking by executive power until several years into his presidency. This was partly out of frustration with his inability to get priorities past the Republican House. But often, the flurry of executive actions a president announces at the start of his term are low-hanging fruit. More consequential actions require more deliberation — if they’re sloppily crafted, they can be thrown out by the courts — and often happen later.

When it comes to matters of war and peace, and foreign policy more generally, the timeline is even less predictable — George W. Bush’s first 100 days ended up being largely irrelevant to his legacy because his presidency was so shaped by his response to 9/11. Overall, though, there’s no 100th-day deadline on when the president can use his executive power, as he’ll have that authority for his whole term. So again, the only defensible “grade” for Biden right now is: incomplete.

How thousands of Iranians went from mourning a general to protesting the regime, in a week
Trump wants to change how poverty is calculated — to make fewer people eligible for benefits
Wray: FBI won't repeat errors noted in report
As Trump takes aim at affirmative action, let’s remember how Jared Kushner got into Harvard
The Great Barrington Declaration’s “herd immunity” strategy is a nightmare
How Joe Biden and Bernie Sanders joined forces to craft a bold, progressive agenda