The new details about Trump blocking aid to Ukraine, explained 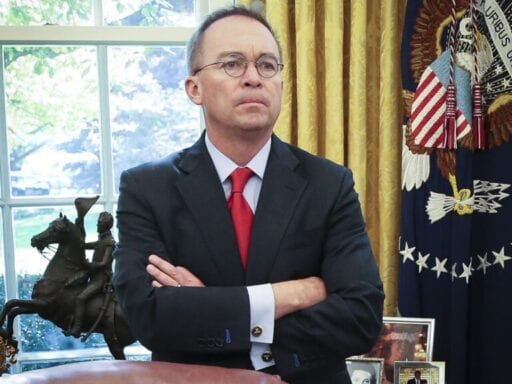 A deposition and a scoop revealed more information.

New details about President Donald Trump’s hold on military aid for Ukraine — a matter at the heart of the House impeachment inquiry — emerged on Tuesday, due to a newly released witness transcript and a New York Times scoop.

Mark Sandy was the sole official from the White House Office of Management and Budget — the office that implemented the hold — to testify behind closed doors to impeachment investigators. And Democrats released the transcript of that testimony Tuesday evening.

Sandy said that two OMB officials resigned at least in part due to concerns over the Ukraine aid hold. He also clarified the timeline of the hold, saying he first got questions about it in June, and that the decision had been made to implement it by mid-July. He also said that the key OMB official involved in the process was Michael Duffey — a political appointee and Republican operative who has refused to testify.

Also Tuesday evening, the New York Times’s Michael Schmidt, Julian Barnes, and Maggie Haberman reported for the first time on when Trump learned about the whistleblower complaint filed against him regarding Ukraine. They say he was briefed in late August — which may help explain why Trump reportedly started insisting there was “no quid pro quo” days later.

Overall, these new details don’t answer every remaining question about the hold on Ukraine aid, but they do tell us more about how it happened — and what Trump knew at the time.

Sandy said two OMB officials quit over this, but details are scant

The headline news from Sandy’s testimony is that he revealed that two officials at the OMB actually left their posts — both, in part, due to concerns over the Ukraine aid holdup and its process.

However, Sandy does not name these officials and provides few details on them.

One, Sandy said, “expressed some frustrations about not understanding the reason for the hold,” and then resigned in September.

The other official who resigned worked in the OMB’s legal division, according to Sandy. “This person expressed to me concerns about actions vis-a-vis the Impoundment Control Act” over the Ukraine aid hold, Sandy said — suggesting the person was concerned the hold was illegal.

Sandy clarified the timeline for the aid holdup

As Sandy tells it, his involvement with the Ukraine saga began on June 19, when he “heard that the president had seen a media report” about hundreds of millions of dollars in military aid for Ukraine, and that ”he had questions.”

Sandy can’t remember what the exact media report was, but one that fits the description is this Washington Examiner piece on that date, headlined: “Pentagon to send $250M in weapons to Ukraine.” So this may be when the military aid for Ukraine first caught Trump’s attention.

Sandy also explained how OMB communicated with the White House on the matter. The key line of communication was between the Robert Blair — an aide to acting White House chief of staff Mick Mulvaney — and Michael Duffey, a political appointee at OMB. (Duffey was previously the executive director of the Republican Party of Wisconsin.)

After this initial June inquiry, word trickled down that Trump wanted a hold on the Ukraine aid. Lt. Col. Alex Vindman, a staffer for the NSC, testified that on July 3, he heard that some of the aid might be blocked. Sandy, though, testified that he saw an email dated July 12 — from Blair in the White House, to Duffey at OMB — saying Trump wanted a hold on the aid. On July 18, an OMB staffer announced on a call with various officials that the aid would be blocked.

Sandy put the process in motion over the coming days. But he said he was confused about one thing: why was this happening? “There was certainly a desire to learn more about the rationale” for blocking the aid, he said. But at this point, no one could provide an explanation.

All that means the decision to block the aid was made before Trump’s July 25 phone call with the Ukrainian president, Volodymyr Zelensky. Then, hours after the call was over, Sandy officially implemented it.

A few days after that, on July 30, Sandy says the responsibility for approving specific funds (such as the Ukraine aid) was taken away from him — and was given to Duffey, the political appointee, instead.

Only much later, in September, does Sandy recall hearing some sort of explanation for the aid hold. Duffey sent an email “that attributed the hold to the President’s concern about other countries not contributing more to Ukraine,” Sandy testified. (There have recently been reports that unreleased White House emails show an effort to concoct an after-the-fact justification for the hold on the aid, and this could be part of that.)

But Sandy, the transcript makes clear, was not really in the loop on the White House’s plans. It was actually Duffey, and he has refused to testify. But we may learn more about him soon enough — the New York Times filed a Freedom Of Information Act lawsuit seeking emails between Duffey and Blair.

Trump learns of the whistleblower complaint — and, about two weeks later, lets the aid through

Throughout most of August, Trump officials like Kurt Volker and Gordon Sondland tried to make a quid pro quo deal in which the Ukrainians would make some announcement about the investigations Trump wanted. However, these discussions appear to have focused on a White House meeting for Zelensky — not the blocked aid.

Then, at some unspecified date in late August — likely on or after August 26 — lawyers for the White House counsel’s office briefed Trump that a whistleblower complaint had been filed. According to the New York Times, Trump’s aides explained “they were trying to determine whether they were legally required to give it to Congress.” So at this point, Trump clearly knew about the whistleblower complaint, but may have hoped it could still be covered up.

Around this same time, on August 28, word finally leaked out that Trump had blocked the aid. Zelensky’s adviser Andriy Yermak panicked and tried to ascertain what was going on, and on September 1, Sondland told him that the aid also hinged on the investigations announcement.

An intense effort to strong-arm the Ukrainians proceeded over the ensuing days. Sondland claimed to be talking with both Trump and Zelensky, and said that while Trump insisted there was “no quid pro quo,” he was adamant that Zelensky make the announcement on investigations.

Then, between September 9 and 11, several things happened:

So, on September 11, the Trump administration sent word that they would let the aid through after all.

Many interpret this as Trump “caving” because the heat was on, or because he “got caught.” However, another possibility is that he thought the deal was in hand — both Taylor and State Department official David Holmes testified they believed the Ukrainians seemed set to still make the announcement after September 11. (They never did.)

Researchers are finding Confederate memorials faster than they’re being taken down
Why climate activists disrupted the Harvard-Yale football game
Vox Sentences: The Catholic sex abuse reckoning continues in Pennsylvania
AG Jeff Sessions mocks border critics as 'lunatic fringe'
How to do everything, by the Highlight
Is family separation child abuse? DHS responds