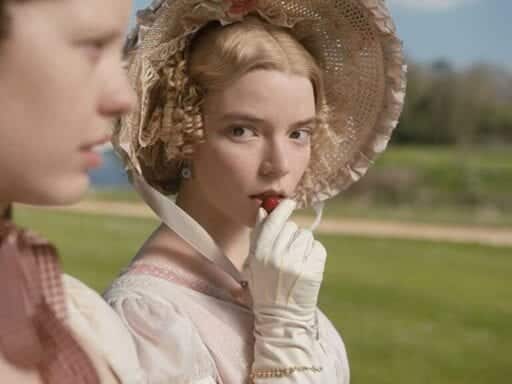 The best thing about the newest version is its keen sense of Austen’s sweet sarcasm.

Readers of Jane Austen are a feisty, fearsome bunch, with fiercely held opinions over which (if any) of the cinematic adaptations of her novels are good. One’s mileage may vary based on preference and taste, as well as more, shall we say, earthy factors. (After all, the most iconic moment in the entire Austen cinematic universe remains Colin Firth, as Mr. Darcy, emerging from a lake in a wet shirt in the 1995 BBC miniseries adaptation of Pride and Prejudice.)

This lifelong Austen reader has found herself flummoxed by the tone of most Austen adaptations. They’re all comedies, of course — Austen practically invented the romantic comedy — but few of them lean into the wicked satire that drips from nearly every page. Austen’s novels, to one degree or another, acerbically skewer the self-important landed gentry of her time and, to a lesser extent, the people who aspire to be in their company. What made her so masterful was her rare ability to combine that satire with authentic romance and unforgettable heroines, who have real and complex desires of their own. But take Austen’s satire out of Austen, and you’re left with swoony, frothy romances in Regency dresses.

There’s something sharper and more clear-eyed than simply ruffles and carriages in Austen, something most adaptations flatten out in favor of the romance and a few arch jokes. (To date, the only film I truly think gets Austen’s tone right is Whit Stillman’s 2016 Love & Friendship, but because it’s based on an unpublished and unfinished Austen novel, it comes up less frequently in conversation.)

To my eye, Emma (stylized EMMA. in the film), directed by photographer and music video director Autumn de Wilde, gets the balance just right. This new Emma doesn’t play too fast and loose with the story or its most familiar beats, but it digs out the absurdities of being wealthy (or adjacent to wealth) around the turn of the 19th century — the affectations, the frills that cover up the crudeness of real life, and above all, the vast, unmitigated boredom.

For some reason, the mid-1990s were a hotbed of Emma adaptations — a movie starring Gwyneth Paltrow, a BBC made-for-TV version starring Kate Beckinsale, and, of course, Clueless — but while they’re all great, only the last really got the spoofiness of the novel right. (There’s a pleasant but bland 2009 Romola Garai-starring BBC miniseries as well.)

But this new one, which stars luminous star of The Witch and Split Anya Taylor-Joy (born, coincidentally, in 1996), is pitched perfectly. Working from a screenplay by Eleanor Catton, who wrote the 2013 Booker-winning novel The Luminaries, de Wilde finds both the absurdity and the romance in Austen’s well-trod story of a “clever, handsome, and rich” heroine and the ways she very nearly runs her life off the rails meddling in the affairs of others.

The 2020 Emma follows the same story as Austen’s novel. Emma Woodhouse (Taylor-Joy) is 20 and lives with her doddering, hypochondriac father (Bill Nighy) in a genteel estate named Hartfield, bordering that of Mr. Knightley (Johnny Flynn). Knightley’s brother married Emma’s sister, and so they are practically siblings, though not “so much brother and sister as to make it at all improper” for them to dance with one another when their little Sussex village of Highbury has a ball.

Emma is the unimpeachable queen of Highbury, the wealthiest and loveliest woman in town, and she enjoys the deference and attention of others near enough to her station to socialize with her. That includes Miss Bates (Miranda Hart), whose family’s position was once high enough to make her part of the Woodhouse family’s social circle, but now has fallen enough that Emma feels free to roll her eyes behind Miss Bates’s back. There’s the wealthy Mr. Weston (Rupert Graves), who has recently married Emma’s former governess (Gemma Whelan), and whose son Frank Churchill (Callum Turner), heir to his aunt’s fortune, is a young man in which Emma has a great interest, though she’s never met him. And there’s Mr. Elton (Josh O’Connor), the new vicar, an amiable young man in need of a wife.

There’s also Harriet Smith (Mia Goth), a local girl and charity case for Emma. Emma decides to take Harriet on as a personal friend and, more importantly, a project. Harriet has eyes for a young farmer, but Emma dissuades her, convincing her instead that Mr. Elton is the man for her. That all goes south when Emma realizes Mr. Elton is actually into her, which is entirely unthinkable — the heiress, with the vicar! She sends him away and Harriet is heartbroken, but soon their attentions are occupied by something else: the arrival of Frank Churchill and, nearly simultaneously, Jane Fairfax (Amber Anderson), Miss Bates’s very accomplished and serene niece.

Some of the audience knows where this is going, and the rest of us can guess; this is a comedy, and though romantic knots will be twisted and intrigue will be had, everything will come out in the wash by the end. But de Wilde smartly imbues even simple moments — warming oneself by the fire, dressing for a dinner party, trying to escape someone in the hat shop — with snark and ridiculousness. Who knew there could be so much slapstick in a staid church service? We see a few butts in this Emma, and nosebleeds, and evidence of the foibles people fall into when they have too much time on their hands and very little to do with it.

Yet de Wilde’s Emma is not a mean movie, nor does it fall into the grotesqueries of a subversive period film like, for instance, Yorgos Lanthimos’s 2018 The Favourite. Emma and Mr. Knightley’s chemistry is real, and their care for one another feels genuine — in fact, the moments in which they realize the extent of their feelings are heightened, compared to other adaptations. The other characters all have their faults, but they’re lovable. Try not to feel for poor Mr. Woodhouse, freezing behind all of his screens, fearing his only daughter will leave him for a husband someday. Yes, he’s funny, but he’s beloved, too.

All of which adds up to a very comical, very humanist take on Emma. These characters don’t feel like figures lifted from a book, or actors laced into period garb playing out a tale set in a bygone golden era. Their time was just as silly as ours, and the things they struggled with were just as real. It’s a delight to watch — and it’s a worthy addition to the Austen canon, too.

Emma opens in theaters on February 21.

2020 Golden Globe nominations: the full list of nominees
The UN Climate Action Summit was a disappointment
A crashed voter registration website is Floridians’ latest obstacle to the right to vote
Protesters hit the streets for a second night after officers aren’t charged with killing Breonna Tay...
Silicon Valley megadonors unleash a last-minute, $100 million barrage of ads against Trump
The narrative power of “abolish the police”