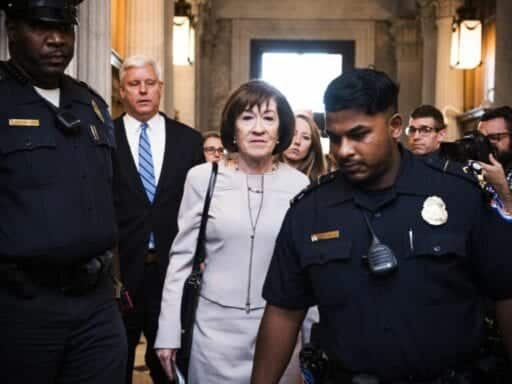 Share
Loading...
Sen. Susan Collins (R-ME), makes her way to the Senate floor in the Capitol before voting “yes” on a cloture that advanced the Supreme Court nomination of Brett Kavanaugh to a final vote on October 5, 2018. | Tom Williams/CQ Roll Call

Agents never interviewed a potential witness for a report that sent Kavanaugh to the Supreme Court.

A group of fence-sitting senators decided in fall 2018 to wait to decide whether or not to support Brett Kavanaugh’s nomination to the Supreme Court until after the FBI conducted an investigation into allegations of serious sexual misconduct by multiple women. Two senators, Susan Collins of Maine and Jeff Flake of Arizona, were convinced by the final report and sent him to the bench.

“It appears to be a very thorough investigation,” Collins said at the time.

Over the weekend, the New York Times published a book excerpt by reporters Robin Pogrebin and Kate Kelly that raises questions about just how thorough the investigation really was.

According to the report, a classmate approached a US senator during the investigation to say he saw Kavanaugh expose himself to a female classmate at a party, thrusting his penis in her face. The allegation closely resembled a separate alleged incident described by another former classmate, Deborah Ramirez. The senator, Chris Coons of Delaware, sent a letter to the FBI urging it to follow up with the classmate, Max Stier. But the FBI did not follow up with Stier.

Friends of the woman involved in the alleged incident have told the Times she does not have any memory of it. But the Stier case is still significant. Perhaps the FBI would not have found his story to be credible. Perhaps they would have. We just don’t know. And that’s the problem with the FBI’s report. It wasn’t thorough.

The White House and Senate Republicans set narrow parameters on the investigation, giving the FBI one week to interview two of Kavanaugh’s friends, a friend of Blasey Ford (who says she was not aware of the alleged assault), and Ramirez.

At the end of the week, the FBI sent a report to Trump that said they found no new corroborating evidence against Kavanaugh. Stier’s letter reminds us that they didn’t look particularly hard for it — and it gave Senate wobblers cover to support Kavanaugh.

The FBI investigation was narrow by design

On his way to vote in favor of Kavanaugh in September 2018, Sen. Jeff Flake (R-AZ) had a change of heart when a woman confronted him in a Senate elevator and made a tearful plea for him to reconsider. Footage shows Flake hanging his head.

Flake called on Senate leaders to pause the vote and the FBI was given a week to do a supplemental review of Kavanaugh. (The FBI had already run a standard background check, which he cleared.)

Senate Republicans and the White House said the FBI would have one week, that the investigation would be “limited in scope,” and it would probe “current credible allegations” against Kavanaugh. At first it was not clear what defined current allegations. And President Donald Trump said the FBI would have “free rein.” But it quickly became clear that the investigation would be very limited.

The New Yorker reported that many potential witnesses were frustrated they could not get a reply from investigators. Coons himself said in his letter to the FBI he had directed a number of people to the bureau tip line and urged them to speak with Stier. “I would like to specifically refer to you for appropriate follow up,” Coons wrote. They did not.

Meanwhile, in the Senate, Majority Leader Mitch McConnell likened Democratic calls for an inquiry to “McCarthyism” and promised a vote, regardless of what the FBI report showed. “The time for endless delay and obstruction has come to a close,” he said. “We’ll be voting this week.”

Fence-sitters got the cover they needed

Collins and Flake pointed to the report in announcing their support of Kavanaugh: “It appears to be a very thorough investigation,” Collins said (noting she hadn’t yet read the report).

Sen. Joe Manchin (D-WV) got on board, too, once it was clear Kavanaugh had the votes. Manchin said in a statement:

“I have reservations about this vote given the serious accusations against Judge Kavanaugh and the temperament he displayed in the hearing and my heart goes out to anyone who has experienced any type of sexual assault in their life. However, based on all of the information I have available to me, including the recently completed FBI report, I have found Judge Kavanaugh to be a qualified jurist who will follow the Constitution and determine cases based on the legal findings before him. I do hope that Judge Kavanaugh will not allow the partisan nature this process took to follow him onto the court.

After the Senate voted to approve Kavanaugh, Trump took a victory lap, putting a lie to the aim of the investigation process. When asked by Leslie Stahl if he believed Blasey Ford, he said: “I’m not going to get into it. Because we won. It doesn’t matter. We won.”

Americans are working harder these days. Their paychecks don’t show it.
Trump’s criminal justice record is more complicated than he claims
Omar al-Bashir, deposed president of Sudan, has been sentenced to 2 years in a reform facility
6 winners and 3 losers from the 2019 Oscars
“You think about what marriage has become”: 4 couples on having virtual weddings
Dr. Fauci got the Covid-19 vaccine on live TV