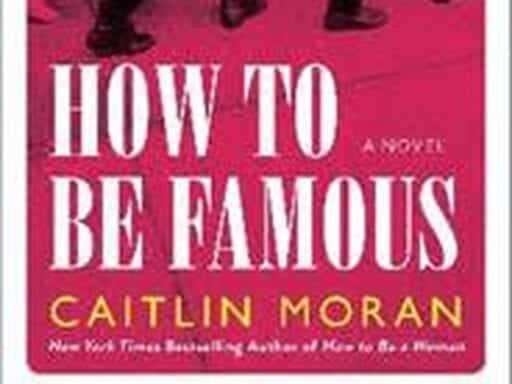 How to Be Famous, the new novel from Caitlin Moran, reads like poptimism in book form. It sparkles and fizzes, romping along even when its subject matter turns dark, and veering blissfully toward the best-case scenario whenever it can. And it never, ever turns away from its conviction that teenage girls must be defended to the death.

How to Be Famous is the second installment in Moran’s trilogy of autobiographical novels, but you don’t need to have read the first one to follow along (I haven’t). You’ll get the general idea as you go: Our heroine Johanna Morrigan is Moran’s alter ego, and she is following the rough arc of Moran’s life. The first volume in the trilogy, How to Be a Girl, covered her childhood and adolescence; with How to Be Famous, we catch up with 18-year-old Johanna as she moves to London in 1994 to make it as a music journalist, just as Moran did.

Johanna is thrillingly successful as a music journalist. She’s always in the company of famous people, and on the cusp of being famous herself; she describes herself as “one of Jesus’s sunbeams,” and makes it her brand to love everything. But she rapidly finds herself stymied by the boys’ club of London’s music scene. And when a sleazy comedian talks her into an ill-advised one-night stand — and then films and distributes it — she winds up embroiled in a kind of proto-#MeToo movement of women pushing back against the predatory men who surround them.

What’s most moving about Johanna’s story is that it always remains clear that while she has the glamorous career of a grown-up, she is still very, very young. “To live in a city at eighteen, alone but for a pet,” Moran writes, “is to engage in adult pursuits, but with the vision of a child.”

Johanna lives on takeaway spaghetti Bolognese and baked potatoes, “because that is the most treat-y meal,” she writes, “and children buy themselves meals that are treats.” She throws her laundry on the floor and blithely forgets to pay her bills. And every night, she goes to shows and interviews the rising stars of the Britpop music scene. She is a child-adult, and that’s part of why she is vulnerable to the manipulations of that sleazy comedian.

“I don’t really fancy this comedian,” she reflects as she accompanies him back to his apartment. But, she decides, it’ll be worth it for the story: “I am going to go and make a Sex Anecdote!” It is with exuberant innocence that Johanna gets into bed with this terrible man, and it is crushing to watch her try to come to grips with how deeply unpleasant she finds their encounter.

“Sex is so mysterious — I mean, half of it happens inside you. How crazy is that?” she remarks. So she feels that she can’t be sure that being filmed without her consent is actually wrong. Perhaps, she worries, “I am simply revealing my terrible inexperience if I wail, ‘Actually, I didn’t want you to do that!’”

Moran writes with a fierce and tender protectiveness of teenage girls like Johanna, who are chewed up and spat out by the glamorous adult worlds they are trying to make their way into. For Moran, the misogyny that allows a celebrity to distribute a sex tape he made with a teenage girl is deeply intertwined with the misogyny that prevents young women from progressing in the music world and treats the fandom of teenage girls as something to be ashamed of.

Toward the end of How to Be Famous, Johanna writes her greatest column, an ecstatic celebration of the force and power of teen girls. To be famous the way the Beatles were famous, she argues, it is necessary to love girls:

To be on the side of girls. To look girls in the eye, and declare yourself on our team. To copy girls. To acknowledge girls. To learn from girls. To accept what we give you — screaming, loving, singing, dancing — and let it set you free.

Johanna’s celebration of teen girls is the emotional key to the book, and because Moran is writing in the tradition of poptimism, it ends up successfully unlocking every one of Johanna’s challenges and dilemmas. With the power of teen girl magic, she overcomes the sleazy musician, she triumphs in her career, and she wins the love of the man she’s been longing for.

Is there an element of wish fulfillment here? Maybe. But if there’s anything teenage girls are due for, it’s an emotionally grounded book that respects them and what they can do, sees their vulnerabilities and weaknesses, and is still willing to give them a happy ending — even if that book is marketed to adults rather than to teens themselves. And How to Be Famous is that book.

Deepfakes are a real political threat. For now, though, they’re mainly used to degrade women.
March’s record-breaking collapse in retail sales, explained
What Kelly Reichardt learned from directing First Cow, her gentle masterpiece
A smart baby bed has stirred controversy for its $1,300 price tag. Now parents can rent it.
William Barr will give a press conference on the Mueller report Thursday. Here’s how to watch.
On TikTok, who owns a viral dance?