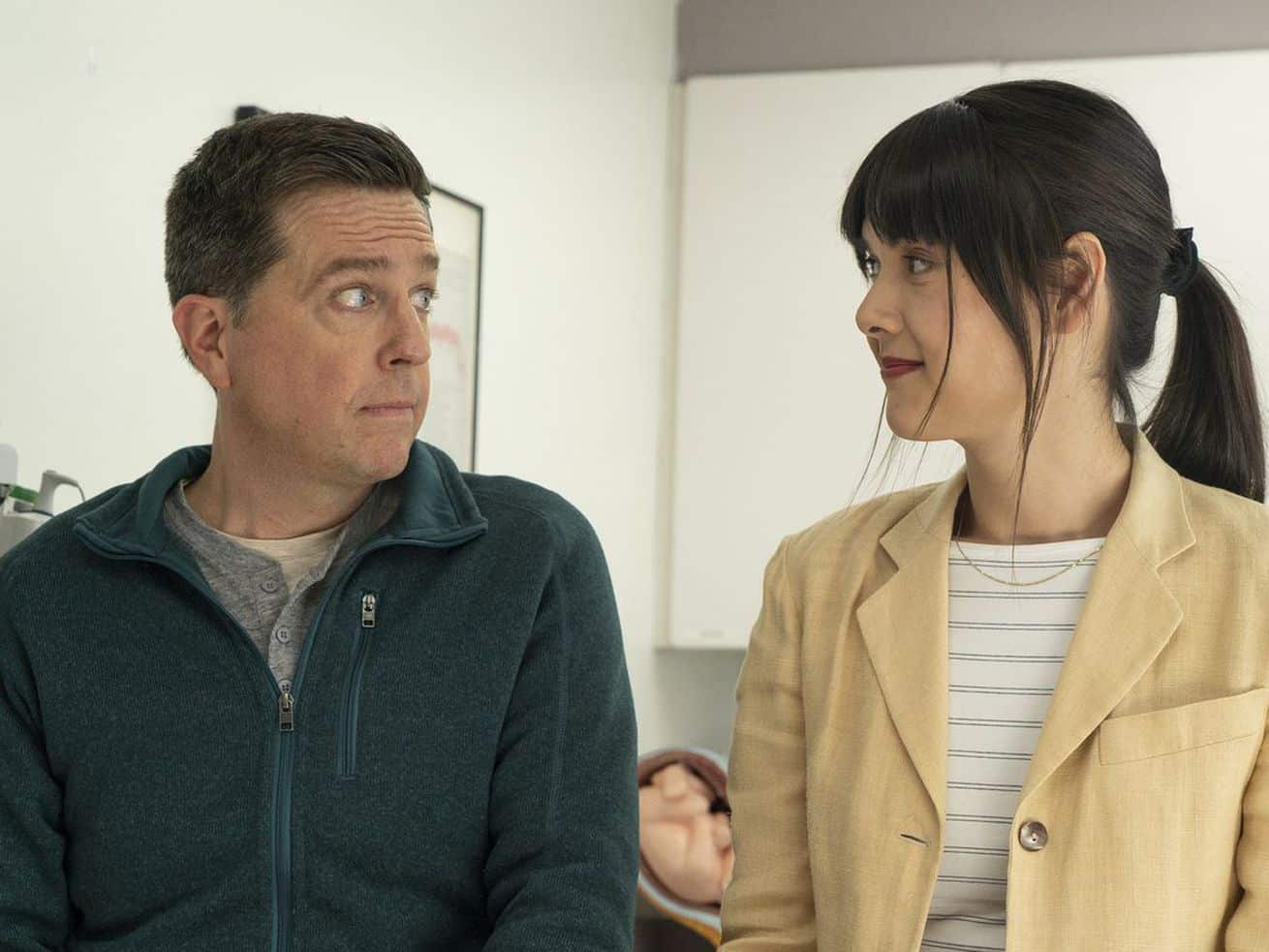 Director Nikole Beckwith says there are “different ways to be the object of someone’s affection.”

I get ornery about romantic comedies. Not because I don’t like them; not because I’m particularly cranky about romance. I just find myself wishing there were more movies about other kinds of relationships, about unlikely people building friendships that seem destined to last a lifetime.

That’s why I loved Together Together, one of my favorite movies from this year’s (virtual) Sundance Film Festival. The film stars Ed Helms and Patti Harrison as Matt and Anna: Matt is a middle-aged man who wants a child but is single. Anna is in her twenties, and the two meet when she applies to be his surrogate. Their relationship grows steadily, but it doesn’t take the turns you might suspect from that setup. Instead, writer and director Nikole Beckwith tells a story that challenges how we imagine supportive relationships, the boundaries of friendships, and the many shapes love can take. (It’s also very funny.)

After I saw Together Together, I knew I wanted to talk to Beckwith about why she made the movie and how she thinks about the wide spectrum of relationships we all form in our lives. We chatted over Zoom about love, friendship, the messed-up ways we talk about “romance,” and how a film set can be a place to learn about yourself.

The following conversation has been edited and condensed for clarity.

The premise of Together Together flips a typical “rom-com” on its head. Is that what you set out to do?

I was really just thinking about what it would be like for two strangers to embark on such a crazy, intimate, emotionally charged endeavor, and to be so integral to each other while moving forward into the next chapter of their lives. I wrote from a place of curiosity: I wonder what that would be like?

Once I got into this story and got to know the characters, that’s when I realized, Oh, yeah, I’ve got a massive appetite for a story about a different kind of love, a different kind of relationship, between a man and a woman. I have a huge appetite for seeing the male biological clock represented, seeing a man who wants to become a father, and seeing a woman who isn’t completely eclipsed by a pregnancy. The things I had been craving revealed themselves to me through the characters and through the story.

Together Together made me think about how many people I know who have mutually supportive, committed, and loving relationships between friends, but without any “will they or won’t they” expectation, or a desire to convert the relationship into a romance that’s “headed somewhere.” And yet, while watching the film, I felt like Matt and Anna’s relationship was surprising, and even strange.

Why do you think it’s so unusual to see a relationship like this in a film when it’s not so unusual in real life? Why do screenwriters seem to gravitate toward plots where the two characters get together by the end, or where there’s a lot of drama over whether they’ll get together?

I didn’t want them to get together! When Patti first read the script, she was nervous that they’d either get together, or that it would be revealed that Anna is a grifter and was never pregnant at all. And I was like, Yeah, right. I guess those are like the two lanes that we’re used to seeing.

It’s so frustrating. It’s so, so frustrating. I feel like it happens when we’re young. We get fed fairy tales over and over and over again from such a young age, and it brainwashes us into thinking that being “with” someone is the paramount thing, the ultimate goal. I don’t know why we do that! As soon as we’re done with the how-to count, how to identify color books, you’re just pivoting right over to “And then he kissed the sleeping princess, and she was psyched.” Then those children grow into adults who have that in their head, not just in terms of a way of viewing the world, but also story structure!

I can’t possibly be the first person who wrote a movie like this. I’m just one of the first people to get it through the gatekeepers. It wasn’t easy, and it took a long time. And then, people watch and think, Oh, that was good. Why don’t we see more movies about relationships like that?

Right. And the movies that try to turn the fairy tale structure on its head wind up telling the audience that you can either have the prince, or you can be alone. Maybe you can have some woodland creatures as friends if you’re lucky.

I would love to see a prince story where they’re just like, Wow, you’re my best friend. This is great. We’re couldn’t be happier.

In one interview, you said, “There are a lot of different ways to be the object of someone’s affection.”

Yeah. There are so many, so many ways to love and so many ways to be loved. I love loving people. I’m not as good at being loved, candidly, but I do really love the people in my life. I love birthday gifts and Christmas gifts and figuring out how to make some special, perfect little gesture. That’s not just for people that I’m sleeping with! Why would that only be kept for people I’m sleeping with? If anything, it’s like, You’re already sleeping with me, you’re welcome, why am I bending over backward? (laughs)

There are a lot of different ways to be the object of someone’s affection. But we don’t think of it that way. Matt and Anna aren’t sleeping together in this movie, thank god, but they are the object of each other’s affection. There is romance to it. We tend to categorize it as, well, it’s not a “romantic relationship.” But it is romantic. It’s just not sexual or physical.

Our vocabulary is hindering us because there is a lot of romance in friendship. It’s one of the most romantic things to feel seen, and to see, to be understood and to understand, to be present, to be supportive, to be elated, to be lit up. The people who do this for you are your friends. Friendship really is the basis for everything.

I’m one of those people where I’m always best friends with a person when I’m seriously dating them. If you’re not, what are you doing? When I’m in a long-term functioning relationship, that person’s got to be my best friend. It’s the foundation for all of it. It’s that layer that’s nurturing you and moving you forward and challenging you, giving you all this life sustenance.

But I don’t know why it’s only “romance” if you’re also putting your tongues in each other’s mouths. [A friendship] is still a really important relationship.

So many of those assumptions about “romance” come from decades of watching movies and TV shows that tell you unless you graduate to that level, then it’s not a “real” relationship. In fact, we tend to use the word “relationship” only to refer to those dating relationships, which tells us how much we’ve bought that idea wholesale.

I’m sure if we take a closer look, it’s probably really detrimental to all of our minds, and especially young minds. And it’s likely also partially responsible for keeping people in unhealthy relationships because we’ve made the idea of being in a relationship out to be “you complete me.” We think that’s the type of relationship that’s going to complete you. That’s probably really, really bad! It gets candy-coated and glossed over so that this bad, toxic thing looks like a beautiful cupcake. But there’s poison in it.

I keep describing Together Together as a “platonic rom-com,” but not “romantic.” Now I don’t even know if that’s the right way to put it.

It’s hard, because when you’re saying it, you’re aware of the way it sounds. You say “romantic,” but then you have to lay out three caveats to contextualize. It’s complicated. When I’m asked, “What is the genre of the movie?” I don’t know. Just an honest, intimate, kind movie. That’s the genre. Is that a genre? I don’t know. Is it a comedy? Is it a “dramedy”? Is it a drama? I don’t know!

Did you take away anything, personally, from making the movie?

Even if it came from my own heart and mind originally, I’m still being confronted with what it says. I realized, through repeated exposure, what from my own life I was working out or exploring or celebrating or examining. Taking a good, hard look at those corners of my heart over and over again is illuminating.

Also, when you make a movie, when you’re on set and you’re collaborating, you can’t help but learn things from each other, because you’re all working so closely together. We had a really beautiful set. We were enabling each other to make our best work. I think a common misconception, as a director, is that everyone on set is there to enable you to make your best work. But it’s the opposite. Your job as director is to enable everyone around you and to try to empower everyone around you to be making their best work. That’s what everyone should be doing. When you do that, there’s a sense of everyone being present with each other and taking care of each other — not unlike the themes in the film.

That wasn’t totally surprising; no one who gravitated toward making this project made a lot of money. We were drawn to these feelings and these ideas and ideals. That’s the kind of set we had where we were all very present for each other. You learn a lot just by being in that environment every day. I think that’s strengthening. Not to use the word “nourishment” again, but once you are getting that kind of nourishment, you’re like, Oh, I should be eating that every day. And I should be putting that onto the world every day.

That is definitely not the rule on every film set!

Yeah. It’s hard to make a movie! I can see how when you add that to some kind of toxic masculinity it might be a difficult stew. Or you can approach that difficulty and stress with solidarity, with connectivity, with being in it together. And it can be really bonding in that way.

Or I’m just a Care Bear!

Together Together opens in limited theaters on April 23 and will premiere on digital on-demand platforms on May 11.

US extends coronavirus guidelines, Olympics set new date: Monday’s coronavirus news
What we know about a shooting at a White Settlement, Texas church
Earthquakes shook California this week. More could come, but predicting them isn’t easy.
How to build a circular economy that recycles carbon
Why John Roberts won’t save the impeachment trial from partisanship
How the US keeps poor people from accessing abortion