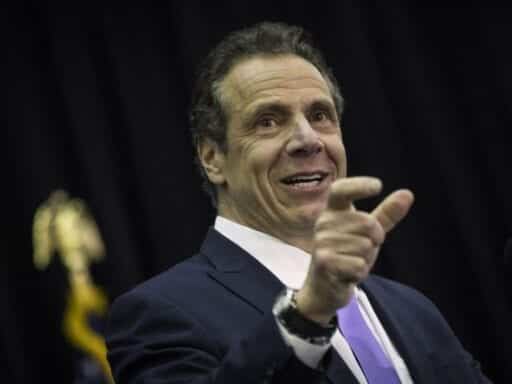 The recommendation comes in a big report to Gov. Andrew Cuomo.

The New York Department of Health last week backed legalizing marijuana for recreational use in a report to Gov. Andrew Cuomo (D), who in the past opposed the policy change but now appears to be moving closer to supporting it.

The 75-page report ultimately concluded that the pros outweigh the cons for legalization. “Numerous [New York state] agencies and subject matter experts in the fields of public health, mental health, substance use, public safety, transportation, and economics worked in developing this assessment,” the report said. “No insurmountable obstacles to regulation of marijuana were raised.”

Cuomo announced the state legalization study in January. He’s been under pressure to support legalization in part due to Cynthia Nixon’s gubernatorial campaign, which has repeatedly attacked Cuomo from the left — including through its support for legalization.

It’s unclear if the report will be enough to sway Cuomo.

But some states neighboring New York already have taken the plunge. Massachusetts legalized marijuana possession and sales through a ballot initiative in 2016. Vermont Gov. Phil Scott (R) signed a law earlier this year legalizing marijuana possession, but not sales, in the state. And New Jersey Gov. Phil Murphy (D) is publicly pushing for fully legalizing pot.

Marijuana is already legal for medical purposes in New York.

In total, nine states and Washington, DC, have legalized marijuana at varying levels.

The New York report comes in the middle of a very big year for marijuana legalization, from Canada legalizing pot to California opening the world’s largest cannabis market. If New York followed suit, it could become the world’s third-largest marijuana market after California and Canada.

Elizabeth Warren’s first question at an Iowa event: Why release your DNA results?
Trump leaves door open for third North Korea summit
“King-Lee Day” and other ways states bend MLK’s legacy
Why Subway’s $5 footlong had to die
Everyone in the White House cluster who has reportedly tested positive for the coronavirus
Piers Morgan made fun of Daniel Craig for carrying his baby. The response from dads was adorable.