The next challenge for plant-based meat: winning the price war against animal meat 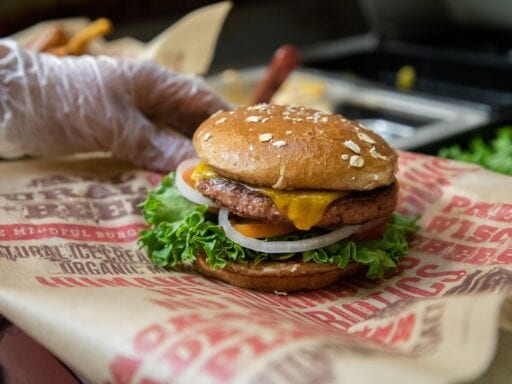 Share
Loading...
A plant-based Beyond Burger at a restaurant in Chicago. | Zbigniew Bzdak/Chicago Tribune/Tribune News Service via Getty Images

To save the world, plant-based meat needs to be cheaper

The last couple of years have been consequential ones for meatless meat, as we at Future Perfect have documented. For all meatless meat’s success, however, advocates shouldn’t feel complacent. After all, meatless meat still makes up less than 1 percent of the annual meat consumption in the US — hardly a dent in how we eat.

Perhaps one of the biggest obstacles to mass meatless meat consumption becomes apparent when you get to the checkout line at your local grocery store.

One pound of factory-farmed beef burgers at the Walmart near me? $2.80/pound.

That price disparity may well be a big factor keeping meatless meat from breaking through in a big way.

The pandemic has only underscored the importance of making meatless meat be a mainstream alternative to factory-farmed meat. Slaughterhouses, long notorious for their terrible working conditions, have been overwhelmed with coronavirus cases, in some cases because they responded to the coronavirus crisis by telling employees not to take any sick leave for any reason. With slaughterhouses shuttered, agriculture companies have engaged in mass cullings of animals they couldn’t sell, and the price of animal meat has gone up and remains higher than typical.

And then there are the larger-scale problems that the pandemic reminded the world of: It is a public health hazard to raise animals in crowded conditions that can incubate and rapidly spread disease.

All those problems have buoyed the plant-based meat industry, which was already coming off a record-setting year when the coronavirus crisis started. The simple idea of plant-based meat is that we can make food that tastes like meat, has the same nutrient profile as meat, and doesn’t come from animals — solving the environmental, public health, and ethical problems with factory farms in one swoop.

Consumers are interested. More and more companies have launched plant-based meat brands, more and more fast food and casual dining restaurants have added menu options, and major players in the field have raised a lot of money — including a new $200 million in fundraising at Impossible Foods, announced Thursday.

There’s a lot at stake. Billions of animals are raised on factory farms and killed for food in the United States every year. The way we raise them contributes to climate change, antibiotic resistance, swine and bird flus, workers’ rights abuses, and animal cruelty on an appalling scale. But all the corners we’ve cut in animal farming mean that meat is cheap. To give every person access to plant-based alternatives and to meaningfully transition away from factory farming, plant-based alternatives have to get just as cheap — without cutting any of the same corners.

Why is meat so cheap anyway?

One big challenge for meatless meat is to become competitive on price with regular meat. It’s a steep challenge because meat in America is shockingly, unprecedentedly cheap.

“The most processed cheap forms of chicken are just insanely cheap, relative to historical standards and relative to other food products on the market,” Lewis Bollard, who researches animals at the Open Philanthropy Project, told me. “The chicken industry has managed to cut all their corners, they don’t pay their environmental bills, they don’t pay for a lot of the public health hazards they cause. They have managed to produce a product that is just artificially cheap and hard to compete with.”

Animal agriculture is also heavily subsidized by the federal government. That said, neither Bollard nor Zak Weston, a researcher at the Good Food Institute, thought direct monetary subsidies were the main reason meat was so cheap. More important are invisible forms of subsidization like not enforcing worker’s rights, exempting factory farms from animal cruelty laws, not requiring companies to engage in environmental cleanup, and not restricting practices — like antibiotic overuse — that impose costs on the whole world.

“It’s not the case that plant-based meat is weirdly expensive or labor intensive or something,” Weston told me. “The animal protein industry has spent decades wringing incredible efficiencies out of every part of the program. Animal meat gets to externalize a lot of its negatives — externalities like health care, ecological, worker welfare, animal welfare.”

In other words, if the animal meat industry were held accountable for the costs their products and their workings inflict on society, meat would be much more expensive.

Plant-based meat is getting cheaper, but it still doesn’t beat animal meat

“The three priorities we set ourselves are to develop products that from a sensory perspective closely resemble animal meat, the second is nutrition, and then the third is about cost,” Chuck Muth, chief growth officer at Beyond Meat, told me. “We know that to democratize our brand, we’ve got to bring the price down.”

“We were thinking about cost reductions and getting to the cost structure of commodity ground beef from the very beginning,” David Lee, chief financial officer of Impossible Foods, told me. “We knew that if we had the best product at the same cost then consumers would vote with their stomachs.”

In the last few years, they’ve already made progress. Companies were wary of sharing with me specific figures on their costs, but based on Securities and Exchange Commission filings, Bollard estimates that Beyond’s cost of production has fallen from $4.50/pound last year to $3.50/pound now.

Impossible declined to share similar numbers but noted that they’d cut their prices 15 percent earlier this year because of savings from scaling up their operations. At a few outlets, such as Dunkin’, the Beyond Sausage Sandwich sells for the exact same price as the meat sausage sandwich — and Muth confirmed that Beyond’s products do much better when they’re listed at the same price as meat.

“The thing we like to say here,” Muth said, “is we’re changing the way consumers and shoppers think about what they eat. We don’t want pricing to be a barrier when they’re considering that. We’d like to take pricing out of that conversation as best as we can.”

How to make plant-based meat cheap

There’s no single brilliant secret to making a mass-manufactured product cheaper. Instead, experts told me, it’s a matter of relentlessly making every element of the supply chain, the manufacturing process, and the distribution process work slightly better.

“A lot of issues today are really around scale,” Muth told me. When a company is big enough, it can make purchases at scale, get expensive equipment that’s only worthwhile if it’ll be used to make an enormous number of products, have distribution centers in lots of different parts of the world to minimize transportation costs, and negotiate better deals for its supplies. “As we scale up, our costs naturally go down,” Lee told me. That means there’s the potential for a virtuous cycle where lower costs recruit more consumers, who make further cost savings possible.

Plant-based meat started out small and is still only a fraction of the market share of animal meat, but as it gets bigger, more of these options open up. Beyond Meat has opened factories in more countries and inked deals with wholesaler clubs such as Costco to make its products available more cheaply. The company has a commitment to, by 2024, sell at least one product that’s at the same price — or cheaper — than animal meat.

Weston expected plant-based meat prices to keep falling. “It really just boils down to scale and optimization. Developing operational efficiency is something that takes years, and the animal ag industry has a multi-decade head start on this. As the quantity produced goes up, we’ll be able to drive up operational efficiencies,” he told me.

But the plant-based meat companies that have made the most headlines for their uncanny verisimilitude to meat — Beyond Meat and Impossible Foods — use novel proteins like mung beans and peas. Those are considerably more expensive, and getting them cheaper would be a critical step in getting plant-based products cheaper. (Another option would be abandoning these fancier proteins; plant-based foods in Europe and China largely use wheat and soy protein, and they’ve still gone over well with consumers.)

There is reason for optimism. After only a few years of research and development, plant-based meat products are already within striking distance of animal ones. There is likely lots of low-hanging fruit in optimizing the supply chain and production process for these products because they’re so new. “The single most impactful intervention is R&D which is going to make these products better and cheaper,” Weston told me.

Investors seem interested in making sure that research happens. Beyond Meat’s stock price has swung wildly over the last year but is currently almost double what it was at its IPO last year. Impossible Foods, privately held, announced on Thursday that it had secured $200 million in new funding. And many existing meat companies are expanding their range of plant-based offerings.

Those investors and companies are betting that as plant-based meat gets better at competing with animal-based meat — on price, flavor, and availability — it will claim a bigger and bigger share of the global market for meat. If they’re right, it’d be a rare piece of good news in a dismal 2020.

Saudi Arabia won’t be able to sweep the Jamal Khashoggi case under the rug
Why “Zendaya Is Meechee” became the feel-good pop meme of the moment
The songs that made America dance in the streets this weekend
Poll: Biden’s approval rating got a convention bounce. Trump’s didn’t.
Beyoncé’s Lemonade is one of the best movies of the 2010s
How Jane the Virgin’s giant twist sets up the show’s endgame