The next Democratic debate could feature a much smaller stage 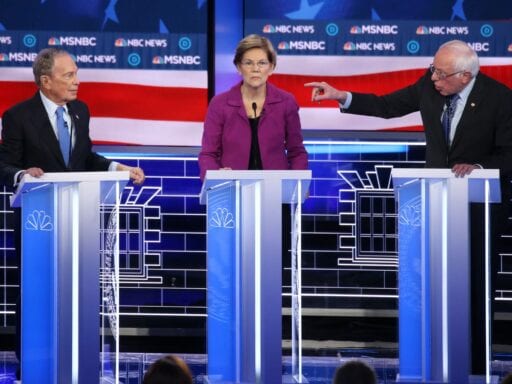 Candidates will return to the stage in Arizona next month for the 11th debate of the primary.

Believe it or not, there are still more Democratic debates: After three in quick succession this month, the next debate — No. 11 — will take place on Sunday, March 15, in Phoenix, Arizona.

The debate will be co-hosted by CNN and Univision and is two days ahead of a busy election night, when Arizona, Florida, Illinois, and Ohio vote. CHC Bold — a political action committee affiliated with the Congressional Hispanic Caucus — has partnered with the Democratic National Committee (DNC) for the debate. The debate starts at 9 pm ET and runs for about two hours, but the location, moderators, and criteria to qualify have yet to be announced.

The March debate (probably) won’t be the last. The DNC’s plan calls for 12 debates in the 2020 Democratic presidential primary, with the last on a yet-to-be-announced date in April.

Previously, candidates have been required to win pledged delegates to the Democratic National Convention, exceed a certain number of individual donations, or meet a polling threshold in order to qualify for the debates, but it’s unknown how those requirements might change as the primary race moves into its later phases.

A smaller field of candidates

It’s possible that Sen. Bernie Sanders — the current frontrunner for the nomination — will have all but locked up the race by then. That’s looking a lot more likely after his overwhelming victory in the Nevada caucuses, and the Vermont senator hopes to knock out one of his leading rivals — former Vice President Joe Biden — with a come-from-behind victory in the South Carolina primary on Saturday.

Sanders also has the best chance of winning a majority of pledged delegates, according to the FiveThirtyEight primary forecast, at 43 percent. In second place: No one (which could lead to a contested convention), and Biden trails in third with a 10 percent chance.

If that’s the case and Sanders solidifies his claim to the nomination, then the March debate could be uneventful.

Of course, something else could happen. If the moderate lane in the primary — currently crowded with Biden, former South Bend, Indiana, Mayor Pete Buttigieg, Sen. Amy Klobuchar, and billionaire Mike Bloomberg — thins and support coalesces behind one candidate, then Sanders could face a strong challenger down the stretch.

In that scenario, the Arizona debate could feature a small but fiercely contested stage.

In either case, however, it’s likely that at least a few of the eight remaining candidates will be out of the race by then, making for the smallest debate line-up yet. Every candidate not named Sanders (or Tulsi Gabbard, who’s only technically still in the race) has already faced calls to drop out.

In short, just about anything could happen over the first few weeks of March, but if nothing else, we can look forward to a smaller debate stage.

The first guacamole recipe written in English came from a British pirate
Your guide to getting into Schitt’s Creek, this year’s Emmys comedy darling
Why Trump’s acquittal will damage US foreign policy
Kevin McCarthy refutes the idea he has legit concerns about corruption in a single Instagram post
In Netflix’s Becoming, Michelle Obama tells her story and encourages us to do the same
The battle for Latino voters in Arizona and Florida, explained