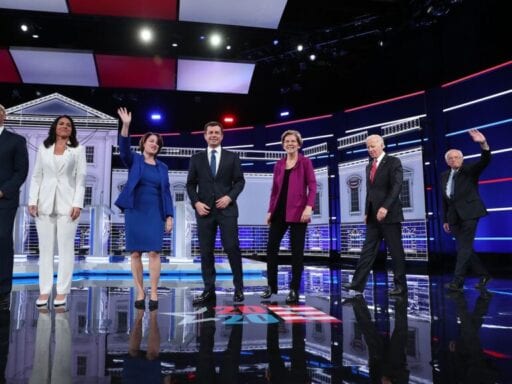 Everything you need to know about the next Democratic debate.

Prepare for a deluge of Democratic debates come 2020 as we barrel toward the presidential primaries, starting with one in Iowa in January.

The next Democratic debate will be held on Tuesday, January 14, 2020, at Drake University in Des Moines. CNN and the Des Moines Register will host the debate, which will be the seventh showdown the party’s primary candidates have had this election cycle.

After that, you can expect at least three more debates before the year even enters its third month: one in Manchester, New Hampshire, on Friday, February 7, the next in Las Vegas, Nevada, on Wednesday, February 19, and another in Charleston, South Carolina, on Tuesday, February 25.

(The pattern here: The debates are all just days ahead of the caucuses and primaries in the respective dates they’re being held.)

The Democratic National Committee has not yet released the criteria for candidates to make next year’s debates, though it’s less than a month away. Generally, candidates have been required to meet certain polling and individual donation thresholds to make the stage.

For the December debate, for example, candidates had to get at least 4 percent support in at least four DNC-approved national polls or 6 percent support in two single-state polls in the early voting states of Iowa, New Hampshire, South Carolina, and Nevada from October 16 to December 12. On top of that, they had to have received donations from at least 200,000 unique donors, including more than 800 in each of 20 states.

The criteria have garnered some grumbling among some contenders who didn’t make the cut. Ahead of the December debate, Sen. Cory Booker (D-NJ), who failed to make the stage, spearheaded a letter signed by other major candidates asking the DNC to reconsider its requirements and ask candidates to either meet the polling or the donor standard. The DNC has indicated it has no plans to make that change.

If the criteria for January are similar to December’s, we might be looking at a relatively small stage. For Thursday’s December debate, seven candidates made the cut:

These are the nine candidates that didn’t make it:

It’s worth noting that Bloomberg has had no plans of trying to make the debate stage from the start — he’s funding his own campaign entirely and isn’t trying to get any individual donors. Sen. Kamala Harris (D-CA) would have been on the December debate stage but dropped out.

Perhaps the biggest question mark in the January debate isn’t who will be on the stage but rather what else will be happening at the same time: impeachment.

The House of Representatives voted to impeach President Donald Trump on Wednesday. In January, the Senate trial to decide whether or not to convict the president and remove him from office will take place. And that has big implications for the senators running for president who will have to sit in on the trial instead of out on the campaign, as Vox’s Li Zhou explained:

[The timing] would keep several Democratic presidential contenders trapped in Washington with the Iowa caucus just weeks away.

The trial itself is expected to run for six days a week when it’s in session. In a shift from other hearings the Senate holds, lawmakers will be barred from speaking at it, though they will be able to submit written questions to the House managers and defense counsel.

A DNC official told CNN that the committee will try to work with the campaigns to make sure the impeachment trial doesn’t keep them off of the debate stage. “If a conflict with an impeachment trial is unavoidable, the DNC will evaluate its options and work with all the candidates to accommodate them,” the official said.

To put it plainly, there are a lot of unknowns heading into next year’s debates.

Republicans prepare to unveil long-awaited $1 trillion coronavirus relief package
Hunters’ devastating ending and its two twists, explained
No writer does “weirdly specific yet relatable” better than Daniel Mallory Ortberg
April was another lost month for Trump’s coronavirus response
The political science of why Game of Thrones’ Daenerys may be a terrible queen
Ronan Farrow, NBC News, and how the network missed the Harvey Weinstein story, explained