The next Democratic debate is only 12 days away 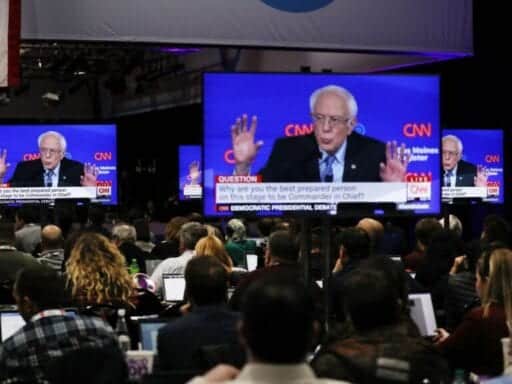 Like debates? We have some good news for you.

Democratic debates are hitting at rapid-fire pace as the 2020 primary unfolds. Next up: Wednesday, February 19, in Las Vegas, Nevada. Maybe we’ll actually have the Iowa caucuses results by then.

The lead-up to the Las Vegas debate is already dramatic, thanks to the DNC’s decision to switch up qualifying rules around individual donations. For prior contests, the committee required that candidates surpass a specific amount of individual donors in order to make the stage. This time around, they’re scrapping it, paving the way for self-funding billionaire Mike Bloomberg to make the stage.

Now, candidates have to hit either a delegate or polling threshold: They have to have landed at least one pledged delegate for the Democratic National Convention out of Iowa or New Hampshire, or they have to get either 10 percent or more support in at least four national, South Carolina, and/or Nevada polls, or 12 percent or more in two state polls in South Carolina and/or Nevada. Polls that take place between January 15 and February 18 will be considered.

Thus far, former Vice President Joe Biden and Sens. Bernie Sanders and Elizabeth Warren have qualified for the next debate, and several others could qualify with delegates out of the first two states. But Bloomberg, who is not competing in Iowa or New Hampshire but who is rising in the polls, could get there soon. Former South Bend, Indiana, mayor Pete Buttigieg, who put in a strong showing in Iowa, hasn’t qualified for the next debate yet either.

As Katelyn Burns pointed out in Vox, candidates on and off the debate stage — and in and out of the race — have raised some concerns about the DNC’s rule change that appears to benefit Bloomberg, especially given the committee’s refusal to alter its criteria in the past when candidates asked:

“To now change the rules in the middle of the game to accommodate Mike Bloomberg, who is trying to buy his way into the Democratic nomination, is wrong,” Jeff Weaver, a senior adviser to Sanders, told the New York Times. “That’s the definition of a rigged system.”

Entrepreneur Andrew Yang — who has advocated for relaxing the requirements before, albeit to encourage diversity on the debate stage — made an even more pointed critique.

Yang accused the party of not only tailoring the debate criteria to include the billionaire, but suggested Bloomberg has tried to avoid the scrutiny debates can bring. “The truth is I don’t think Mike particularly wants to debate,” he said in a tweet late Friday.

The other candidates who haven’t yet qualified for the Nevada debate but who are still running are Michael Bennet, Tulsi Gabbard, Amy Klobuchar, Deval Patrick, Tom Steyer, and Andrew Yang.

If it feels like this is moving fast, it’s because it is

As a political reporter who very much enjoys her nights and weekends — especially Friday nights and Saturdays — I feel confident saying that the debate and primary schedule this month feels pretty intense. (Though voting on weekends is good for democracy!)

And it doesn’t slow down once February ends. We’ve got Super Tuesday on March 3 and plenty of other primaries after that where a good chunk of delegates are up for grabs.

The contest isn’t just ramping up logistically — on the debate stage, on the campaign trail, and elsewhere, elbows are getting pretty sharp.

By the time the Las Vegas debate rolls around, we’ll have results from Iowa and New Hampshire, but there will still be a lot of race to play out. Bloomberg has essentially skipped the first four primary states, meaning we won’t really get a sense of the impact of his presence in the race until March. And it’s still unclear how both top-tier and lower-tier candidates plan to fight this out.

But Las Vegas is a fun place, so at least there’s that. Maybe it’ll bring a candidate or two some luck.

Facebook has always been about relationships. Now it’s in the dating game.
Joe Biden will get the Covid-19 vaccine on live TV
“Texodus,” House Democrats’ favorite new 2020 phenomenon, explained
The difference between the DNC and RNC, in one tweet
Cory Booker on why Democrats should go bolder on gun control
The National Archives edited a Women’s March picture to be less critical of Trump