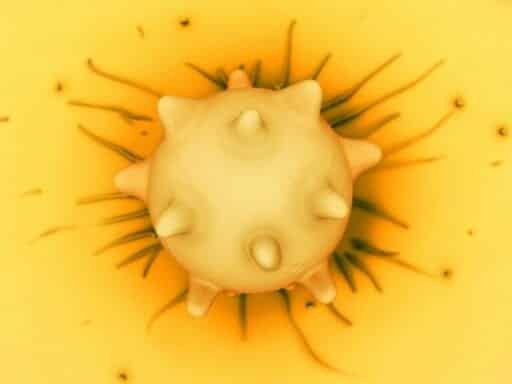 Cancer’s most promising therapies come with $100,000-plus price tags.

For the first time ever, we’re living in a moment when many of our most promising medical advances are far out of reach for the vast majority of people who could benefit from them. And nowhere is that truer than for cancer immunotherapy, the fast-moving field of cancer treatment research that was honored on Monday with the Nobel Prize in physiology or medicine.

Immunotherapies are a cause for great hope in treating many types of cancer, including melanoma, lymphoma, and lung, kidney, and bladder cancers. They stimulate the immune system to help the body attack cancer from within. And unlike chemotherapy or radiation, which kill off healthy cells in the body, immunotherapies are much more targeted, even in patients with late-stage disease.

With these drugs, doctors have watched deadly tumors melt away, and patients who were supposed to die go into remission for years. And while amazing turnarounds aren’t seen in everyone or for all cancer types, J. Leonard Lichtenfeld, the deputy chief medical officer of the American Cancer Society, told Vox that immunotherapies have oncologists using a word they aren’t used to employing: cure.

“When I was treating patients with melanoma in the 1970s, some of those drugs we used back then are still backbones of treatment for metastatic melanoma 40 years later. Then along came the immunotherapies, and they truly changed the landscape of treatment for these patients,” he says.

But these incredible advances and the promise of cancer cures also come with eye-popping price tags that reach well past $100,000 per patient. People who need cancer immunotherapies often hit a cost wall and can’t afford to pay for them — and it’s a problem that’s growing worse, Ezekiel Emanuel, a professor of medical ethics and health policy at the University of Pennsylvania’s Perelman School of Medicine, told Vox.

“What we’ve seen over the last two decades is the cost of cancer drugs go through the roof. Every year, the introductory price seems higher and higher and higher,” he said. The rising costs of new drugs not only mean that individuals can’t access them; they’re also unsustainable for our health system.

Getting a cancer immunotherapy treatment costs more than a house in many cities in the US, more than putting a few kids through private college. The average cost of cancer drugs has increased from $50,000 per patient in the mid-1990s to $250,000 today. That’s a fivefold increase on inflation. It’s also four times the median US household annual income.

Immunotherapies in particular often cost more than $100,000 per patient. Doctors now use immunotherapies in combination, which means those costs can quickly double or triple. For some of the newest immunotherapies, the price tag is even steeper: When you include the value of the medical support necessary to deliver the treatments, a price tag of $850,000 per patient is not unheard of, according to Emanuel. “The drug companies say that they offer significant discounts to many patients, but because they won’t release this data, the list price is all that we have to go on,” he wrote.

And the list prices have become staggering. This chart from Peter Bach, a researcher with Memorial Sloan Kettering, says it all.

(Keep in mind that the x-axis here is logarithmic, not linear. Scientists sometimes use logarithmic scales to make big number sets manageable. But if Bach had plotted the prices on the x-axis at a linear interval, the cost curve would look much steeper.)

Patients with health insurance can be denied coverage for immunotherapies, even when it’s recommended by their oncologists. When they aren’t, the list prices are so high that the copays can be exorbitant. A patient might face a 25 percent copay, which means they’re getting the drug at a 75 percent discount. When the price tag is upward of $10,000 a month, that leaves patients on the hook to cover at least $2,500 per month. And that’s prohibitive for many people.

This brings us to the next question: Why do these drugs cost so much? To get to the bottom of it, Emanuel posed an interesting thought experiment in a recent Wall Street Journal op-ed. Drug companies typically argue that the cost is related to how much they had to invest in research to develop the drug. The CEO of Novartis, maker of the immunotherapy drug Kymriah, said the R&D costs of the drug were about $1 billion. But Emanuel didn’t buy it:

That’s certainly a big investment, but it is much less astounding when compared with the drug’s anticipated revenue. Based on Kymriah’s list price, treating just 2,700 patients would allow Novartis to recoup its entire investment. Even with significant discounts for many patients, it wouldn’t take many treatments to turn a considerable profit.

… Producing the immunotherapy requires more than three weeks of laboratory manipulations for each individual patient.

But according to researchers at the University of Pennsylvania, the total cost for removing, reprogramming and infusing the cells into each patient is less than $60,000—just one-sixth of the $373,000 price tag. Production costs do not seem to be driving the stratospheric drug prices.

So Emanuel came to the conclusion we have come to at Vox many times: The drugs cost this much because in America, drug companies are allowed to charge that much. And they reap handsome multibillion-dollar profits as a result.

In other countries, governments exert much more influence over the entire health care process. That allows them to negotiate directly with drugmakers. The government sets a maximum price that it will pay for a drug, and if the company doesn’t agree, it simply loses out on the entire market.

The United States, by contrast, has long taken more of a free market approach to drugs. Pharmaceutical companies can haggle over prices with a variety of private insurers as well as selling to the government. What’s more, Medicare, the government program that is the nation’s largest buyer of drugs, is actually barred from negotiating drug prices. That gives pharma much more leverage.

So drug companies here do what any other profit-maximizing company does — they try to get the highest prices possible without going so high that no one will buy them. And that status quo has led to cancer drugs that cost most than homes.

One final disturbing aspect of the cancer cost conundrum: Public money helped pay for many of these drugs that patients can’t afford to access.

In a recent analysis, published in the journal PNAS, researchers found that American tax dollars helped fund the basic research that went into every single one of the drugs approved by the Food and Drug Administration between 2010 and 2016 — including several cancer immunotherapies. All told, $100 billion in National Institutes of Health research grants helped advance the science behind those drugs.

So the Nobel Prize this week is a reminder of the great promise of these drugs — and the incredible, lifesaving science that led to their discoveries. But it should also be a moment to reflect on who is benefiting from them and who isn’t. How will the 1.7 million Americans who are diagnosed with cancer per year gain access if prices keep rising and we don’t address this cost conundrum soon?

Devin Nunes was directly involved in the push for Biden Ukraine investigations, says Lev Parnas
Vox Sentences: House gives Senate the USMCA for Christmas
This climate problem is bigger than cars and much harder to solve
Trump’s radical lawsuit against Nevada’s vote-by-mail law, explained
Airborne coronavirus transmission, explained
How the 2020 census struggled to overcome Trump to get an accurate count