The North Carolina gerrymandering chaos that could upend the midterms, explained 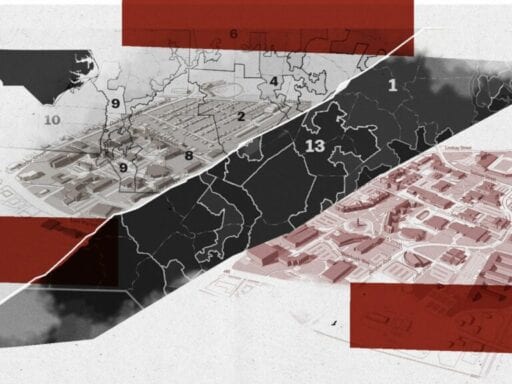 North Carolina might have to redraw its House maps mere weeks before the midterms.

A US district court ruled earlier this week that North Carolina’s partisan gerrymandered congressional districts were unconstitutional, raising the very real possibility that new maps might need to be drawn mere weeks before the 2018 House elections.

New districts would likely be a boon for Democrats: Though North Carolina is evenly or nearly evenly divided between Democrats and Republicans, Republicans currently hold 10 of the state’s 13 House seats. In their quest for a House majority, even one or two newly competitive seats in North Carolina would be a major boost to Democrats’ chances of taking over at least one chamber of Congress.

But first, state officials and the courts need to figure out if drawing new districts is even possible in such a short time and whether the congressional elections might need to be delayed in order to accommodate the court-ordered redistricting. Looming over all of it is the US Supreme Court, which could put a stay on the lower court’s decision and bring the whole mad dash to an end very quickly.

North Carolina Republican leaders accused the federal court’s decision of introducing “unmitigated chaos” to the state’s 2018 elections — and while they are surely peeved at the thought of losing congressional seats, they aren’t wrong in thinking the court has upended the 2018 landscape in North Carolina and nationwide.

As Vox’s Ella Nilsen previously explained, North Carolina was already forced by a 2011 Supreme Court decision to redraw its congressional districts because they were found to be illegally gerrymandering the state’s maps along racial lines.

The Republican-controlled legislature’s solution? An explicitly partisan, but not racial, gerrymander that packed Democrats (but, ostensibly, not black North Carolinians) into as few House districts as possible.

North Carolina is a purple state. Politically, the state is about 50 percent Democrat and 50 percent Republican — it went for Barack Obama in 2008 but for Republicans in 2012 and 2016 (although voters elected Democratic Gov. Roy Cooper). In a competitive election year like 2018, Democrats should have the opportunity to pick up plenty of congressional seats.

But if you look at its congressional maps, Republicans have an incredibly lopsided advantage. That’s intentional; Republican state Rep. Dave Lewis admitted as much in 2016, during the redistricting process.

“I propose that we draw the maps to give a partisan advantage to 10 Republicans and three Democrats, because I do not believe it’s possible to draw a map with 11 Republicans and two Democrats,” Lewis said at a state House hearing.

Common Cause and the League of Women Voters NC sued again over the new maps, arguing that the new districts still represented an unconstitutional partisan gerrymander. The Supreme Court had previously sent the case back down to the lower courts, stating that the plaintiffs needed to show they had standing to sue over the maps.

A divided three-judge federal panel found this week that the plaintiffs did have standing and the North Carolina districts were unconstitutional. (Notably, the standing issue is what caused the Supreme Court to throw out a partisan gerrymandering case in Wisconsin this year.)

“The Constitution does not allow elected officials to enact laws that distort the marketplace of political ideas so as to intentionally favor certain political beliefs, parties, or candidates and disfavor others,” the judges wrote in their ruling. “It runs afoul of the Government’s constitutional duty to ‘treat its voters as standing in the same position, regardless of their political beliefs or party affiliation.’”

“That is precisely what the Republican-controlled North Carolina General Assembly sought to do here,” the district judges ruled.

The district court did not offer a specific prescription to fix the constitutional problem. It floated the possibility of having the state redraw new maps ahead of November or having a third party do so. It also indicated that North Carolina could forgo primary elections for the new districts and simply hold a general election with a runoff if no candidate received 50 percent of the vote.

The first question is whether the Supreme Court will allow any redistricting to go forward. North Carolina GOP leaders told WFAE that they expected to ask the nation’s high court to stay the district court decision, which would postpone any further litigation and allow the 2018 elections to go forward with the current maps.

With Justice Anthony Kennedy having vacated his seat and Trump nominee Brett Kavanaugh not yet confirmed, the Supreme Court is currently evenly divided, 4-4, between liberals and conservatives. In the event of a 4-4 split at the high court, the lower court ruling would stand and new districts could potentially be drawn if the district court so orders.

Rick Hasen, an election law expert at UC Irvine, noted, however, that liberal justices Stephen Breyer and Elena Kagan might be receptive to the argument that it is simply too late in the election season to draw new maps before the general election. From Hasen:

Justices Breyer and Kagan could agree that it is too late and agree on an order to delay this until the Court can consider the issue as a whole next term and before the 2020 elections. So the key to this is Breyer and Kagan, I think, and I’m not sure how they will go.

It is also possible the district court itself decides any redistricting should be postponed until after the November elections, Hasen told me. While the judges raised the possibility of ordering new maps ahead of the upcoming elections, they have yet to actually issue an order for North Carolina to draw them.

In the meantime, state officials are scrambling to figure out how they would draft new maps and set up elections for new districts in a matter of months.

“We are still working through what scenarios would require special federal intervention,” Joshua Lawson, an attorney for the state elections board, told WFAE.

The state Democratic Party chair suggested postponing the elections. Others have raised the possibility of holding new primary elections in November and general elections in December.

The truth is, as the calendar prepares to turn from August to September, we don’t know what’s going to happen with North Carolina’s congressional districts. But we can guess that if new maps are drawn, they will benefit Democrats. FiveThirtyEight’s Nate Silver suggested that one or two new seats would be in play with new districts.

If North Carolina were required to redistrict, would be worth another ~2 seats or so for Democrats. Although with a high margin for error because of all of this happening at such a late date. https://t.co/uSQZ9IsPyX

“The great unknown is, how are the maps drawn? I think certainly Democrats can pick up more seats than their current three, but the great mystery is how will the districts be drawn and which areas are included?” Michael Bitzer, who leads the politics department at Catawba College, told me. “In general, though, I do think Democrats would benefit greatly from new maps.”

Cook Political Report already rates four of the North Carolina House races as competitive. With new maps, North Carolina would quickly become one of the most critical states in the Democratic pursuit of a House majority. Democrats need to win 24 seats to win control of the lower chamber from Republicans.

Trump has been the biggest source of Covid-19 misinformation, study finds
Attention has faded on the more than 20 sexual misconduct allegations against Trump
Watch: Alex Jones and Marco Rubio nearly come to blows in the Senate hallway
The pandemic is an extraordinary opportunity to reform US education
“They should have reacted faster”: 6 Covid-19 survivor stories from around the world
The dark side of going viral