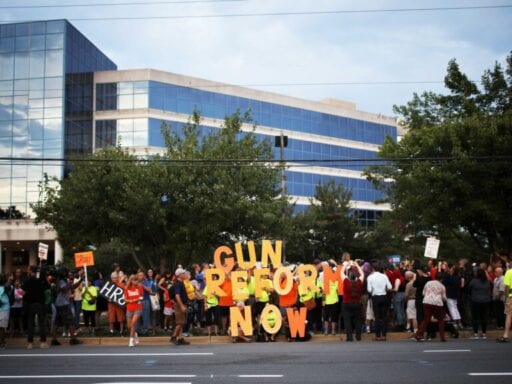 Share
Loading...
Advocates of gun reform legislation hold a candlelight vigil for victims of recent mass shootings outside the headquarters of the National Rifle Association in Fairfax, Virginia, on August 5, 2019. | Win McNamee/Getty Images

The nation’s most powerful gun rights organization was dramatically outspent in Virginia in 2019 by gun control organizations, helping Democrats gain control of the state legislature for the first time in more than two decades.

According to the Virginia Public Access Project, the National Rifle Association spent $350,269 this cycle to help pro-gun rights candidates beat back Democrats who were running on a gun control platform, one that became particularly poignant after a mass shooting in Virginia Beach on May 31 left 12 people dead. (An NRA spokesperson cautioned that total spending numbers for the organization will not be available until later this month.)

But gun control groups spent far more, hoping to help get Democratic candidates into office who could push forward a package of proposals aimed at stemming gun violence, including background checks on all firearms sales and a ban on so-called “assault weapons.” Everytown for Gun Safety Action Fund and Everytown for Gun Safety Victory Fund (backed in part by former New York City Mayor Michael Bloomberg) report that they spent $2.5 million in Virginia, making the group the biggest outside donor in the race — and Giffords PAC, named for former Rep. Gabby Giffords, spent $300,000 on a digital ad campaign alone.

Democrats didn’t win either the House of Delegates or Senate seat for Virginia Beach, but across the state, gun control was the top issue for voters and for Democratic candidates, according to one poll, with several candidates running explicitly on vows to “take on the NRA” to pass gun control legislation. According to Everytown, that focus (and money) resulted in at least three flipped seats that helped Democrats take control of the legislature. Gov. Ralph Northam said Wednesday that he now hopes to be able to pass a slate of gun control measures, and “because of that Virginia will be safer.”

The gun control push in Virginia comes as the NRA is perhaps in its weakest position in years, the result of lawsuits and an investigation by New York State officials that has put the organization’s finances under a microscope. In draft remarks to reporters, Everytown CEO John Feinblatt said Wednesday, “NRA is a paper tiger.”

He added, “The NRA may be based in Fairfax, Virginia, but we outspent them in Virginia by 8-1. In other words, the NRA couldn’t defend its own backyard.”

On May 31, 2019, a public utilities employee walked into a Virginia Beach Municipal Center and shot more than a dozen people both inside and outside the building, killing 12 and injuring four others before dying in a firefight with police. In a press conference after the shooting, Virginia Beach Mayor Bobby Dyer described the attack as “the most devastating day in the history of Virginia Beach.”

In response, Virginia Gov. Ralph Northam called a special session of the Virginia legislature and put forth eight proposals aimed at tightening the state’s gun laws, including a ban on silencers and so-called “assault weapons,” limiting handgun purchases, and creating a Extreme Risk Protective Order so that law enforcement could take firearms from people deemed to be potential threats (a proposal the NRA voiced support for in March 2018.)

But as my colleague Catherine Kim reported earlier this year:

When the legislature convened, the GOP shut down the meeting in less than two hours. The group refused to address gun control, saying that not enough research had been conducted on the appropriate legislative direction prior to the “premature” session, and suggested Virginia do what it did after the 2007 Virginia Tech shooting, when then-Gov. Tim Kaine, commissioned a blue-ribbon panel to study mental health and gun control. The legislature ultimately passed some of the panel’s recommendations.

Virginia has comparatively loose gun laws — the state permits open carry and does not require a permit to purchase or have a rifle, shotgun, or handgun, but it does regulate gun shows. The Giffords Law Center, which supports gun control measures, gave the state a “D” rating for its existing laws. (It’s worth noting that Guns and Ammo Magazine, which supports a maximalist interpretation of gun rights, ranked the state No. 31 in the country, noting efforts by Democrats to pass gun control legislation.) And the majority of Virginia Republicans in the legislature received “A” grades from the NRA.

The Republican-controlled legislature ultimately took no votes on either the measures proposed by Northam or those put forward by other Virginia lawmakers, a decision Northam called “shameful and disappointing,” particularly since the legislature would not be reporting back to work until November 18 — several weeks after the election.

In response, gun control organizations made Virginia a priority, particularly as all 140 legislative seats in the increasingly blue state were up for grabs this cycle. That — plus recent redistricting due to unconstitutional racial gerrymandering of congressional districts — made flipping both the Virginia House and Senate a real possibility. In his remarks, Feinblatt said, “There’s no question about it: What happened in Virginia Beach — and most importantly, what didn’t happen afterwards — set the stage for this election.”

The NRA lost big in its home state

The NRA argued that, in this race, it emphasized donor contact and get-out-the-vote efforts rather than big donations. In comments to the Washington Post in September, NRA spokesperson Catherine Mortensen said in part, “The Bloomberg and Everytown/Moms Demand lobbyists may outspend the NRA, but they will never outwork us.”

But that wasn’t the case just two years ago, when the gun rights group spent more than $2 million in the state, including a $750,000 advertising buy aimed at lifting Republican gubernatorial candidate Ed Gillespie. That was a race with statewide offices at stake, not legislative ones, but it’s still a good indication of how much the NRA cared about defending gun rights in the state: $2 million was bigger than the NRA’s in-state spending in any of the three previous cycles, according to the Virginia Public Access Project.

As I’ve been reporting, the NRA — still powered by its 5 million members and a close relationship with the White House — has been struggling both politically and financially. The group was largely unable to get much of its legislative agenda through Congress while Republicans held total control in 2017 and 2018, and revenue drops resulted in less available cash to spend in the 2018 midterms.

The NRA’s revenue from membership dues — a one-year membership costs $45 — has dropped 21 percent since 2016, from $163 million to $128 million, according to the nonpartisan transparency organization OpenSecrets. Other donations to the NRA dropped too, from $128 million in 2016 to $98 million in 2017. That revenue drop has led to cost-cutting measures across the organization, from raising the cost of dues to dropping free coffee and water at its Fairfax, Virginia, headquarters to major layoffs at the group’s media outlet, NRATV.

But most importantly, the revenue drop dramatically impacted how involved the NRA got in the 2018 midterm elections. The group got involved in about half the races in 2018 that it did during the previous midterm cycle, and the amount it spent dropped as well — from $25 million in 2014 to less than half that this cycle.

That revenue drop came as the result of massive spending in the 2016 election to get Donald Trump in the White House. And the challenges facing the organization go far beyond revenue. Coupled with a federal investigation into the group’s ties with Russian entities, the NRA has faced the loss of one of the group’s top lobbyists, Chris Cox; a lawsuit filed against New York State over an insurance program aimed at helping NRA members who are involved in self-defense shootings; and another series of lawsuits filed against the NRA’s former advertising and public relations firm, Ackerman McQueen.

As I reported a few weeks ago:

The lawsuits have already proven deeply embarrassing to both the NRA and to Ackerman McQueen, and cost both entities millions in court costs. For Ackerman, the NRA was once the firm’s most prominent and lucrative client; now the firm is facing a lawsuit that could cost it millions. And for the NRA, the allegations — high-spending executives, accusations of sexual harassment, and an overall lack of oversight — have damaged the group’s reputation among some gun rights supporters. Even President Donald Trump has urged the NRA to “get its act together,” and the allegations against LaPierre have riled prominent members of NRA’s leadership.

If Tuesday’s results in Virginia are any indication, however, America’s largest gun lobby did not “get its act together.” In a statement on the election, the NRA argued that Virginians would ultimately reject gun-control candidates and concluded, “As the battle continues, so does the NRA’s defense of the Second Amendment rights of all Americans.”

But the lawsuits, investigations, and loss of funding have all been a massive distraction for the NRA, and gun control organizations are taking advantage. In Virginia, those organizations have helped shift the balance of power in the state legislature and, with it, hope to push for gun control legislation in a state that houses the country’s biggest gun rights group.