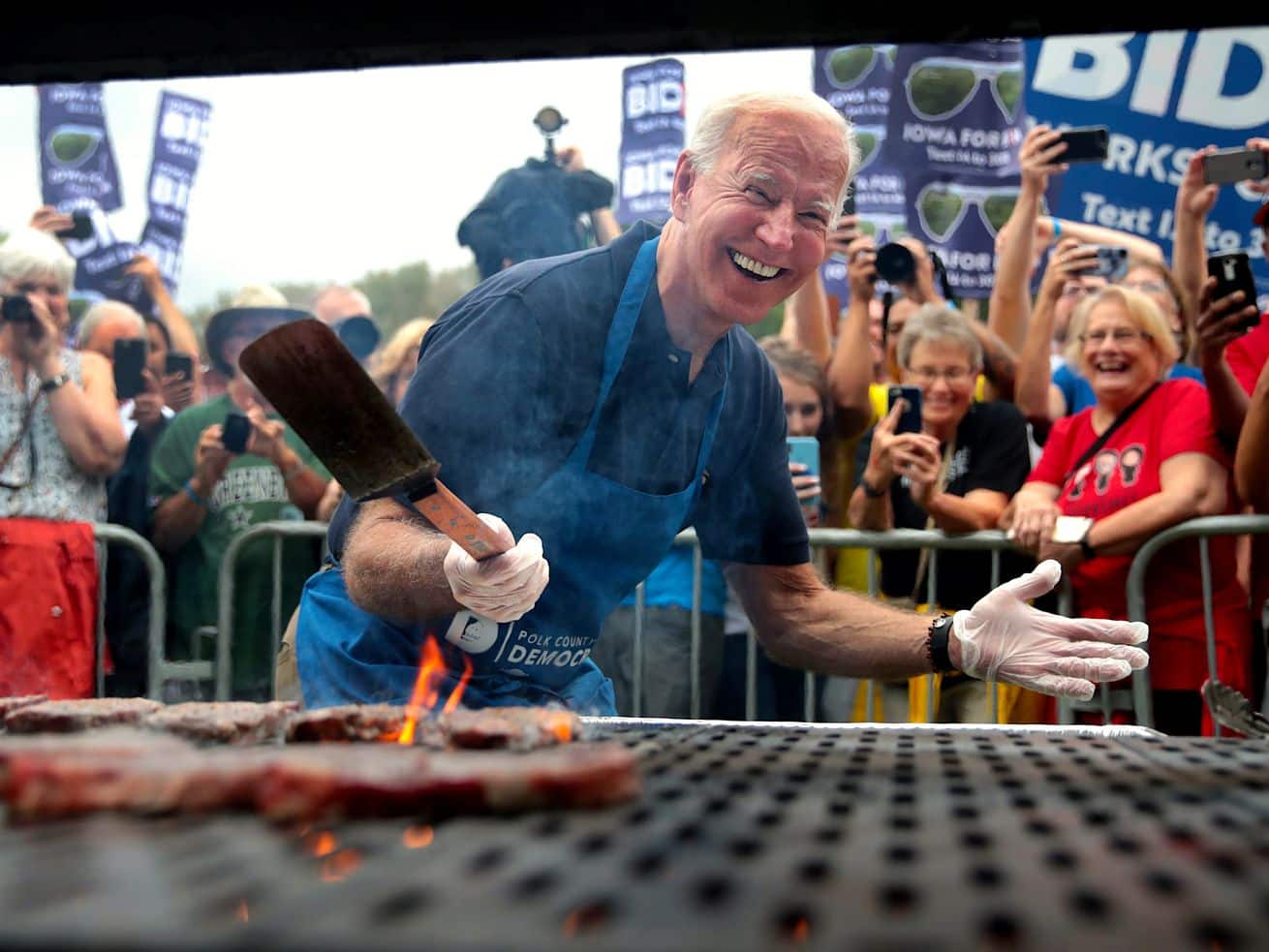 There’s a burger-shaped hole in it.

President Joe Biden has a plan to tackle climate change. His major infrastructure program, the American Jobs Plan, is mostly a blueprint for doing just that. It’s exhaustive — the summary alone clocks in at 12,000 words — and that’s encouraging. But in all those words, something crucial is missing.

If Biden is serious about staving off climate disaster, our meat system is not something he can afford to ignore. At least 14.5 percent of global greenhouse gas emissions comes from animal agriculture. That’s largely because ruminant animals like cows emit a lot of methane, and producing feed requires using energy and clearing forests that would otherwise be trapping carbon.

The US plays an outsized role in all of this.

“If US agriculture was its own country, it would be the 14th biggest emitter in the world,” said Richard Waite, a senior research associate at the World Resources Institute, an environmental research organization. “We can’t get to where we need to be on climate if we don’t also address our agricultural system.”

Fixing our meat system is also critical for preventing future pandemics, another goal in Biden’s American Jobs Plan. Factory farms, the huge industrialized facilities that supply 99 percent of America’s meat, overcrowd animals by the thousands in unsanitary conditions that cripple their immune systems and make them vulnerable to disease — which could all too easily set off the next pandemic.

Although the Biden administration did announce a vague new initiative “to accelerate global agricultural innovation through increased research and development,” it has so far neglected to address the problems with factory farming.

And there’s a likely political reason why. Meat-eating has become ensnared in the country’s culture wars. A false tabloid-fueled rumor that Biden was looking to ban burgers recently caused an apoplectic reaction among Republicans. Imagine the backlash if Biden were to actually advocate for cutting subsidies to the meat industry, requiring factory farms to report and reduce emissions, or phasing out factory farms altogether.

“I think those kinds of policy options are less viable in this era of meat-as-culture-war-object,” said Alex Smith, an analyst at the Breakthrough Institute, a California-based environmental research center. What he suspects might work is “more carrot and less stick.”

Even as the Biden administration should fight the uphill battles, it should also make a strong push for investment in food and agriculture R&D that can set the food system on a sustainable path. Such a push would arguably encounter less resistance.

There’s a clear parallel here with the rise of green tech. In the fight against the climate crisis, government-seeded innovation has played a critical role, leading to a boom in solar and battery tech and electric cars. Biden has a similar opportunity now to accelerate food and agriculture tech — and it would cost relatively little, at least compared to the scale of his broader agenda.

An R&D agenda to scale up plant-based food research and explore improvements in how we grow plants and animals won’t solve climate change by itself. But it should be part of a multi-front fight against the defining crisis of our time.

It’s time to invest in R&D for meatless meat

For decades, the US government has been pouring money into the meat industry. That funding effectively built the industry into what it is now. For example, take the “Chicken of Tomorrow” program, which aimed to breed chickens that would grow faster and have larger breasts. It was organized by the Department of Agriculture in the 1940s, and it led to the development of the contemporary broiler chicken, the kind many people eat today.

Now, some argue that the government should do the same thing — but for the meatless meat industry.

Companies like Beyond Meat and Impossible Foods have ushered in a new generation of plant-based meats. They don’t quite taste exactly like real meat, but they’re close enough. Meanwhile, other companies are working on developing lab-grown or “cell-based” meat. We can expect that to taste exactly like the real thing because it’s grown from real animal cells. The downside is that it’s still astronomically expensive to produce.

The Biden administration could help accelerate alternative meat technology by investing in R&D. Right now, private investors may not want to take on the financial risk of looking for truly innovative new tech, which could take years to pay off — but a big infusion of public cash could make the field feel more like a sure bet.

“The motivation for real technological innovation in this space may not exist for private investors in the same way that it could exist for public investment,” Smith said, adding that the sector needs new tech because the industrial process that Impossible Foods and Beyond Meat currently use is very high-energy and high-cost. That cost trickles down to consumers, who find that the meatless meat in grocery stores is still more expensive than regular meat.

Public funding could catalyze researchers to find lower-energy and lower-cost ways to make meatless meat. It could also help them figure out how to improve taste and texture by identifying better ingredients.

Most research on alternative meats is currently being done by startups that keep their findings private, because a lot of a startup’s value can lie in the intellectual property it holds. But Biden could direct public R&D funding to academics who would generate a lot of open-access research, which would then benefit everyone in the field, from startups to established meat companies looking to get into the alt-meat game.

This wouldn’t require much money from the Biden administration. The Good Food Institute, a nonprofit that promotes alternatives to meat, says carving out $2 billion for R&D would enable the field to make big advances. Compared with other government spending (Biden’s infrastructure plan comes in at $2 trillion), that’s pretty cheap.

We know from past experience that smart government spending is crucial to moving America in a more climate-friendly direction. On the energy front, it’s already helped bring down the cost of solar panels by a significant margin. It can — and should — help on the food front, too.

“What we want is the equivalent of DARPA but for agriculture”

As great as it would be to make meatless meat cheaper, tastier, and more popular, it’s not going to fully replace real meat anytime soon. So it makes sense to also think about ways to improve conventional animal agriculture.

Here, too, more support for R&D could be helpful. There are potentially promising technological innovations we’re missing out on because they’re understudied. The Biden administration’s recent announcement of a new initiative “to accelerate global agricultural innovation through increased research and development” is vague, and experts would like more clarity on what the initiative’s targets will be.

“There are a bunch of things that we think could reduce emissions and increase output at the same time — like, for example, maybe red algae,” said Tim Searchinger, a senior fellow at the World Resources Institute. He was referring to the possibility that feeding cows a particular type of seaweed could reduce their methane emissions (though he acknowledged there’s skepticism on this front and more data is needed).

“The first thing you’d do if you were serious about this is you’d have 100 large-scale tests going on across the country for two years,” Searchinger said. “Instead, we have this one really nice guy at the University of California Davis running one little research project after another. We shouldn’t depend on one guy at one university!”

He drew a comparison to DARPA, the Defense Department’s advanced research agency, which receives billions of dollars annually to devote to R&D for emerging technologies. (DARPA research helped lead to the invention of the internet, among many other innovations.) “What we want is the equivalent of DARPA but for agriculture.”

Smith echoed that wish and argued that it would be perfectly politically viable for Biden to incorporate more agricultural R&D funding into upcoming legislation such as the next Farm Bill.

Chloë Waterman, a program manager at the environmental organization Friends of the Earth, agreed that the US needs to dramatically boost its agricultural R&D. But she noted that we don’t only need new technological know-how — we also need economic research into how to effect a “just transition” to more climate-friendly farming.

“I’d want research around animal agriculture to be pointed toward the ‘how,’” she said. “How do we successfully transition farmers who are engaged in factory farming to do different types of agriculture? What are the best fits? What are going to be the most economically viable alternatives for them to transition toward?”

Waterman added that there are also helpful changes the Biden administration can make immediately, like directing more of the USDA Foods budget to buy plant-based food for schools (right now much of it goes to meat and dairy purchasing). “I think there’s a huge missed opportunity around leveraging the government’s food procurement,” she said, adding that giving contracts to plant-based companies would send a message to investors that there’s a reliable market for that type of food.

But she is skeptical that relying on carrots rather than sticks can help the US fix its food system at the speed demanded by the climate emergency — which speaks to the broader idea that the fight against climate change will need to be a multi-front battle. Politically unpopular or not, she argued, the Biden administration needs to regulate the meat industry — by compelling it to report and reduce emissions, for starters — rather than counting on it to make voluntary changes as new technology or new contracts become available.

“This is the determinative presidency of whether we can fend off the worst impacts of climate change, so we can’t afford to be working around the edges,” she said. “We need to say: ‘This is an industry that is fueling climate change, and we have to transition away from it.’ Unless we really bite that bullet, we’re not going to be successful.”

American democracy’s Senate problem, explained
Let a harried handywitch steal your heart and teach you practical magic in this charming audio drama
Apple and Google want to turn your phone into a Covid-tracking machine
Bernie Sanders wins the Northern Mariana Islands caucuses
How the pandemic forced mental health care to change for the better
State Dept. on immigration, Kim Jong Un in China