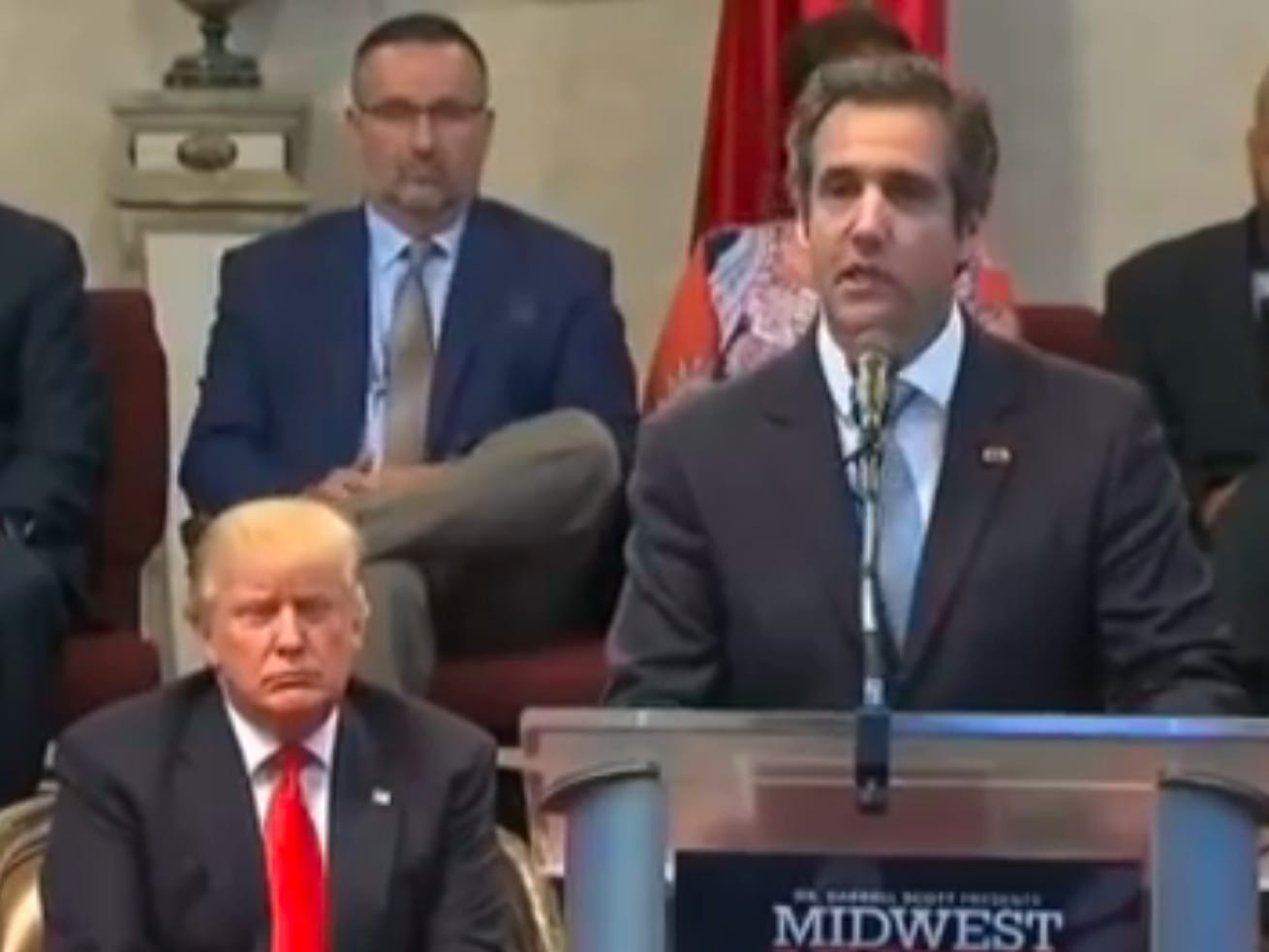 The debate over indicting presidents, explained.

Michael Cohen, the former personal attorney for President Donald Trump, has pleaded guilty to eight criminal charges. two of which are campaign finance offenses involving his payment of hush money to Stormy Daniels and Karen McDougal, two women who say they had affairs with Trump.

Strikingly, Cohen admitted in court that he worked “in coordination with and at the direction of a candidate for federal office” to make one payment; the other was made merely “in coordination with” the candidate. While Trump wasn’t named, that effectively implicates him in the underlying crimes here: willfully causing an illegal corporate contribution and making an excessive campaign contribution.

Several law professors told my colleague Sean Illing that if Cohen’s account can be proven, it means Trump himself is guilty of federal crimes. “Although the president is not named in the charges, he is all but an unindicted co-conspirator,” Duke’s Lisa Kern Griffin told Illing.

Today he stood up and testified under oath that Donald Trump directed him to commit a crime by making payments to two women for the principal purpose of influencing an election. If those payments were a crime for Michael Cohen, then why wouldn’t they be a crime for Donald Trump?

“Trump is clearly guilty of violating campaign finance laws and also guilty of federal conspiracy as well (because he agreed with Cohen, and possibly others, on a plan to violate federal law),” Cornell’s Jens David Ohlin added to Illing. “Normally he would be indicted right away. But that won’t happen only because he’s the president.”

That last part — that Trump is only not being indicted because he’s the president — is tremendously important. The conventional wisdom is that even if Trump committed federal crimes, only Congress can address that wrongdoing by impeaching him. The prevailing view, embraced by the Justice Department’s Office of Legal Counsel and many legal academics, is that the president is immune from routine criminal prosecution by someone like a US attorney or a local district attorney. He could be charged for wrongdoing as president after leaving office, but not until after impeachment and removal, or resignation.

The thing is, though, this has never been tested before. And some legal scholars, like Hofstra University’s Eric M. Freedman, have argued that rank-and-file prosecutors can indeed indict and prosecute the president. It might be difficult for, say, the deputy US attorney for Southern New York who prosecuted Cohen, Robert Khuzami, to test the president’s immunity by securing an indictment. Trump could simply dismiss Khuzami from their post (US Attorney Geoffrey Berman has already recused himself from the Cohen case).

But state and local prosecutors don’t serve at the president’s pleasure the way US attorneys do. They’re typically elected or appointed by state or local politicians. So if Trump were to, as he’s jokingly threatened in the past, “stand in the middle of Fifth Avenue and shoot somebody,” then New York County District Attorney Cyrus Vance Jr. could indict him for assault or murder without fear of losing his job.

The case would be immediately appealed, and the question could be settled once and for all, most likely by the Supreme Court.

“If they did seek an indictment against the president, the president would almost certainly appeal right away,” Brian Kalt, a law professor at Michigan State University and author of Constitutional Cliffhangers: A Legal Guide for Presidents and Their Enemies, told me in 2017. “Immunity arguments get reviewed right away, since the point of immunity is that you can’t be prosecuted — letting the trial go forward would moot the issue. It would go all the way up to the Supreme Court in short order, but that could delay things for a few months at least.”

“While I personally think the president is immune while in office, I concede that there are arguments on both sides and that it is unsettled,” Kalt continued. Now, with Trump, there’s a small but real chance that the Supreme Court might finally settle the matter.

The cases for and against presidential immunity

The most famous argument that presidents should be immune from ordinary criminal prosecution was made in a 1997 law review article by Yale constitutional law professor Akhil Amar and Kalt, his then-student.

Amar and Kalt argue that the president is a unique official, as the sole person ultimately in charge of the executive branch. “If he is arrested, so too is the executive branch of the government,” they write. This distinguishes him from a normal legislator or judge, who can be prosecuted, because there are plenty of other judges and legislators who can carry on their work. “Any distraction of the President from his duties is much more significant than similar distractions of these other, prosecutable officials, and has a much bigger impact on the well-being of the nation and all its People,” they conclude.

At the state level, they pointed to the landmark 1819 case of McCulloch v. Maryland, which ruled that state officials cannot obstruct “the measures of a government [the federal government] created by others as well as themselves.” “In other words,” Kalt and Amar summarize, “a single state cannot use its power to derail the functioning of the United States.”

A federal prosecution would similarly illegitimately impede the function of the presidency, and put an inferior executive officer, like a US attorney or independent counsel, in charge of prosecuting the president. The president could simply fire either one, rendering the point largely moot.

”If the President freely allows his regularly appointed lieutenants to pursue him, then there is no separation of powers problem,” they write. But if the president refuses to let that happen, he’s in his rights as the leader of the executive branch to dismiss either a US attorney or an independent counsel prosecuting him.

In a 1992 law review article later adapted into testimony during the Clinton impeachment imbroglio, Hofstra University’s Freedman took the opposite stance. There was explicit disagreement, he writes, among the founders about whether the president was immune from prosecution, disagreements that reached the floor of the very first Senate ever convened. So the issue can’t be resolved by recourse to the Constitution’s original meaning.

Second, historical practice is that every other federal officeholder, including the vice president, has been considered eligible for regular prosecution. After Vice President Aaron Burr killed Alexander Hamilton, he was indicted for murder in both New York and New Jersey. “Amid the considerable public tumult that followed, there was never any suggestion that he had any immunity from prosecution on these charges,” Freedman writes.

Moreover, in the Watergate case, the Iran-Contra investigation, and Bill Clinton’s impeachment saga, subpoenaing the president was considered unquestionably legal and appropriate.

”The question of how to enforce a criminal sentence against the President is no different than the question of how to enforce a subpoena against the President,” Freedman writes, and subpoenas against the president have been enforced in the past. To this point, Kalt counters that the special prosecutor in the Watergate case “didn’t think they could indict [Nixon] while he was in office, which is why he was named as an unindicted co-conspirator.” That suggests that indictment and subpoenas might be different.

If the president is given a sentence like prison that precludes him from carrying out the duties of his office, Freedman argues that his Cabinet and vice president could use the 25th Amendment to suspend his presidency, or the president could invoke the amendment voluntarily for the length of his sentence.

If the president were in prison and still insisting on performing his duties from there, two-thirds of members in the House and Senate would need to ratify the vice president stepping in as acting president. But it’s hard to imagine a situation where the president is literally in prison and Congress doesn’t assent to that.

The best way to test this? Have some prosecutor try it.

In Freedman’s view, the best way to prosecute Trump would be to revive the independent counsel statute passed after Watergate. That statute led to the appointment of Kenneth Starr to investigate Clinton’s Whitewater land deals, which culminated in the impeachment effort. It expired in the late ’90s, partly as a consequence of fatigue from the Clinton investigations.

“As a practical matter, what you need at this point is for Congress to revive the independent counsel,” Freedman told me in 2017. “No one in the Justice Department chain of command will do it, not just for the obvious reasons but because the Justice Department has an official position of longstanding that it can’t be done.”

Kalt agreed: “Based on internal precedents, I think that most any US attorney would stop short of seeking an indictment against the president.” He adds, “They can do a lot short of that, though — investigating the president, indicting underlings, etc. — in an attempt to tee things up for the day the president leaves office.”

I asked Freedman if an independent counsel would have the authority to bring charges against the president. “He plainly could,” he replied, noting that the independent counsel statute specifically said the counsel can only be removed for cause. “Under the then-statute, which was upheld as constitutional, such an indictment would not be a cause for firing him.”

Amar and Kalt, in their article, argue the contrary, that it’s clearly within the president’s power to fire an independent counsel for whatever reason, and that the Supreme Court’s prior ruling on the office didn’t say otherwise.

But in any case, Congress would have to revive the independent counsel statute before any of this could happen. So far, there’s little indication that Republican leadership is open to that. Even if they did, Kalt noted, “the president would presumably veto it, and if they have the two-thirds majorities in both houses that they would need to override the veto, they presumably would have the votes (a lower threshold in the House) for an impeachment and removal.”

A state prosecutor, Freedman argued, could also bring charges. “The president could by statute remove to federal court,” he explained. “There, or even if it stayed in state court, the immunity issue could be brought up rapidly pretrial. The Nixon case itself is an example of how this could work.”

While it seems pretty likely that Trump violated federal law by instructing Cohen to make illegal payoffs, the potential charges against him in, for example, New York and Florida are less obvious. The campaign finance violation is a federal, not state, offense.

But the state option does provide a path for the Supreme Court to ultimately settle this question. If a state or local prosecutor concludes that Trump broke a law, they could secure an indictment and finally force the courts to come to a decision about whether presidents can be indicted and prosecuted.

Trump’s plan to reopen America can’t work without a massive surge in testing
Sorry, but Democrats need to talk about Hunter Biden
Vox Sentences: What happens in Finland stays in Finland
What is private equity, and why is it killing everything you love?
Turkey’s invasion in Syria is creating even more refugees — just as the US shuts the door
After six months and $1.8 billion, Quibi wants a new owner. That will be a hard sell.