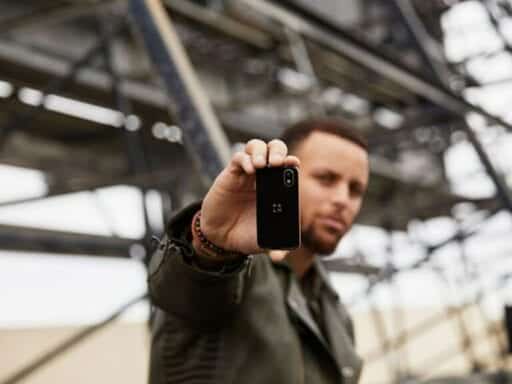 The only thing that can protect you from your gadgets is more gadgets.

This fall — better known as “this holiday shopping season” — there are as many things to buy as ever, but newly, there are plenty of things to buy that have the express purpose of preventing you from looking at a screen.

If you’re worried about the current arrangement in which you’re addicted to your phone and paying for all of your services with attention instead of money (well, in addition to money), further entwining yourself and your phone, barely able to decipher where you end and your phone begins, they promise a solve.

Last week, there were the click-bait “IRL Glasses,” which raised $112,000 against a $25,000 goal on Kickstarter and are set to eventually retail for $79 a pop. Just a novelty, or “concept piece,” even in the words of their creator, the glasses can block the light coming from LED and LCD screens and therefore put the wearer in a world free of (digital) billboards and (some) TVs.

Phones and computers and TVs with OLED displays (which are still a little high-end, but increasingly popular) will still get through, but the idea is mostly just to call attention to the way Silicon Valley has taken over our lives.

Designer Ivan Cash told Wired that IRL Glasses are an idea borrowed from John Carpenter’s 1988 sci-fi cult classic They Live, which is centered around a pair of sunglasses that reveals secret messages from aliens who order humans to “obey,” “consume,” and “conform.” Get it? Just swap a space creature for an Instagram influencer, an overlord for Mark Zuckerberg.

The former was shown at Panasonic’s Future Life Factory booth at the Consumer Electronics Showcase in Las Vegas this January — billed as a solution for open coworking spaces where stimuli are seen as an anti-productivity disease — and is essentially a flexible pair of blinders with noise-cancelling headphones inside. Before you ask: This device absolutely does makes the wearer look like a horse, despite the fact that they were made with the help of Japanese high fashion designer Kunihiko Morinaga.

The idea is that by physically forcing yourself to look straight ahead and listen to nothing, you’ll focus on whatever’s in front of you. The idea is also to sell the blinders for 35,000 yen (about $313), though the crowdfunding campaign is only about 52 percent to its goal. (It’s buzzing on social media right now because it was picked up as a “news” item by the streetwear and general consumption enthusiasm blog Hypebeast.)

But more interesting is the Palm: a tiny, limited-use phone, available next month for $349.99 exclusively through Verizon, and exclusively as a companion phone to a larger, more advanced phone. (You have to hook it up to a phone number that’s already in use.)

The Verge’s Dieter Bohn describes it as “a sidecar for your phone,” “designed for you to use on the weekends, when you’re going out for the evening, or just generally when you want to be a little less distracted by your big phone with all its apps.” Bohn also points out that the tiny Palm is technically capable of running any app from the Google Play Store. Presumably the backstop is that you’d just feel gross if you caught yourself trying too hard to spend oodles of time in Instagram on a rinky-dink device like this. (I mean, you can wear it on a necklace!)

In other words, our brains are pretty simple: the smaller screen means the colorful apps and notifications so carefully designed to hog your eyeball all day and night are not as fun to look at. With the new Palm, you’re forcing yourself to use something tiny, which is harder — struggling to look at them is supposed to remind you of what you are doing. You’re basically treating yourself like a child, enforcing limitations that will hopefully make you surrender to your own imagination and entertain yourself with human voices and interesting landscapes, or your muscles, or a book, or a sandwich, or whatever.

NBA star Steph Curry is involved in that he invested, and in that he designed some cases that let you affix the tiny phone to your forearm while you exercise. I am involved in that the idea of a phone “not much bigger than a credit card” is very appealing to me. However, as I mentioned — you can’t use this phone unless you have another, bigger phone.

The baby phone’s main attributes are that it is wee and precious, and that its battery will last for a very long time if you put it on “Life Mode,” which is a wellness-oriented cocktail of do-not-disturb, low battery, and airplane mode settings. The screen will stay dark; cellular data and Wi-Fi will stay off unless you actively engage with a phone that isn’t actively engaging you.

It’s expensive and you probably don’t need it. I’m just bringing it up because it’s a flashy answer to that common question: Are you addicted to your phone?

@stephencurry30 is not only an advisor and investor, but he is also active in designing and testing accessories.

Apart from being common, this is also probably the most boring question I can fathom asking. It hints both at inter-generational hand-wringing and at complete uselessness, having honestly only one answer: Yes, of course, you are addicted to your phone. You are, I am, we all are, and not because we’re narcissists or idiots, but because everything on our phones was designed with that exact goal in mind.

Earlier this year, thinking about the proliferation of the little red notification badge in the corner of most of the apps you use every day, The New York Times’s John Herrman wrote, “The dot is where ill-gotten attention is laundered into legitimate-seeming engagement.”

The last year has been marked by panic about this fact: from giant tech companies faced with almost surreally huge PR problems, from journalists who do things like start a Google Pixel 3 review with “We are captives to our phones, they are having a deleterious effect on society, and no one is coming to help us,” and from individual gadget creators and platform designers, who have suddenly felt compelled to step forward and publicly apologize for doing all this to us (some sincerely and some probably because of book deals).

Apple introduced Screen Time with iOS 12 in September, a feature that provides you with detailed information about how much time you are spending in various apps, meant to be used in conjunction with App Limits and Downtime — new settings that let you set hard caps and restrictions for yourself. Boot yourself out of Snapchat after an hour, don’t let any Twitter notifications in after 10 PM, etc. Google has been testing a similar feature called Digital Wellbeing in public beta for the last six months, and Facebook and Instagram introduced their own time-spent dashboards in August.

Some individuals have tried more radical solutions: sabotaging their devices’ attention-grabbing tricks by only using them in grayscale, or paying $100 a day to hang out in the woods in Sweden, giving up technology completely, in favor of attempting to answer the question, “What if the culture you grew up in was broken in ways that you didn’t even have words for?” And the hunt for a good minimalist phone is perpetually on.

“Is it possible to reform profit-driven systems that turn attention into money?” Herrman asked in February. “In such a business, can you even separate addiction from success?”

This batch of new gadgets, laughable as they are and unscalable as they may seem, certainly represent one attempt at doing just that. If I were to mount a defense of a new consumer good — and it’s not often that I feel obliged to do so — I’d say they’re ham-fisted and obnoxious, but at least what you’re paying for them with is written right there on the box.

How Muslims are preparing to observe Ramadan during the coronavirus pandemic
We could shift to sustainability and save $26 trillion. Why are aren’t we doing it?
The alleged pipe bomb suspect’s van, explained
Vox Sentences: One step closer to Trump’s financial records
Corporate America would like the vaccine now
Hajj, the Islamic pilgrimage to Mecca, explained for non-Muslims