The pandemic seemed like the end for this bed-and-breakfast. Then locals started coming. 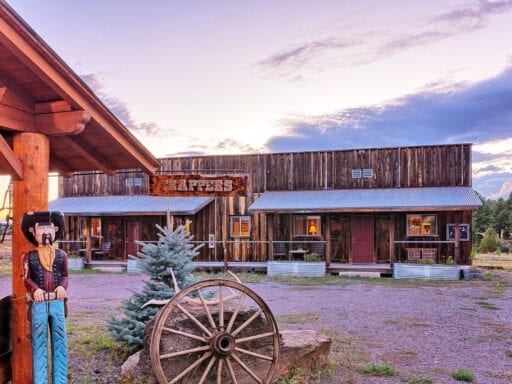 Trapper’s Rendezvous Bed and Breakfast was quiet for months due to the lack of international travel. Now it’s thriving.

When the pandemic first hit, bookings at Trapper’s Rendezvous Bed and Breakfast in Williams, Arizona, dried up seemingly overnight. That was a blessing and a curse for Emily and Matthieu Monnier, who have managed the property since last year. On the one hand, they were able to spend March and April riding bikes, fixing up the property, and soaking up the Southwestern sun at the kitschy, ranch-style hotel, located 30 minutes outside of Flagstaff. On the other hand, the Trump administration’s decision to freeze inbound flights from Europe and East Asia effectively put the Grand Canyon tourism industry in stasis. The majority of the hotel’s guests come from overseas, and the future of the Monnier’s employment was up in the air.

But since mid-May, they say, Trapper’s Rendezvous has been operating at near capacity. The couple, both in their 30s, have implemented their own sanitation measures — they offer contact-free check-in, they’ll leave your breakfast in your room overnight before you arrive, and they’ll dutifully scrub down the bedrooms and common areas during your stay — but neither the county, the state, nor the federal government ever offered a playbook for operating a hotel during a national shutdown. They just had to wing it.

Matthieu believes that the pandemic might end up being a blessing in disguise for Trapper’s Rendezvous. While their international bookings haven’t yet rebounded, the clientele has been replaced by urban-dwelling locals. Families and couples from California, Nevada, and the rest of Arizona, driven stir-crazy by social distancing, are looking to enjoy some wide-open spaces for one merciful weekend. It’s a brand-new revenue stream for the humble bed-and-breakfast, and the Monniers hope it persists long after the coronavirus recedes from the headlines.

How did the pandemic first hit you? What do you remember from those early days in March and April?

Emily Monnier: When the stay-at-home orders were placed, we got a ton of cancellations. We had a ton of bookings for spring break, and those were all wiped out. We had no idea if the hotel would stay open, or how long it would last, or if it would last through summer. It was filled with a lot of uncertainty.

Matthieu Monnier: We were getting the rooms all ready for the beginning of the season. All of a sudden, we were getting 10 phone calls a day for the next two months saying they wanted to cancel. But at the same time, there were people coming who were acting like nothing happened, and there were people who were overreacting, asking if we had put bleach all over every room, everywhere.

“I thought we would be shuttered by the government, but that never happened. There was no official information.”

I’m from France originally, so I was talking to some of my friends back home. They got on top of things so much faster. But Arizona was really taking their time closing the state. I thought we would be shuttered by the government, but that never happened. There was no official information. You’d hear one thing, and then the next day you’d hear something else. It was certainly an interesting time to be working in a hotel.

What was it like to keep the B&B open at the beginning of the pandemic? That seems like a weird time to be hosting guests.

MM: We had to modify the way we operate the hotel. We have a breakfast room, and we decided to, as much as we can, bring breakfast directly to their doors. We always try to do a contact-free check-in, we send an email with all the information about the room, and we can even leave breakfast in their room the day before they show up if they really want, which I totally understand. But obviously, the guests who are booking with us right now are the ones who aren’t that worried about Covid. A lot of them are not bothered by our precautions. They want to have breakfast inside, things like that. That was interesting to see.

Did you guys get any regulations handed down by Arizona or the US government about operating a hotel during a pandemic? Or were you flying solo?

MM: No, nothing. We didn’t have any information. I was quite surprised by that. There were no rules about hotels or B&Bs. You couldn’t go get a haircut, but you could go sleep in a room that somebody stayed in the day before. We got nothing from the county, the city, the state, or the country.

Did you feel like you were left in the dark?

MM: Absolutely. That was the main issue. You’d listen to two different shows and have two completely different pieces of information.

EM: I think a lot of people didn’t know how to handle the situation. People were struggling to do the best with what they thought was right. To have guidelines on, like, what a hotel should and shouldn’t do would’ve been welcome. We did what we thought was best. We cleaned all the blankets and linens and disinfected everything. But we could’ve just done everything as we did before. Nobody was making us do anything.

Was that scary from a financial perspective?

EM: The people who own this property have it all paid off. It’s an investment for them, they don’t need it. But we did get furloughed in April because there were so few bookings. Since we don’t pay rent and we have these accommodations, we felt okay. It was just a feeling of, “When can we get back to work again?” We have savings, and we weren’t worried for ourselves. Once May rolled around we got back to it.

How did the clientele shift in the past six months?

MM: Usually our clients are between 50 to 70 percent foreigners. People from China, Japan, all over the world. Those guests stay one or two nights. Otherwise, we get people from the East Coast who want to see the Grand Canyon. But that’s totally shifted this year. Eighty to 90 percent of our guests are from Arizona. And the others are from California and Vegas. That’s really interesting. We are serving a clientele that we’ve never served before. We have people who came in May who are now rebooking for later in the year. And I think business-wise, this has been good for us. We want people to come back. Instead of guests coming for 24 hours, driving out to see the Grand Canyon, and taking off, they’re now sticking around on the property. Kids are playing outside, families are having a barbecue, it’s a lot different for us to deal with. But I think it’s a positive thing.

Has anyone disrespected the social distancing rules you’ve set up?

EM: For the most part they’ve been respectful. They will share their opinion about not wanting to wear a mask and stuff like that, but they’ll still respect our rules.

MM: There was only one family who literally told us, “I don’t want to wear a mask and that’s it.” They’d only come for breakfast, where you can’t really wear a mask anyway. But otherwise, everyone is used to it. Especially because we’re now getting a lot of people from Phoenix, where you have to wear a mask if you’re going into a restaurant or something. They come here to have a good time. They don’t want to get into an argument.

How close are you to being back to full capacity?

MM: For the month of July and August, we’re pretty much on par with where we were last year. The locals have made up with everyone we lost internationally.

Before, we used to have more people during the week than the weekends because our international travelers came during the week. But now instead of having a steady flow, it’s like having 70 percent of our bookings on the weekend. Our weekends have been full since the middle of June.

Have you two had a moment where you were like, “It’s nice to be working a job where we’re out in the country during the middle of a pandemic?”

MM: Absolutely. We are very fortunate. We have this little property that has five acres. We can go outside, we can bike around, we’ve been extremely fortunate this whole time. I was talking to my friends who were stuck at home for months. I was telling them every day how lucky I was to be here. It’s been so much better.