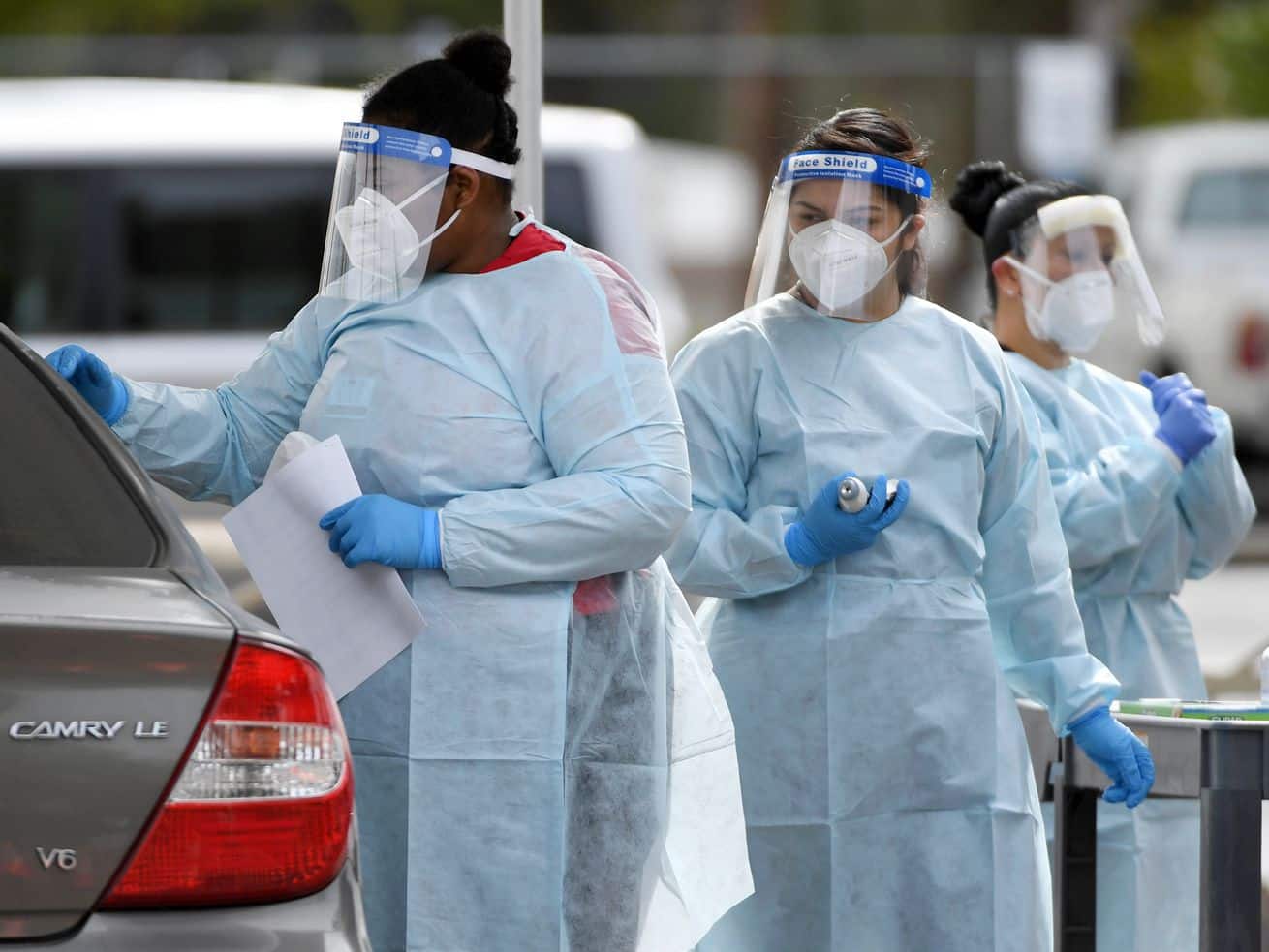 From lost job prospects to delayed licensing exams, many young people feel that their careers have been stymied by Covid-19.

Marisa Reynolds spent months anticipating the pandemic’s effects on her final year of medical school. Her clinical clerkship was delayed, and her research stint at the National Institutes of Health was canceled. So were parts of the fourth-year board exam Reynolds expected to take and the option to participate in an out-of-state clerkship — crucial opportunities students are typically afforded before applying for post-graduate residency programs.

“The pandemic is not something in our control, but it’s frustrating, to put it lightly, that it will have these long-term effects on our careers and lives for years to come,” said Reynolds, a Michigan State medical student seeking out internal medicine residencies. It’s a high-stakes process, and despite the logistical challenges that affected the quality of Reynolds’s and her peers’ application — such as late test scores and a shortened residency interview timeline — there is no option to try again next year.

She is also worried that the pandemic has made the process less equitable: Some students didn’t receive as many interviews as others, and there was limited time to make a strong impression on their program of choice.

“You’re basically entering a career marriage for the next however many years of your life,” she told Vox. “My internal medicine residency is about three years long, but for someone in neurosurgery, it could be seven years.”

For many young people, the pandemic has solidified their commitment to working in health care, even as it adversely impacts their career progression. The ongoing public health crisis might seem to benefit hospitals, or at the very least, job prospects for those in the medical industry. That couldn’t be further from the current reality, and young, entry-level workers are often the first to witness that.

The coronavirus has led many to reassess the risks and sacrifices that come with the job, and how consequential health care will be in a post-pandemic world. Simultaneously, people are recognizing the longstanding weaknesses and inequalities of America’s medical system. Prospective and current medical school students, too, have become concerned about issues of access and equality, in their field of study and their programs.

They’ve also had to confront the paradoxes emerging in medicine: Health care workers are more necessary than ever, but working nurses and doctors are on the verge of burnout amid the months-long third surge of infections. As of late January, more than 100,000 patients are currently hospitalized across the country with Covid-19. Hospitals, especially those in major metropolitan areas, are overcrowded and short-staffed.

Despite the deluge of patients, medical workers have had to contend with hiring freezes, layoffs, contract negotiations, and shortage of personal protective equipment. About 1.4 million health care jobs were lost in April 2020, and while employment has recovered as states opened back up, the pandemic placed enduring strain on how the US health care system operates.

Young adults in the health care industry — or those preparing to enter it — are aware they’re at the foot of the ladder. Many college graduates take on low-paying or volunteer roles in clinics and hospitals, and might not even receive priority for vaccines. (At Stanford, nearly all of its medical residents and fellows, who regularly treat Covid-19 patients, did not receive vaccine priority.) On the other hand, medical students eager for patient experience have lost out on clinical opportunities. Medical school applicants, residents, clinic assistants, and nursing graduates recognize how entry-level jobs are harder to come by across the board, and for many, the lesson of the pandemic is learning to settle for less-than-ideal positions to guarantee employment.

Briana, a former medical assistant from Phoenix, Arizona, felt that the pandemic was a sudden but necessary “reality check” for her career. Briana, who asked to not publish her last name out of privacy concerns, is immunocompromised and works for a clinic that primarily serves the Native American population in Arizona. However, her transition from a patient-facing position to a departmental role took two months, and she felt pressured to be in the office or risk losing her job.

“I felt that [my managers] didn’t really care that I had an autoimmune disorder,” Briana told Vox. “They obviously should care more about the patients, but if they don’t have any healthy employees, then they’re not going to be able to treat them.”

For Jasmine Wong, a recent graduate and working nurse in the Bay Area, risk was top-of-mind while she was interviewing for openings. “I asked during my interviews with different hospitals if there was enough PPE provided,” she said. “Navigating the job hunt during Covid was already very difficult because hospitals were on hiring freezes, and many just didn’t have a budget to train new nursing grads.”

“Hospitals were on hiring freezes, and many just didn’t have a budget to train new nursing grads”

While most job interviews were conducted over Zoom, a departure from traditional norms, Wong felt that the roles were competitive, especially for nursing positions in adult ICUs. In pre-pandemic times, cinching a job after nursing school depended on a person’s professional network — relationships at hospitals they’ve previously volunteered at. Despite Wong’s volunteer work at UCLA Medical Center, the hospital wasn’t hiring, and she eventually accepted an offer in a pediatrics ICU elsewhere.

“I feel like about 75 percent of people I know from our program have found jobs, but I don’t think people got positions they necessarily wanted,” she said. “Most of us didn’t have ICU experience, so it was difficult to compete with those who do.” Some of her peers are in non-hospital settings, and some are swabbing at local Covid-19 testing sites.

Funding from Congress has provided some relief for hospital systems across the country, but many are losing money as a result of halting elective surgeries. According to the Washington Post, monthly patient revenue has declined by tens of millions of dollars, and many were already losing money on patient care prior to the pandemic. “There is this conception that nurses are needed, but many want experienced nurses and not new graduates,” Wong said.

Meanwhile, medical school admissions officers are boasting record-level increases in applicants. They are attributing renewed national attention toward health care to the coronavirus pandemic, dubbing the phenomenon “the Fauci effect.” (The Association of American Medical Colleges did not share specific figures with Vox, but said that applications are 18 percent higher than they were at this time last year.)

Some applicants, however, say the pandemic has thrown a wrench in a time-intensive and financially draining process. They are challenging the premise that it had any significant effect on present-day admissions, and that it’s highly improbable for people to apply to medical school on a short-term notice.

“I spent two years saving up money to take three months off work and to afford the application fees,” said Erica Crittendon, who received an offer from the University of Washington. She applied to 28 schools and invested thousands of dollars into the process, which she described as “one of the most grueling periods” of her life. Crittendon was simultaneously reeling from several Covid-19 losses in her family, and as a Black applicant, felt affected by the summer’s protests over police brutality.

“A person needs to be incredibly privileged to pull off a last-minute application,” she told Vox. “The pandemic narrative is just highlighting privileges that are detrimental to medicine and health equity.”

Hey, @AAMC_MCAT — canceling exams the morning of is never acceptable. These students need actual answers and a PLAN that won’t further disadvantage them. That means you all need to be speaking directly with medical schools and taking responsibility for them not having scores.

Rachel Lutz, a University of Oregon graduate who is awaiting an offer, said that her MCAT exam was rescheduled and canceled several times between March and August, which delayed her application. Schools weren’t consistent about dropping the MCAT exam requirement, which meant most applicants needed to still take the exam to apply to a range of programs.

Lutz’s clinical opportunities were canceled, and she moved in with her parents to save money. “Applying was very stressful and upsetting at times, but I was privileged in that I didn’t have to seriously consider not going through with it,” she told me. “I don’t think taking another gap year would outweigh future earnings for me, but I know people had to make that tough decision.”

Some say the circumstances of the pandemic — and the lack of leniency from admissions officers and schools — have excluded hundreds of prospective applicants. According to the advocacy group Students for Ethical Admissions, only those with significant amounts of financial privilege and economic support can manage to apply amid the many changes in the process.

“There are many students who are now lost to the application process,” a spokesperson for SEA told Vox. “That’s a loss of diversity, of competent and capable individuals, just because the application process was so woefully mismanaged.” The Association of American Medical Colleges published a response addressing applicants’ concerns in July, but students felt that the acknowledgment changed little about the process. “The pipeline in medicine is already very leaky,” said the SEA spokesperson. “It’s disappointing that this year, the academic medicine community seems to have shrugged its shoulders.”

The applicants and health care workers who spoke with Vox firmly believe that medicine is their vocation. Yet, the coronavirus has stymied their pursuits at almost every level, from delaying licensing exams and required tests to eliminating opportunities for key clinical work that would aid their job search. The pandemic’s lasting effects on their careers and livelihoods won’t easily be forgotten.

ICE tried to fine immigrants living in sanctuary churches. Now, it’s backing down.
Trumpism, not polarization, drives America’s disastrous coronavirus politics
Why are liberals more afraid of the coronavirus than conservatives?
The sexual assault allegations against an officer involved in Breonna Taylor’s killing say a lot abo...
Polls show Biden and Sanders are probably going to split Warren’s voters
Silicon Valley is throwing Trump a fundraiser. They’d just rather not talk about it.