The paradox of Nikki Haley 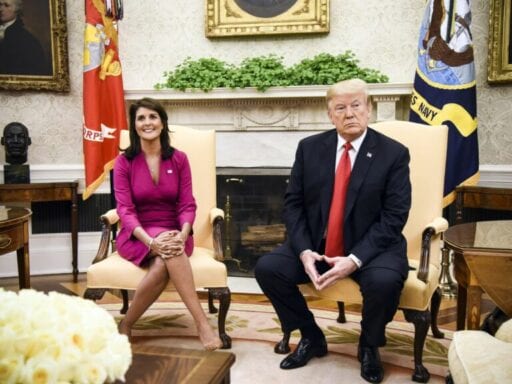 When Nikki Haley’s time as America’s ambassador to the United Nations ends later this year, her defining legacy will be both as a staunch enforcer of Trumpism and as someone who simultaneously executed traditional Republican foreign policy.

Haley showed over her two years on the job that she could toe President Donald Trump’s line when needed, which was most evident when it came to Middle East issues. She openly vowed to punish countries that wouldn’t support the move of the US Embassy in Israel to Jerusalem, and berated Iran for its aggressive behavior in the region.

But most observers note how she did her job just as her mainstream predecessors would have. “I think she’s been as close to a traditional Republican UN ambassador as you can have in a very untraditional Republican administration,” David Bosco, a UN expert at the University of Indiana Bloomington, tells me.

Like those before her, Haley worked with other countries to achieve big American goals, like placing stringent sanctions on North Korea to induce it to give up its nuclear program. She strongly chastised UN bodies that America perceived to be working against Washington and its allies.

And Haley, unlike Trump, used her prominent platform to champion human rights while lambasting Syria and Russia for killing scores of men, women, and children with chemical weapons and bombs.

The former South Carolina governor pursued those and other initiatives while maintaining a fairly cordial relationship with the president. That she left the administration amicably — without a Twitter announcement or reprimand — shows how deftly she played her game.

Haley may look to ride her rising star into the Oval Office, perhaps in 2024. But even if she fails in that ultimate aim, her time at the UN will likely secure her place as one of Trump’s best-ever Cabinet members.

“Haley has to go down as a pretty effective representative of the US at the UN,” says Richard Gowan, a senior fellow at the UN University, a research and academic institution affiliated with the organization.

Haley was willing to “take names” for Trump

Haley, once a prominent member of the Never Trump movement, pushed many of Trump’s foreign policy goals in New York — mostly notably his Middle East approach.

Take how she handled Trump’s controversial decision to declare Jerusalem to be the official capital of Israel and relocate the US Embassy there.

Many UN member states rejected the move, but Haley fought back, vowing last December that the US would be “taking names of those who vote to reject Jerusalem recognition.” The UN ultimately voted against recognition, yet Trump moved the embassy to the city in May 2017 anyway.

Haley’s tough talk wasn’t just public posturing either. According to one source familiar with her private discussions, she could be somewhat abrasive with UN ambassadors as she tried to secure their support for acknowledging the new capital.

But, the source added, that kind of tough talk was rare for her, and she was widely regarded as a very cordial colleague. The source said most at the UN shrugged off Haley’s more Trumpian moments because they generally thought she treated them well off camera.

Still, some US foreign policy experts, like Kori Schake of the London-based International Institute of Strategic Studies, told me that putting countries on notice for their Jerusalem views “was incredibly damaging to America’s standing in the world.”

Haley also became one of the administration’s top spokespeople for its hardline policies toward Iran. Last December, she stood in front of a missile that she said Iranian allies in Yemen fired at an international airport in Saudi Arabia. That, she claimed, was a violation of UN law because Iran was proliferating weaponry.

“This is absolutely terrifying,” Haley said at the briefing in a hangar near the US Capitol building. “Just imagine if this missile had been launched at Dulles Airport or JFK, or the airports in Paris, London, or Berlin. That’s what we’re talking about here.”

Her presentation formed part of the administration’s budding case that it should withdraw from the Iran nuclear deal, even though Iran supplying missiles to fighters in Yemen didn’t violate the agreement in any way (only further developing Tehran’s nuclear program would have). Trump withdrew America from the nuclear accord in May.

It appears Haley supported the pro-Israel, anti-Iran narrative because she believed in it — and the fact that it happened to correspond with how Trump viewed things was only secondary, experts told me.

It also might help her with her future political aspirations.

“She will certainly leave with a record — for example, being firmly pro-Israeli — that she can continue to tout,” Bathsheba Crocker, the State Department’s top diplomat for international organizations from 2014 to 2017, told me. “But other than that, one is hard-pressed to come up with other things she firmly stood for.”

Crocker added that she doesn’t believe Haley will be remembered for much more than her Israel efforts because they “will be associated with the Trump administration writ large, rather than Haley herself.”

Haley stayed traditional even when her boss wasn’t

Haley may be most remembered for the many times she did what Trump wouldn’t: advocate for human rights and criticize Russia.

On April 4, 2017, Bashar al-Assad’s forces killed more than 80 people in a chemical attack. The next day, Haley went after Syria and Russia for the carnage during an emergency session of the UN Security Council.

“If Russia has the influence in Syria that it claims to have, we need to see them use it,” she said while holding up blown-up photos of dead children. “We need to see them put an end to these horrific acts. How many more children have to die before Russia cares?”

“The United States sees yesterday’s attack as a disgrace at the highest level, an assurance that humanity means nothing to the Syrian government,” she continued.

It was a stunning moment. Only three months into her time at the UN, she carved out a space for herself as someone who would go after Moscow and speak up for the defenseless. In that moment, at least, she was decidedly unlike Trump, who has consistently failed to personally lambaste Russia or President Vladimir Putin for anything. However, he has twice attacked Syria for its use of chemical weapons.

Defending human rights would become a theme for Haley. She called for Nicolás Maduro, Venezuela’s leader, to step down because of how he bankrupted the country, and went after longtime GOP villain Cuba for blocking members of its civil society from contributing to a human rights report.

“[T]he Cuban government can’t silence the United States,” she said on May 16. “We will continue to stand up for the Cuban people and get loud when the Cuban government deprives its people of their human rights and fundamental freedoms and robs them of free, fair, and competitive elections, denying them the opportunity to shape their country’s future.”

Even some of her more questionable moves were routine Republican foreign policy.

She publicly made the case for America’s gradual withdrawal from the UN, for example, pulling the US out of the organization’s Human Rights Council and the United Nations Relief and Works Agency, a program that administers aid to millions of Palestinian refugees, during her tenure. Past GOP administrations have also pulled out of UN bodies they didn’t like, according to Bosco, so Haley was well within the mainstream in pushing for those moves.

Haley got sanctions on North Korea passed at the UN

Haley’s biggest accomplishment at the UN, though, won’t be her moral stances but her ability to push harsh sanctions on North Korea through the UN Security Council last year.

Trump spent most of 2017 threatening to bomb North Korea if it continued to threaten the US and its allies. But at the UN, Haley pursued a diplomatic approach as part of the administration’s “maximum pressure” campaign. The idea was that such widespread sanctions would squeeze North Korea financially to the point that it had no choice but to consider ending its nuclear program.

To do that, though, she needed approval from the UN Security Council — a tough thing to get. China and Russia, two of North Korea’s top allies, are also permanent members of that body, which gives them veto power over any initiative. If either one voted against the sanctions proposal, it would’ve made it harder to impose sweeping multilateral sanctions on Pyongyang.

But in August 2017, she got China, Russia, and the rest of the Security Council to approve the financial penalties on North Korea. The measure included a full ban on Pyongyang’s top exports like iron and coal, reducing the country’s revenue by about $1 billion. The following month, the council strengthened its sanctions even further by banning the sale of natural gas liquids to the country. That economic pressure has lessened in recent months, in part because of the good feelings between Trump and North Korean leader Kim Jong Un, but the sanctions remain in place.

North Korea’s aggressive missile testing in 2017 — including launching a missile in July that could conceivably hit all of the United States — surely helped persuade China, Russia, and others to agree to pursue the American approach. But that takes nothing away from Haley, who personally had to convince reluctant parties to follow the US.

“She did a genuinely impressively job,” Gowan told me. So much so, in fact, that those in the Trump administration and the UN’s halls might be sad to see her go in two months.

“I think she will be missed,” he continued.

10 Things I Hate About You is as fresh as ever, even 20 years later
Trump says US Covid-19 deaths would be low if you excluded blue states. That’s wrong.
Did Trump commit bribery? I asked 7 legal experts.
Most Americans believe Trump lied to them, but think impeachment is a bad idea
Live results for the Texas Democratic primary
Facebook bans Alex Jones, Infowars, Louis Farrakhan, and others it deems “dangerous”