The Parent Trap, Meredith Blake, and the ongoing reclamation of “bitch” 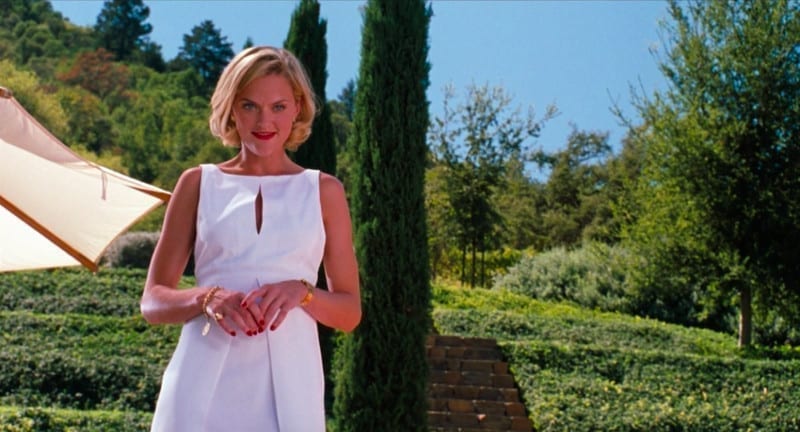 Elaine Hendrix is Queen Bitch, a term of endearment used among her and her friends. The word “bitch” has of late taken on a new life for the actress, thanks in part to a generation of young women raised on her confident, scheming characters in late-’90s features like Romy and Michele’s High School Reunion and Superstar.

But the ’90s role Hendrix is most commonly identified with is Meredith Blake, the stepmother-to-be trying to stop the machinations of two precocious twins (both played by Lindsay Lohan) in the 1998 remake of The Parent Trap. For many ’90s kids, Meredith Blake was the woman you loved to hate: A post on Twitter last month featuring photos of Hendrix in character declared “Kids today will NEVER know how much we HATED this woman.” It exploded, garnering more than 68,000 likes.

But things took a turn once Hendrix retweeted it, leaning into the Meredith Blake persona and saying, “I will ship every one of you brats off to Switzerland.” It now has more than 750,000 likes, and supporting Meredith Blake has become a meme.

I will ship every one of you brats off to Switzerland. https://t.co/Gr1SSJmADJ

With The Parent Trap remake celebrating its 20th anniversary this week, it’s only now that Hendrix is realizing the impact her performance has had on women today. “People [used to say], ‘God, I loved you because you were such a bitch,’” she told me. “And the younger generation is now saying, ‘God, I love you because I want to be you.’”

It’s this bitchery that’s at the heart of why fans today are embracing Meredith, a flatly villainous character who’s blossomed into an unexpected object of reverence. Where the character was once a “bitch” in the sense that she’s evil, those who grew up with her have begun to recalibrate that appeal, using the word and the character to showcase a dominant, confident woman whose ambition is empowering.

Meredith Blake was always an unrepentant bitch. But the implications of that are changing.

The Parent Trap was inspired by the 1936 Deanna Durbin drama Three Smart Girls and released by the Walt Disney Company in 1961. British actress Hayley Mills played twins separated at birth who scheme to get their parents back together, and the remake follows a similar path, this time with the twins played by Lohan. Where the original shied away from elaborating too much on the complications of divorce and remarriage, the 1998 remake addressed a generation for whom divorce had become much more commonplace.

But regardless of the culture, The Parent Trap is a fairy tale, and every good fairy tale needs a witch.

Enter The Parent Trap’s “Cruella,” blonde, leggy publicist Meredith Blake, who is determined to marry vineyard owner Nick Parker (Dennis Quaid). At first Meredith attempts to bond with Nick’s daughter, Hallie (Lindsay Lohan), only to be rebuffed by the little girl, who knows the woman is bad news. Once Hallie is united with her twin sister, Annie, the gloves come off between the trio.

“It was actually a last-minute audition,” said Hendrix of the role, which she got “the good old-fashioned way,” performing opposite both Quaid and Lohan in a screen test. Though Hendrix is now identified with the part, she was far from the first choice — in fact, Hendrix was told she was the 433rd actress they tested.

As Vogue editor Lisa Luder in Romy and Michele, Hendrix was a popular high schooler torn between her interest in the outcasts played by Mira Sorvino and Lisa Kudrow and her pretty cheerleader friends. But in that feature, as with The Parent Trap, Hendrix demonstrates what a ’90s career woman looked like: elegant, assertive, and derided for avoiding marriage and children.

While Hendrix smirks that her penchant for villainy is “because I’m evil,” she clearly just understands what to bring to the role. When asked what she thinks director Nancy Meyers saw in her when she was cast in The Parent Trap, the actress said, “I happened to fit the prototype” of what Meyers sought. Meredith was in Hendrix’s “wheelhouse. She’s that type of attitude, that type of confidence, that type of iciness; I relate to [her] more easily than I do other types of characters.”

As for what makes audiences in 2018 worship Meredith Blake, Hendrix thinks it’s that the perception of unrepentant cattiness has transformed into one of capable dominance. As Hendrix says, Meredith “is successful in her own right.” She’s a publicist who’s created a life for herself before meeting Nick Parker. Her drive for money is evident — she tells her father Nick is everything he dreamed his daughter would marry, “plus millions more” — but it’s only a means of moving herself up the ladder of power. She’s a character who wants power and money, but for audiences today, that’s less inherently villainous. “It’s okay to say, ‘I want to have money.’ There’s not such negative stigma on it,” says Hendrix.

Meredith’s antipathy toward children also might also have deeper resonance with women who are increasingly waiting to have children, if they have them at all. What was once a symbol of frigidity is becoming the new normal.

Hendrix says Meredith is like her in that respect: “I don’t have kids. I’m not set up to be a mom. More and more women are choosing that path. It’s more acceptable now for a woman not to want to have kids.”

But Hendrix acknowledges the extremities of the character, who is there to create a clear-cut villain and put the narrative on the road to the reunion and second honeymoon of Hallie and Annie’s parents. Hendrix says, in reality: “If I were with a man who had kids I wouldn’t feel the need to ship the kids off to Switzerland. That’s, again, where [Meredith] falls a little bit more to the ‘bitch’ line.”

The word “bitch” holds many connotations in popular culture, and its primary association is still of a difficult and unpleasant woman, which still has destructive implications in our current era: The #MeToo and Time’s Up movements have highlighted the fact that being labeled a bitch can become a permanent black mark on an actress’s reputation and career. But the word has also been the subject of an ongoing reclamation, applied to women like Meredith Blake, a prime example of the best connotations of the term: an unrepentantly aggressive, stylish woman who knows what she wants and doesn’t take guff from anyone.

In 2015, Gloria Steinem urged women to “reclaim” the word “bitch,” marking the word as powerful because of its attachment to assertive women. And it’s that very celebration of assertiveness that’s at the heart of the reclamation of Meredith Blake.

As Elena Nicolaou writes in an article for Refinery29 about getting “justice” for Meredith Blake, the character is “fully realized … with ambition, drive and vulnerability.” Meredith is a character who, to many, is persecuted because she’s young and beautiful, with the implication that she’s too sexual. As Meredith says in the movie, and as Hendrix recently reiterated on Twitter, “Being young and beautiful is not a crime, you know.”

Being young and beautiful is not a crime you know. (Doing my best Meredith Blake.) #ParentTrap20 #ForYour411 pic.twitter.com/lgi2Wy7Ank

Meredith Blake also highlights how the term “bitch” is often a term based in appearance and assumption: As Meredith’s Twitter defenders are quick to point out, Hallie and Annie create their own hell by antagonizing a woman they don’t know. Meredith attempts to bond with Hallie upon their first meeting, and only responds with bitchery after Hallie continually provokes her. The girls set her up to fail because of their own arguably questionable motives — reuniting their parents — which don’t get a fraction of the scrutiny Meredith’s supposed bitchery does.

In Meredith’s case, the term “bitch” is being applied to an assertive woman who refuses to “sit at home and knit” while her fiancé gallivants in the woods with his ex-wife. She’s willing to tromp out into the woods as proof of her determination.

In some respects, the 1990s were all about embracing one’s inner bitch. With Meredith Brooks’s “Bitch” in regular rotation on the Top 40 and the Spice Girls talking about the need for “girl power,” the decade was marked by femininity and strength that was often misconstrued as unpleasant and unnecessary. As Justine Champine writes in an article that situates Meredith as a queer femme icon, the character’s “femininity wasn’t soft; it was sharp and intimidating and did not serve to make anybody else feel comfortable.”

When Hendrix, who said she was “raised on Gloria Steinem, Marlo Thomas, and Ms. magazine,” is asked about her feelings on the word and its reclamation, she is of two minds.

“There’s the empowering way to use ‘bitch,’ but then there’s also the negative way, like, ‘God, she was such a bitch.’ Like she was ‘nasty,’ she was ‘mean,’ ‘rude,’” she said. The problem lies in who wields the power of language itself. With the world currently divided, she wondered, “Which group of people gets the ultimate say?”

Hendrix had a feminist upbringing, describing her mother as a proud woman who might not have gone as far as “burning her bra” but who instilled in her daughter many of the traits that have been celebrated as positive yet are just as easily castigated as proof of being a bitch. So it’s appropriate, in a way, that this the cycle of inspiration has found a continuation of sorts in the love the actress is now receiving for playing Meredith Blake.

Witnessing the unexpected legacy of her characters is still new for Hendrix, but she said it makes her feel that she’s building on what her mother taught her. “I’m hearing about this whole new generation who’s relating to me, and it’s like, ‘Wow!’ I was standing on my mom’s shoulders and now other women are standing on mine? God, that’s cool.”

The Enduring Appeal of the Terrible, Horrible, No Good, Very Bad Processed Snack
Who is Andrew Gillum? Meet Florida’s history-making Democratic nominee for governor.
Despite temporary fix on immigrant children, issue expected to rumble into Florida Senate race
Older and immunocompromised people don’t deserve to be second-class citizens
The best movies of 2020, so far
Coronavirus treatment research is being held up by Trump’s ban on the use of fetal tissue