The partisan culture war over masks 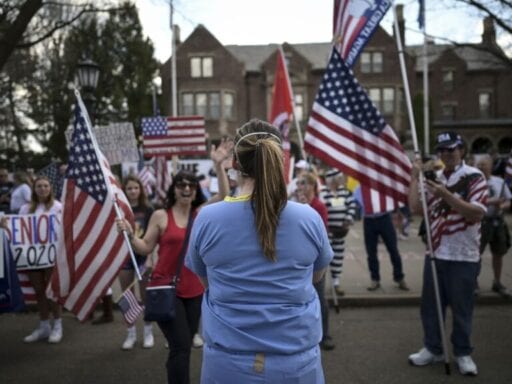 One conservative writer’s viral rant explains how a basic public health measure become another front in the culture wars.

Wearing a mask is one of the easiest ways to contribute to the fight against coronavirus.

Infected people wearing masks are less likely to spray virus-containing droplets onto others, which means that universal mask-wearing should, in theory, make everyone safer. There’s some evidence from across the world that suggests the widespread use of masks has played a role in reducing coronavirus transmission. Studies on mask-wearing generally support it, finding that masks generally provide at least some protection. At worst, masks are a low-cost intervention that might help at the margins.

But in recent weeks, mask-wearing in the United States has become another flashpoint in the partisan culture wars.

President Trump refuses to wear a mask in public appearances — including one at a factory that produces masks — or in his office, despite a recent outbreak among the White House staff. Vice President Mike Pence opted not to wear one when he was visited the Mayo Clinic, a prominent medical facility in Minnesota that’s treating coronavirus patients. Many Republicans in Congress have opted not to wear masks on the House and Senate floors, despite several members of their caucus testing positive for the illness earlier this spring.

People tend to take signals from their political leadership, and rank-and-file Republicans appear to have gotten the message. New research from three political scientists — Syracuse’s Shana Gadarian, UC-Irvine’s Sara Goodman, and Cornell’s Tom Pepinsky — analyzed polling data on over 2,400 Americans’ attitudes and self-reported behaviors during the pandemic. They find that, after controlling for “a full set” of confounding variables, partisanship is a fairly strong predictor of one’s likelihood of wearing a mask.

“Democrats are more than 20 percentage points more likely than Republicans to (75% versus 53%) to report wearing masks in public,” Pepinsky writes in a blog post summarizing their findings. “Mask-wearing levels are consistently lower across the board in states that voted strongly for Trump.”

Why would Republicans treat masks as a partisan issue?

A series of tweets from R.R. Reno, the editor of the conservative religious magazine First Things, is clarifying: In a diatribe that went viral on Tuesday night for all the wrong reasons, Reno praised Trump for failing to wear a mask when meeting a group of World War II veterans — and went on to describe the very idea of masks as a kind of surrender:

By the way, the WWII vets did not wear masks. They’re men, not cowards. Masks=enforced cowardice.

Just to reinforce. Talked to my son in Seattle. The mask culture if fear driven. Masks+cowardice. It’s a regime dominate by fear of infection and fear of causing of infection. Both are species of cowardice.

Look, let’s face it. There are those who are terrified, and those who are not. Where do you stand? Terror or a more reasonable position? Will you visit our mother? If so, the mask is a PC gesture. If not, you are a moral monster.

Reno has written a lot of goofy stuff during the coronavirus epidemic. But what he’s saying here tells us a lot about the right’s approach to coronavirus more broadly.

The first thing that leaps out is that the anti-mask crusade reflects a particular vision of masculinity. Reno’s reframing of an obvious public health measure as a kind of cowardice, something tough World War II veterans would never do, is a thinly veiled way of calling protective masks unmanly. As my colleague Anna North argues, this strain of anxious masculinity is a consistent theme in anti-mask arguments on the right.

The second is the argument that mask-wearing is a form of “political correctness.” Reno’s reasoning is incoherent — if you’re willing to visit your mother, presumably you should take mask-wearing even more seriously — but it illustrates the category of thinking he’s relying on here. The question in his mind is not “does wearing a mask contribute to public health,” but rather “what does wearing a mask say about where I stand in the culture war.” He sees the issue not through the lens of substance, but of symbolism.

When you look at the the broader Republican response to masks through the lens of Reno’s thinking, it starts to make a lot more sense. This is a political movement that has been built to wage a culture war; it has no greater objective than owning the libs. And the best way to own them is to defeat them in combat over identity: gender, race, sexuality, and the like.

The war on masks is a way of taking a public health crisis — a situation that demands political unity and best practices in governance — and reshaping it into a culture war competition. The question is not “are we doing a good job handling this” so much as “whose team do you want to be on, the namby-pamby liberals or the strong fearless conservatives?”

It is difficult for members of the modern organized conservative movement to see political issues outside the lenses of partisanship and the culture wars. At a time when unity on public health matters is paramount, on issues ranging from masks to testing to the timing of reopening, this is dangerous.