The past 24 hours in Syria news, explained 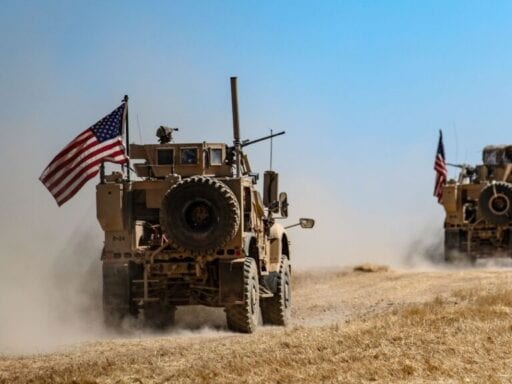 Share
Loading...
A US military convoy takes part in joint patrol with Turkey in the Syrian village of al-Hashisha on the outskirts of Tal Abyad town along the border with Turkey, on September 8, 2019. | Delil Souleiman/AFP/Getty Images

US troops leave for Iraq. Trump rejects a plan to keep some service members in northern Syria. And he gets accused of encouraging genocide.

The effects of President Donald Trump’s decision to withdraw US troops from northern Syria continue to ripple throughout the country and into the broader Middle East. The last 24 hours saw a major shift in the way the US will handle the crisis there over the coming weeks.

US troops withdrew to Iraq early Monday morning as part of the Syria drawdown, leaving less as allies than abandoners: Kurds in both countries threw rotten fruit and stones at the 500-strong convoy. While American forces will continue to combat ISIS from there, regional Kurds are upset that US military power won’t back or protect them any longer.

That news came on the heels of a Sunday revelation that Trump favors retaining roughly 200 US troops in northern Syria to fight ISIS insurgents and keep oil fields out of the hands of the Syrian and Russian governments. Defense Secretary Mark Esper, though, says he hasn’t yet made a decision on the plan or even presented it to the president. But if executed, it would reverse Trump’s oft-repeated desire to fully leave Syria and “end endless wars.”

Also on Sunday, Mustafa Bali, the top spokesperson for the Kurdish-led Syrian Democratic Forces in northern Syria, called on Trump to stop “encouraging the ongoing genocide campaign” by Turkey. Trump has yet to stop Ankara-backed forces from killing Syrian Kurds in the region — the same ones that helped US troops destroy ISIS’s territorial caliphate — and instead has claimed the ceasefire American brokered is steadfastly holding.

If you missed any of this because you actually wanted to enjoy your weekend, don’t worry. We got you covered.

US troops leave Syria for Iraq. Some Kurds say “fuck you.”

Trump vowed that US troops would leave Syria in order to end America’s involvement in another endless war. It turns out that many have indeed left the country — to go right over the border into western Iraq.

About 500 US personnel crossed over into Iraq from Syria early Monday morning in hundreds of armored vehicles. Some were recently seen in Duhok, a city in Iraqi Kurdistan about 40 miles from the Syrian border. Days earlier, Esper told reporters that the 1,000 American service members in Syria would go into western Iraq to “help defend” the country and “perform a counter-ISIS mission as we sort through the next steps.” The withdrawal, though, will take weeks to complete as the Pentagon aims to ensure the safety of the force as they leave Syria — leaving many other US personnel in the country for now.

The Iraq move constitutes a major shift in the way the US military will operate in the region. Without many troops in Syria, it will be harder to track ISIS terrorists as they take advantage of the chaos to recruit more members, settle scores, and bust detainees out of makeshift jails. Syrian Kurdish fighters, meanwhile, are having to both combat advancing Turkish forces and fend off terrorists.

So if you’re thinking, “I bet the Kurds are angry about all this,” you’d be right.

As the retreating American convoy whipped by in Syria, it was greeted with locals flashing signs like “Thanks for US people but Trump betrayed us.”

In Qamishli, a northern Syria town near the Turkish border, local Kurds could be seen throwing rotten fruit and stones at the convoy.

Locals in Qamishli, Syria are throwing tomatoes to US forces who are withdrawing from the Kurdish majority city pic.twitter.com/U3v2vooNCv

And once US troops entered Iraq, Kurds there weren’t too happy with what they saw either: Some threw rocks and repeatedly chanted “fuck you” at the Americans. (Vox hasn’t been able to independently confirm these videos, but they come from trustworthy sources.)

This was somewhat to be expected. Kurdish fury across the Middle East has grown since Trump’s decision to withdraw US troops from Syria on October 9, a move which paved the way for Turkey’s incursion into the country. Hurling spoiled fruit and other projectiles at the US convoy is just the latest expression of that displeasure.

It won’t amount to much, though, as the damage is done: American forces are now mostly in Iraq, leaving the Kurds in Syria to fend for themselves.

Or maybe not entirely…

Trump may leave behind a small force in northern Syria

On Sunday night, multiple reports indicated that Trump may keep some US troops in northern Syria after all.

Per the plan, about 200 service members would stay in the area with the main mission to fend off ISIS and retain Kurdish hold of oil fields that could fall into Russian or Syrian hands. Trump has long called for the US to “take the oil” as American forces fight in the Middle East.

Some reports say Trump is leaning toward approving this idea (which apparently comes from Sen. Lindsey Graham (R-SC), who’s normally a staunch Trump ally but currently an opponent on the Syria withdrawal). But Esper, the Pentagon chief, told reporters in Afghanistan on Monday that he’s still weighing the proposal himself and has yet to brief Trump on it.

However, Trump seemed to push back on this during a Cabinet meeting at the White House on Monday. “I don’t think it’s going to be necessary,” he told reporters. “I don’t want to leave any troops there. That’s very dangerous territory.”

But if Trump does leave any number of troops in Syria — which seems likely at this point — it would be his second incomplete pullout in 10 months.

Last December, Trump said he wanted all 2,000 US troops there at the time out of the country. He even released video on Twitter — where else? — at the time saying that “it’s time to bring our great young people home!” That decision was quickly reversed, though the troop total did get cut in half by March.

It’s therefore possible that despite all his promises to end endless wars, Trump may soon authorize America’s continued presence in Syria.

Syrian Kurdish fighters to Trump: backing Turkey’s invasion “is by far the greatest insult to our people so far”

As mentioned above, many Kurds in the Middle East aren’t pleased with Trump’s decision to withdraw US troops from northern Syria. But what angered them most recently is that Trump keeps backing Turkey’s invasion of the country, despite evidence that it’s killing Kurds.

The US helped broker a ceasefire in Syria with Turkey last week. And while top US officials like Esper say it “generally seems to be holding,” there is strong evidence that it’s not.

Last week, the New York Times reported that shelling and gunfire could be heard in the town of Ras al-Ayn, including by some people over the border in Turkey. The Syrian Observatory for Human Rights, a UK-based conflict monitor, found that Turkish forces targeted medical and aid organizations — including an unnamed American one — in the town to stop the evacuation of injured civilians. Journalists at AFP even captured airstrikes exploding in the area.

Trump, however, seems to be fine with what’s happening. He falsely tweeted a quote from Esper saying “the ceasefire is holding up very nicely” (a corrected tweet, in fact, showed the president identifying the Pentagon chief as “Mark Esperanto”).

Here’s what the defense secretary actually said, based on the Pentagon’s own transcript of his comments on Saturday.

That, no question, was an own goal by the president. But it had a greater impact than just misquoting a Cabinet official. It showed Trump siding with Turkey during the “ceasefire,” despite the atrocities its forces have been committing.

So — surprise, surprise — Syrian Kurdish fighters called Trump out for the tweet. Most notably was a comment made by Mustafa Bali, the chief spokesperson for the Kurdish-led Syrian Democratic Forces on Sunday evening:

Encouraging the ongoing genocide campaign is by far the greatest insult to our people so far. With all due respect, Mr. President, what makes you think you have the right to drive millions of Kurds out of their homes and resettle them elsewhere? Isn’t this ethnic cleansing? https://t.co/FZ45jRcqie

Let’s be clear about what happened here: This is a top spokesperson for the former key US ally in the fight against ISIS saying the president is “encouraging the ongoing genocide campaign” by Turkey, adding, “Isn’t this ethnic cleansing?”

For what it’s worth, some former top US generals seem to agree with Bali. David Petraeus, the retired four-star Army general who led troops during the Iraq War and directed the CIA, said Sunday on CNN’s “State of the Union” program that what’s happening at the Turkish-Syria border “certainly is ethnic displacement. And, arguably, it may turn out to be ethnic cleansing.”

None of this may matter to Trump, who recently called his decision to take troops out of Syria “strategically brilliant” for the United States. But this weekend showed that what’s going on deeply matters to the region’s Kurds.

The fatal arrest of George Floyd, a black man kneed in the neck by police, explained
Kentucky’s Republican governor is facing a tough race — and he wants Trump to save him
These 2 questions will determine if the coronavirus becomes a deadly pandemic
Putin invites Trump to Moscow in a blatant power play
Immigration is no longer a winning issue for Trump
Syria’s Idlib was already a humanitarian nightmare. Now the coronavirus has arrived.