The past 3 wild days in Trump’s trade war with China, explained 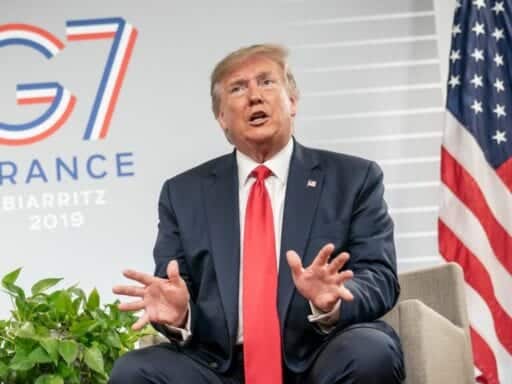 President Trump sent financial markets on a roller coaster over the weekend, raising tariffs and making dramatic threats to force American companies to stop locating production in China, only to calm things down with some conciliatory statements Monday morning that suggested the US and China are poised to head back to the table.

The back-and-forth reflects the fundamental tension of Trump-era trade policy. On the one hand, the president is deeply convinced that bilateral trade deficits are harmful and therefore aggressive “trade war” measures give him the upper hand. On the other hand, the president follows the stock market closely and keeps seeing that investors don’t share his assessment, which tends to pull him back from the brink.

The impact on the real world, meanwhile, is less dramatic than the gyrations of the stock market, but it points clearly toward higher taxes on most Americans and an unsettling environment for business investment.

The trade war so far

Dating back to well before Trump took office, the United States had a longstanding list of complaints with Chinese economic policy. Some American businesses complain that they are forced into “unfair” competition with Chinese state-owned firms that benefit from government subsidies. Others complain that when they do business in China, Chinese companies steal their intellectual property or the Chinese government forces them into unfavorable joint ventures with Chinese-owned companies.

These complaints, when you think about it, are actually rather different from the standard manufacturing community concern that cheap Chinese labor is undercutting American production. US business wants China to change the rules to make it easier to do business there, and most of what the American government is asking for is along those lines.

What’s new under Trump is a spirit of confrontation where the president has imposed multiple rounds of taxes — tariffs — on Chinese imports. China has in turn retaliated with curbs on American imports.

In standard economic understanding, these tit-for-tat moves simply hurt both countries’ economies. But Trump has often articulated the view that tariffs are good per se, sometimes because China pays the tariffs (it doesn’t) but also sometimes because Trump views the US-China trade deficit as a case of America “losing money” to China (it isn’t).

Consequently, Trump’s view is that a total breakdown in US-China trade would hurt China but not America, and thus that threatening such a breakdown should force China to make concessions. His problem is the stock market doesn’t agree.

Trump keeps going back and forth

There’s no real way to resolve this tension, so instead of resolving it, Trump keeps going backward and forward. Back on August 13, he pleased financial markets by delaying previously scheduled tariff increases until after Christmas.

But then Trump got ornery and announced tariff rate increases on August 23, though without canceling the delay.

Then there were reports over the weekend that Trump was having second thoughts about the tariff hikes, and then contrary reports that the only regret he had was that the rates weren’t higher.

He also tweeted an “order” to US companies saying they would have to leave China, which mostly generated mockery, but he followed up with a specific citation of the International Emergency Economic Powers Act, which does indeed give the president some very vaguely worded authority over international trade.

For all of the Fake News Reporters that don’t have a clue as to what the law is relative to Presidential powers, China, etc., try looking at the Emergency Economic Powers Act of 1977. Case closed!

Trump had previously threatened to invoke IEEPA to raise tariffs on Mexican goods (which would otherwise violate the terms of NAFTA), but the US and Mexico ended up resolving the issue in a way that meant this kind of abuse of discretional authority never got a real test in Congress or the courts. It’s far from clear that invoking it in the way Trump threatened would really work, but it’s also possible that it would.

That left investors really nervous, but then Monday morning Trump told reporters, “China called last night our top trade people and said ‘let’s get back to the table’ so we will be getting back to the table and I think they want to do something.”

There’s very little content to that statement, but the stock market seemed to like it, and shares went up.

The basic problem with Trump’s approach of trying to hurt the Chinese economy in order to force concessions is that any steps he takes to do this also hurt the American economy.

The fact that trade tensions send stock market shares down is not, as such, particularly bad news for the economy. But the reason trade tensions send shares down is that investors believe — almost certainly correctly — that the tensions are just bad for global growth. They raise consumer prices and deter investment. So while it’s true that China is under pressure to make a deal, the pressure also pushed on Trump.

Politically, however, you can sort of see why Trump finds this approach appealing.

If at any point the whole underlying dispute does get resolved and all the tariffs and counter-tariffs are removed, that will make people very happy. At that point, he can also just assert that whatever concessions he was able to wring out of the Chinese were amazing game changers. That probably won’t be true, but there will be a lot of people disinclined to rock the boat since the resolution of trade tensions as such is good news. But until that happens, he’s likely to keep swaying back and forth, pushed by his desire to ratchet up pressure on China and pulled by the pressure the stock market puts on him.

What happened to department stores?
Justice Sotomayor warns the Supreme Court is doing special favors for the Trump administration
What Sunday’s Unite the Right 2 rally tells us about the state of the alt-right in America
Many world leaders have held national coronavirus memorials for the dead. Trump hasn’t.
The songs that made America dance in the streets this weekend
The best $20 I ever spent: My first tote bag